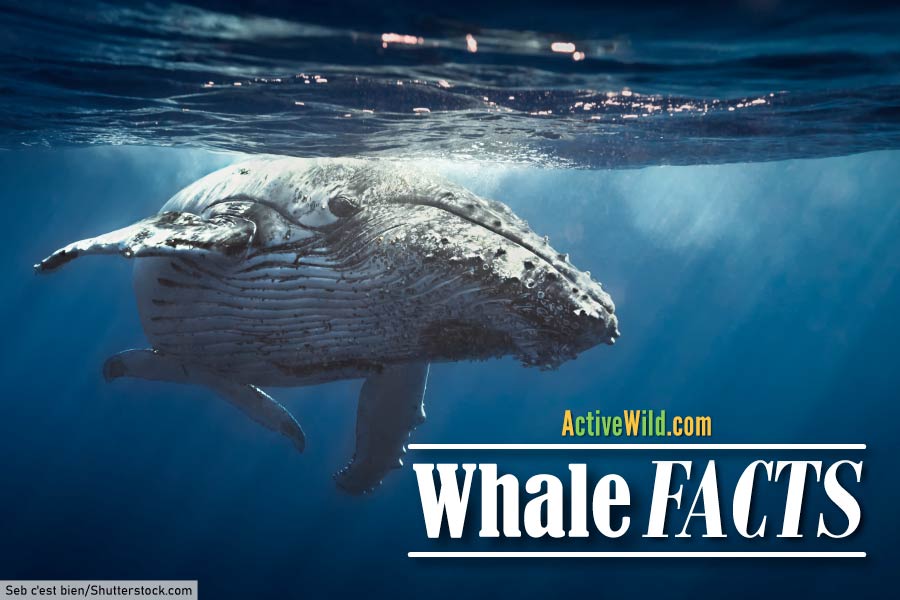 On this page you’ll find a collection of fun facts on whales, along with pictures and interesting information on whale species, ecology, threats and conservation…

What Is A Whale?

A whale is a large, fully aquatic marine mammal belonging to the infraorder Cetacea. Whales are descended from land animals, and are members of the order Artiodactyla, which also inclues hoofed animals such as cattle, deer, giraffes, and hippopotamuses. Hippopotamuses are the closest land-living relatives of whales.

Whales inhabit several different marine environments and are present in every ocean.

Being mammals, whales breathe air and are warm-blooded. Female whales give birth to live young, and nurse their calves with milk produced by mammary glands.

Whales breathe via a blowhole (or blowholes in the case of baleen whales) situated at the top of the head.

The blowhole is homologous to nostrils in other mammals. (Homologous means ‘having the same origin’.) As whales became ever-more adapted for life in the sea, their nostrils migrated to the tops of their heads to become blowholes!

Whales have many other adaptations for an aquatic lifestyle, including a streamlined body with flippers and tail fins (known as flukes) for propulsion. A think layer of fat called blubber provides insulation from the cold water.

As we’ve found, whales are members of the infraorder Cetacea. Members of this group are known as cetaceans.

The infraorder Cetacea is itself divided into two groups: baleen whales (mysticetes) and toothed whales (odontocetes).

There are 15 species of baleen whale. This group includes species such as the blue whale, humpback whale, bowhead whale and the right whales.

Baleen whales lack teeth, and feed by filter feeding. Special bristle-like structures in their mouths called baleen filter food such zooplankton, krill, and small fish from the water. Baleen whales have a pair of blowholes.

There are 73 species of toothed whale. As well as whales such as sperm whales, beaked whales, narwhal and beluga, the group also contains dolphins and porpoises.

This means that when zoologists refer to ‘toothed whales’, they might be referring to dolphins and porpoises, as well as to animals such as sperm whales and beaked whales.

Confusingly, some members of Delphinidae (the oceanic dolphin family) are known as whales. These include the killer whale (or orca) and the pilot whales.

That’s right, the mighty killer whale is just an overgrown dolphin! (But it, and all other dolphins are ‘toothed whales’!)

Toothed whales, as the name suggests, have teeth. Unlike baleen whales, they have a single blowhole.

Instead of filter feeding, toothed whales actively hunt their prey, which consists of animals such as squid and fish.

Toothed whales locate their prey using echolocation, an adaptation that allows them to obtain information about their surroundings from the reflections of sounds they produce.

Most whale species can dive for at least an hour before having to return to the surface to breathe.

The deepest known dive by a whale was made by a Cuvier’s beaked whale. It reached a depth of 2,992 meters (9,816 feet) in a dive that lasted 137 minutes; that’s almost 2 miles deep and over two hours spent without breathing!

Only half of a whale’s brain goes to sleep at a time. The other half makes sure that the whale keeps swimming and breathing. Without this adaptation, the whale would drown when it went to sleep!

A whale’s gestation period is between 11 and 16 months, after which a single calf is born. It is very rare for a whale to have twins. The calf is born tail first, which may be an adaptation to prevent it from drowning. 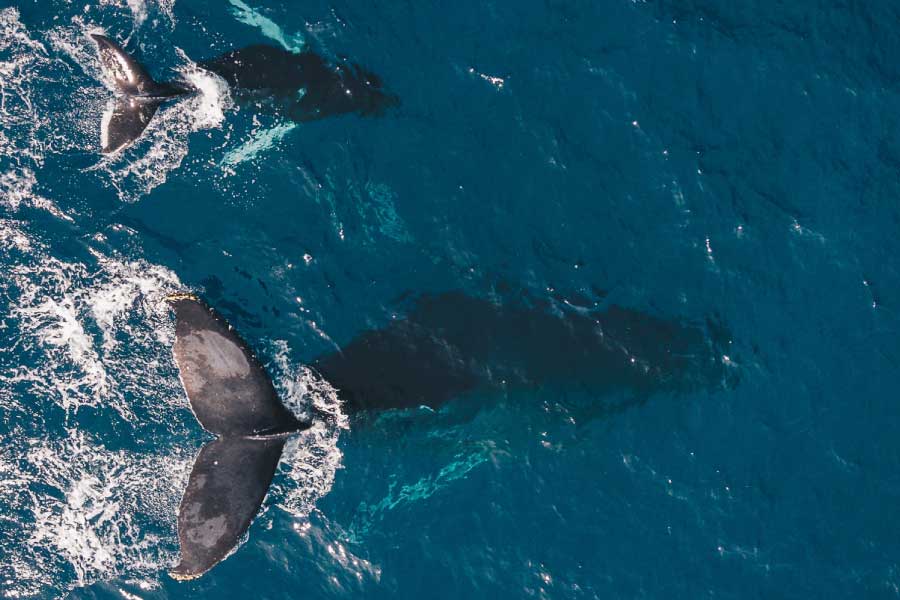 Toothed whales nurse their calves for up to three years, whereas baleen whale calves are weaned the first summer after they are born.

Whale calves grow very quickly as a result of the high amount of protein and fat contained in whale milk.

A baby blue whale can drink up to 225 liters of its mother’s milk a day and can gain an amazing 3.7 kilograms / 8.2 lb of weight in an hour!

Once weaned, juvenile whales enter a period of adolescence. They achieve adulthood upon reaching sexual maturity. The age at which this occurs differs between species, and can be between 6 and 13 years.

Several whale species are known to ‘sing’. A whale song consists of a long, complex, melodic pattern of sounds.

Perhaps the most famous singing whales are humpback whales, whose songs can last up to 30 minutes and span over seven octaves. That’s nearly the entire range of a piano!

The blue whale, a baleen whale, is not only the world’s largest animal, but also the largest animal that ever lived! This huge animal can grow to over 100 feet in length and weigh up to 200 tons. That’s the same weight as 33 elephants!

Sperm whales are the biggest toothed whales. They can grow up to 63 ft (19.2 m) in length. They also have the largest brain of any creature on earth, weighing in at nearly 20 lbs ( 9 kg). That’s six times heavier than a human brain!

Sperm whales are also the loudest whales, able to produce sounds of up to 230 decibels.

Beluga whales have earnt the nickname ‘the canaries of the sea’ due to their bird-like song.

The narwhal is known as the ‘unicorn of the sea’ on behalf of the long tusk that projects forwards from the center of its head. The tusk is actually an overgrown tooth, and is one of only two teeth the whale possesses. It is usually only male narwhals that have tusks.

Bowhead whales spend their lives in the cold waters of the Arctic. To help them to survive they have extra-thick layers of blubber to keep them warm. A bowhead whale’s blubber can be up to 27.5 in. / 70 cm thick! The species’ baleen plates can reach up to 16.4 ft. / 5 m in length.

Bowhead whales also have the longest lifespan of any whales and can live for more than 200 years!

Cetacea is part of a larger group of mammals; the order Artiodactyla. Animals in this group are known as ‘even-toed ungulates’.

As well as the cetaceans, Artiodactyla includes animals such as pigs, sheep, giraffes, cows, camels, and hippopotamuses.

The hippopotamus is the whales’ closest living relative.

It is thought that whales are descended from land-dwelling mammals that inhabited Earth some 47 – 52 million years ago. Over time these animals became ever-more adapted to an aquatic lifestyle, eventually becoming the whales, dolphins and porpoises that we know today!

The earliest whales were found in India and Pakistan.

Scientists think that the first fully aquatic whales occurred around 40 million years ago. Although these whales still had tiny hind limbs, they were too small to support locomotion on land.

As far as we know, there are only two groups of land mammals that have become fully aquatic: Cetacea and Sirenia. Sirenia, which includes the sea cows and dugongs, has followed a similar evolutionary pathway to that taken by the Cetacea.

Sadly, today several whale species are endangered or otherwise threatened. Some of the main threats to whales are listed below:

Whales often become entangled in fishing gear meant for other species. This often leads to the whales drowning.

Whales are often struck by ships, this can lead to serious, or fatal injury.

In 2017, a Cuvier’s beaked whale was found dying off the coast of Norway with 30 plastic bags in its stomach.

Microplastics, which are plastic particles smaller than 5mm, are a problem for the filter-feeding baleen whales. They accumulate in the whales’ stomachs and can be detrimental to the animals’ health.

Microplastics are found in several cleaning and cosmetic products and also occur after larger plastics break down.

Climate change is a threat to marine mammals and is expected to cause a decrease in available food resources, as well as a loss of icy habitats.

Climate change and pollution are also causing an increase in ocean acidification. An increase in acidity causes calcium carbonate, a substance found in the shells and skeletons of several small marine organisms, including corals, plankton, and bivalves, to dissolve. This will mostly affect the baleen whales, which rely on small marine animals for food.

Whales have been traditionally hunted by several indigenous groups. They were not only hunted for food but also for their blubber, whale oil, and baleen. Whale blubber was used by several cultures for lamp fuel and the baleen was used to make fishing lines and cups.

As technology advanced, the demand for whale meat increased. At the beginning of the 20th century, the ability to freeze meat at sea meant that greater numbers of whales were caught for human consumption and their use in specialty products.

The International Whaling Commission (IWC) was founded in 1946 with the aim of conserving whales by moderating whaling activities. In 1982 the commission issued the Commercial Whaling Moratorium, which called a halt to commercial whaling.

According to the World Wildlife Fund, 31,984 whales have been deliberately killed as a result of whaling activities since the IWC’s moratorium began in 1986.

Some indigenous communities are granted special whale-hunting rights, because hunting whales is considered to be a vital part of their culture.

Whales are also captured or bred in captivity for human entertainment and education.

Orcas have been kept in captivity since 1961. Other notable species that are kept at zoos and aquariums are beluga whales, pilot whales, and bottlenose dolphins.

It is estimated that 2,000 to 3,000 whales and dolphins are currently held in captivity around the world.

Conservation groups have expressed concern that the relatively small size of the enclosures used has an adverse effect on the mental health of these large, intelligent animals. Several humans have lost their lives in incidents involving captive Orcas in zoo parks.

In recent years, a growing number of governments are placing bans on keeping whales in captivity.

Several groups are working to rehabilitate and release captive whales. Where this is not possible, the groups advocate the use of sea pens, which would allow the whales to experience their natural environment in safety.

You can find out more about whales and related animals on the following pages: