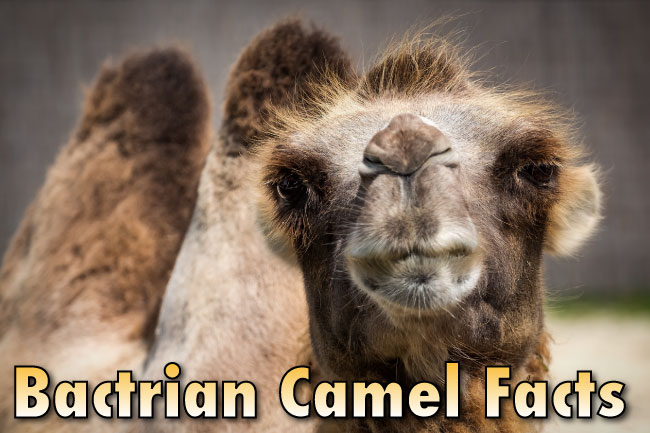 This page contains Bactrian Camel facts for kids and students. This page is part of our Online Zoo, which features animal information, pictures and videos. Visit today!

Bactrian Camel Facts At A Glance

Watch the video below to see Bactrian camels in a zoo:

Bactrian camels have been used by man both as a means of transport and for food for many thousands of years.

Until recently it was thought that there was only one species of Bactrian camel, and that wild Bactrians were related to escaped domestic animals. However, scientists now believe that the two species diverged (became separate) before camels were domesticated.

Wild Bactrian camels are slightly smaller and thinner than domesticated Bactrians, and are able to drink water with a very high salt content.

Wild Bactrian camels are critically endangered. They are found in the Gobi and Taklamakan Deserts of Mongolia and China.

Both Bactrian camel species belong to the genus Camelus. (A genus is a group of closely related animals.)

The third member of this group is the dromedary, which has only one hump. The word ‘camel’ is used to describe any of the three species of the genus Camelus.

Camelids are themselves members of a larger group of hoofed animals known as even-toed ungulates, or Artiodactyla.

What does ‘Bactrian’ mean?

The word ‘Bactrian’ refers to the historical area of Bactria. Today the area comprises Afghanistan, Uzbekistan and Tajikistan.

Bactrian camels have thick, shaggy coats that are various shades of brown. The coat has two layers, and provides insulation both from the cold nights and the intense daytime heat of the desert.

Bactrian camels’ legs are long and thin. When they walk, Bactrian camels move both the front and back legs on the same side of the body at the same time. This is known as ‘pacing’.

The necks of Bactrian camels curve upwards and their upper lips are split in two. Their mouths and lips are tough, allowing them to eat hard and thorny desert plants.

Bactrian camels have a number of adaptations that allow them to live in extreme desert conditions.

Their long eyelashes and sealable nostrils provide protection from the sand that is whipped up during a sandstorm. Bactrian camels also have transparent third eyelids that are used to clear the eyes of sand.

The feet of Bactrian camels are wide and tough, enabling them to walk over sand without sinking.

Bactrian camels are famous for their ability to survive for long periods of time without drinking. However, it is a common myth that water is stored in a camel’s humps.

In fact, the humps store energy, in the form of fat, rather than water. If this fat was evenly spread around the body it would cause the camel to overheat.

Camels sweat very little. When they breathe, water in their breath is captured in their nostrils and reabsorbed. A camel’s waste products also contain very little water.

Bactrian and dromedary camels both have oval, rather than round, blood cells. It is thought that this enables the cells to travel in blood that is thick and lacking in water.

Camels can lose 25% of their body weight in water. An amount far smaller than that would be fatal for humans.

Camels are also able to drink large amounts of water very quickly, and have been recorded taking in 27 gallons (102 liters) in under 10 minutes. A Bactrian that looks thin and undernourished will quickly swell up to its normal size after drinking.

Bactrian camels are mainly herbivorous, although they will feed on carrion if no other food is available. Their mouthparts and digestive systems are able to cope with a wide range of vegetation.

Bactrian camels are one of the few animals that can eat snow efficiently in order to obtain water.

Just like cows, camels regurgitate food and chew it again in order to obtain its full nutritional value. The regurgitated, semi-digested food is known as ‘cud’.

Bactrian camels are diurnal (active during the day). They live in migratory. Smaller herds of 6 to 30 animals congregate at water holes to form larger herds of up to 100 animals.

The herds are led by a single male camel. During the breeding season, males fight for access to groups of females, known as ‘harems’.

Gestation (the length of time a pregnant female carries a baby) lasts 13 months. Newborn Bactrian camels are large, and able to walk soon after being born. They are fed by their mother for around 18 months, and stay with her for several years after this.

Watch the video below to see a newborn Bactrian Camel in Mongolia:

Bactrian camels can live up to 50 years.

Is The Bactrian Camel Endangered?