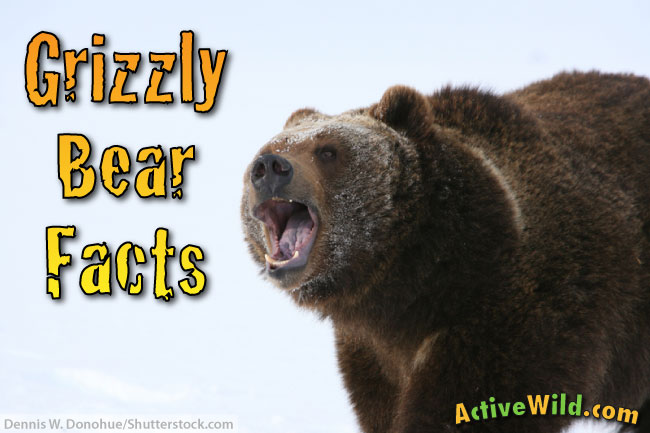 This page contains amazing grizzly bear facts for kids and students. This page is part of the Active Wild Online Zoo, which features animal information, pictures and videos. Visit today!

Grizzly Bear Facts At A Glance

The grizzly bear is a North American subspecies of brown bear. It is an apex predator, famed for its strength and hunting ability, as well as for its bad temper. The grizzly bear’s scientific name, Ursus arctos horribilis, means terrifying brown bear!

Grizzly bears are solitary animals, only congregating when an abundant food source is available (such as the annual salmon migration, during which large numbers of fish make their way upriver to spawn).

Grizzly bears rarely climb trees, but are good swimmers. Don’t try to outrun a grizzly: they can reach speeds of up to 35 mph (56.3 km/h) in short bursts!

The grizzly bear is a large bear with a big head, long snout and short, rounded ears. Its face can appear slightly concave (curved inwards).

The grizzly bear has a large hump on its back above its shoulders – a feature only found in brown bears. It is made entirely of muscle for digging.

The grizzly bear’s fur is dark brown near the skin and paler towards the ends. Fur color varies between individuals. Some grizzly bears are a pale golden color, others are a much darker brown.

The grizzly bear can be told apart from the black bear by the grizzly’s larger size, brown color and shoulder hump.

On average, the largest bear is the polar bear. However, some individual Kodiak bears may be larger or of a similar size to the largest polar bears.

Grizzly bears vary greatly in both size and appearance throughout their range. Although the very biggest males can reach up to 1,700 lb. (771 kg), most are significantly smaller. Most males weigh between 400 and 790 lb. (180 and 360 kg).

Grizzly bears that live near the coast tend to be larger than those found inland. Bears living by the coast can feast on salmon as the fish make their way upstream to spawn.

Most grizzly bears are found in western Canada and Alaska. Grizzly bears are also found in several northwestern United States, including Idaho, Montana, Washington, and Wyoming. They are present in Yellowstone, Glacier and Grand Teton National Parks.

The grizzly bear is found in a variety of habitats, including forests, rocky hillsides, coastlines, meadows and forests.

A grizzly bear’s claws are long and curved. They are around 10 cm (4 in) in length, and very strong. Unlike those of the black bear, they are not sharp, and are built for digging rather than climbing trees (grizzly bears are rarely found in trees). The grizzly’s claws are also useful for catching fish. 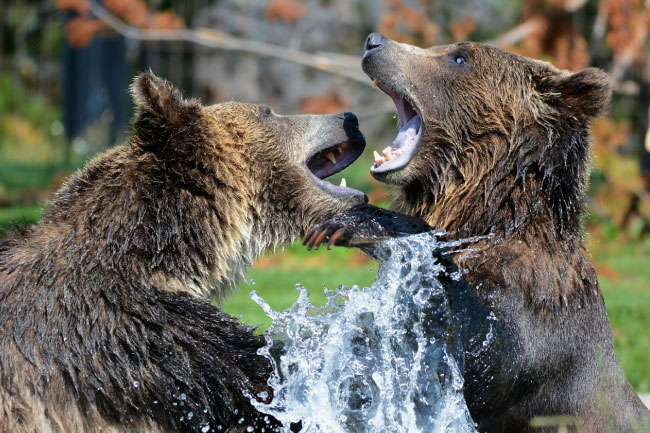 What Do Grizzly Bears Eat?

Grizzly bears hunt a variety of animals, including moose, other deer species, bighorn sheep and cattle. They will also eat carrion (dead animals) and scavenge kills made by other animals.

Salmon forms an important part of the diet of many grizzly bear. Grizzly bears congregate near (and in) rivers during the salmon spawning season.

Grizzly bears living by the coast will also dig for shellfish.

Grizzly bears hibernate for between 5 and 7 months during the coldest period of the year. In the months before hibernation, the bears eat as much as they can. This is in order to build up reserves of fat that they can live off during the winter.

At the onset of winter, grizzly bears dig holes called dens. The bears hibernate in these dens and emerge in spring.

While hibernating, the grizzly bear’s metabolism (the rate at which energy is used by their bodies) slows down. Its heart will only beat 9 times per minute and its body temperature will drop slightly. The bear won’t even go to the bathroom during this time!

Mating takes place during May and July. During this time males will fight each other for access to females. In a process known as ‘delayed implementation’, pregnancy is delayed until winter, when the female is hibernating.

The female wakes before giving birth. She usually gives birth to two cubs, but there can be as few as one or as many as four cubs per litter. The cubs are nursed in the den until spring.

Grizzly cubs stay with their mother for 2 years. Male bears pay no part in rearing their cubs.

Grizzly bears are among the slowest animals to reproduce. They don’t begin to reproduce until around five years old. After having cubs, females may not raise another litter for three or more years.

Although their ranges to overlap, the two species have evolved to inhabit different niches. Each would find it hard to live in the other’s habitat. However, hybrids (animals that are part grizzly bear, part polar bear) are occasionally encountered.