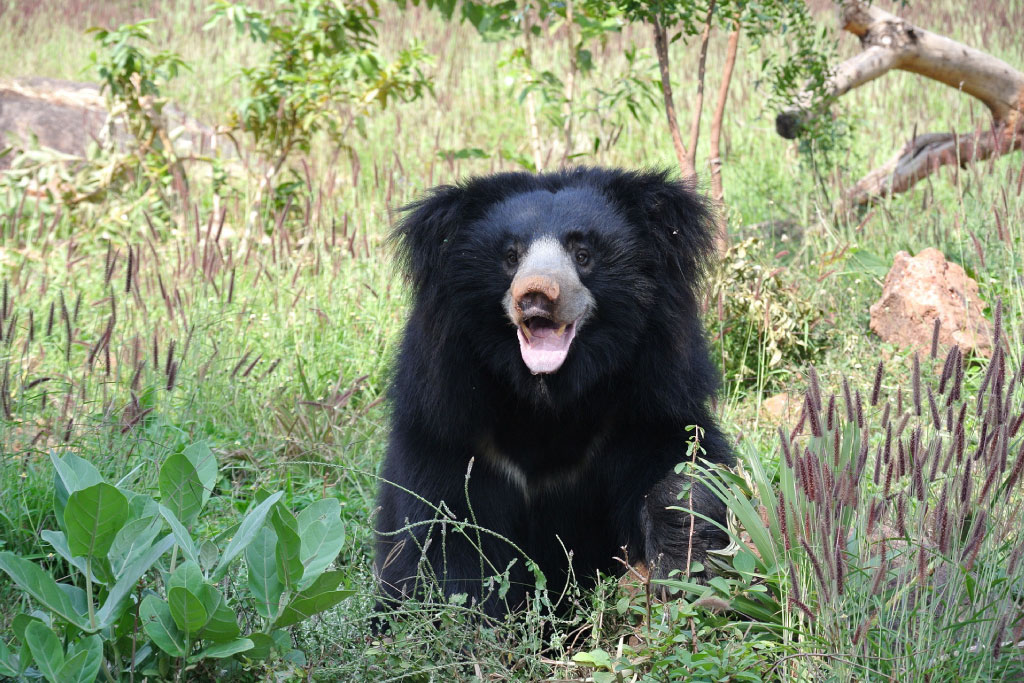 The sloth bear is an insectivorous (insect-eating) species of bear found in the Indian subcontinent. Although not the largest of bears, it is armed with fearsome claws … and a bad temper. Even its main predator, the tiger, may be forced to retreat if its initial surprise attack is unsuccessful.

Sloth Bear Facts At A Glance

Watch the video below to see a Sloth Bear in the wild:

How To Recognize A Sloth Bear

The sloth bear is a medium-sized bear, slightly smaller than the American black bear and Asian black bear. It has long, shaggy fur, which is usually black but which can be dark brown in color. The hair is particularly long on the back of the head and neck, forming a mane. The muzzle is pale and long. The ears are hairy, and less stiff than those of other bears.

On the sloth bear’s chest is a cream-colored, ‘u’ or ‘v’ shaped marking. The mark is variable in size and shape and is not present on all individuals.

Asian black bears and sun bears have similar markings. The feature may serve as a threat display; all three species live in areas also occupied by tigers.

The sloth bear has extremely large paws. These are equipped with long, curved claws which are white in color. The claws, like those of all bears, are ‘non-retractable’ (i.e. they cannot be pulled back into the paw like those of a cat).

The claws of the sloth bear are designed more for breaking into termite mounds than for climbing. However, the species is a capable climber, and will climb trees in order to forage and to rest.

Male sloth bears are up to 40% larger than females.

Why Is The Species Called ‘Sloth Bear’?

The sloth bear was first described (i.e. named and recorded as a new species) by English naturalist George Shaw in 1791. He named it Bradypus ursinus (sloth bear), believing it to be related to sloths (who, like the sloth bear, lack the middle pair of incisor teeth).

We now know that the sloth bear is member of the bear family Ursidae, in the order Carnivora. (Sloths are in the order Pilosa.)

There are two subspecies (types) of sloth bear:

A Carnivoran That Eats Insects

The sloth bear, like all bears, is a carnivoran – a member of the order Carnivora. The ancestors of all carnivorans were meat-eating mammals. Like most bears, however, the sloth bear has evolved to become an omnivore (an animal that eats both plants and meat).

Adaptations For An Insectivorous Lifestyle

The sloth bear has a number of adaptations for an insectivorous diet. The claws are strong and sickle-shaped for breaking into termite mounds. The tongue is extremely long for gathering up insects. The lower lip is long and mobile (another name for the sloth bear is labiated bear, which means ‘lipped bear’).

The sloth bear lacks the central pair of upper incisors. This allows it to suck insects into its mouth. The nostrils can be closed at will, thereby aiding the sucking process and also protecting the bear from insect bites and stings. The sloth bear’s coat may provide protection from its insect prey.

The bear uses its excellent sense of smell to locate insects, and can even sniff out insects buried in the ground.

Where Does The Sloth Bear Live?

The sloth bear is found in India, Bangladesh, Sri Lanka, southern Nepal and possibly Bhutan. Most sloth bears live in India. Here, due to habitat loss, the population has become fragmented and is now split between five main regions.

The sloth bear is extinct in Bangladesh.

You can see where the sloth bear is found on the map below:

The sloth bear is found in a variety of habitats, including tropical forest, savannah, scrubland, and grassland. Although the species tends to avoid areas inhabited by humans, it will occasionally stray onto plantations to eat crops.

The sloth bear is typically found in lowland habitats. Apart from a population found in the Western Ghats (a mountain range in the south west of India), the species rarely inhabits areas above 1500 m.

The sloth bear is most active at dusk and at dawn and is the most nocturnal of all bears. When living in the vicinity of humans, the sloth bear is more likely to have a nocturnal lifestyle. Females with cubs are more active during the day than usual.

The sloth bear is solitary, usually living and foraging alone. It marks its territory by rubbing against trees and making scratch marks in tree trunks.

The sloth bear communicates using a wide range of vocal sounds. These include various grunts, barks, snorts, shrieks and whines. The bear is a noisy eater, huffing, puffing and slurping as it roots around for insects.

Does The Sloth Bear Hibernate?

Unlike other bears, the sloth bear does not retreat to a den and sleep during the winter.

The sloth bear is primarily an insectivore (an animal whose diet comprises insects). Its main prey is termites. The bear will also hunt ants, beetles and various grubs.

In addition to insects, the sloth bear will also eat fruits such as mangoes and figs, and flowers. When other food is scarce it will eat carrion.

The sloth bear mates from May to July. Courting bears are even more vocal than usual, producing a variety of loud calls.

The females gives birth in December and January. (Sri Lankan sloth bears may mate and give birth at any time of the year.) The birth takes place in a sheltered area that the female has prepared previously, such as a cave or an underground den.

The litter consists of one, two, or rarely three cubs. The newborn cubs are blind and weigh around 1lb (.5 kg). Their eyes open at 2 to 3 weeks, and they begin to walk at around 4 weeks.

The female often carries her cubs around on her back, and will continue to do so until they are around 9 months old. She will shepherd them up a tree if threatened by a predator.

The cubs become independent at 18 to 30 months. The sloth bear reaches sexual maturity at around 3 years of age. Only around 53% of males and 38% of females survive to adulthood.

The sloth bear is an aggressive and well-armed animal. Its main predator is the tiger, although it may also be targeted by leopards and dholes (a species of wild dog).

Even a full-grown tiger may be forced to retreat from an angry sloth bear if its initial surprise attack is unsuccessful.

The sloth bear’s thick fur, powerful claws and aggressive nature make it dangerous not only for potential predators, but also for humans. As human development continues to encroach upon the bear’s natural habitat, attacks occur more frequently.

Many people consider the sloth bear to be more dangerous than the tiger, as it attacks without reason or hesitation.

Is The Sloth Bear Endangered?

The sloth bear is no longer found in much of its original range. Today its population is fragmented and decreasing. The species’ conservation status is ‘Vulnerable’.

The main threat to the sloth bear is habitat loss. As the human population continues to grow in the region, increasing pressure is put on the sloth bear’s natural habitat.

Areas in which the bear was previously found have been cleared to make way for plantations, mines, quarries, roads and towns. With bears and humans living in ever closer proximity, attacks are more likely. The bears are often persecuted as a result of attacks.