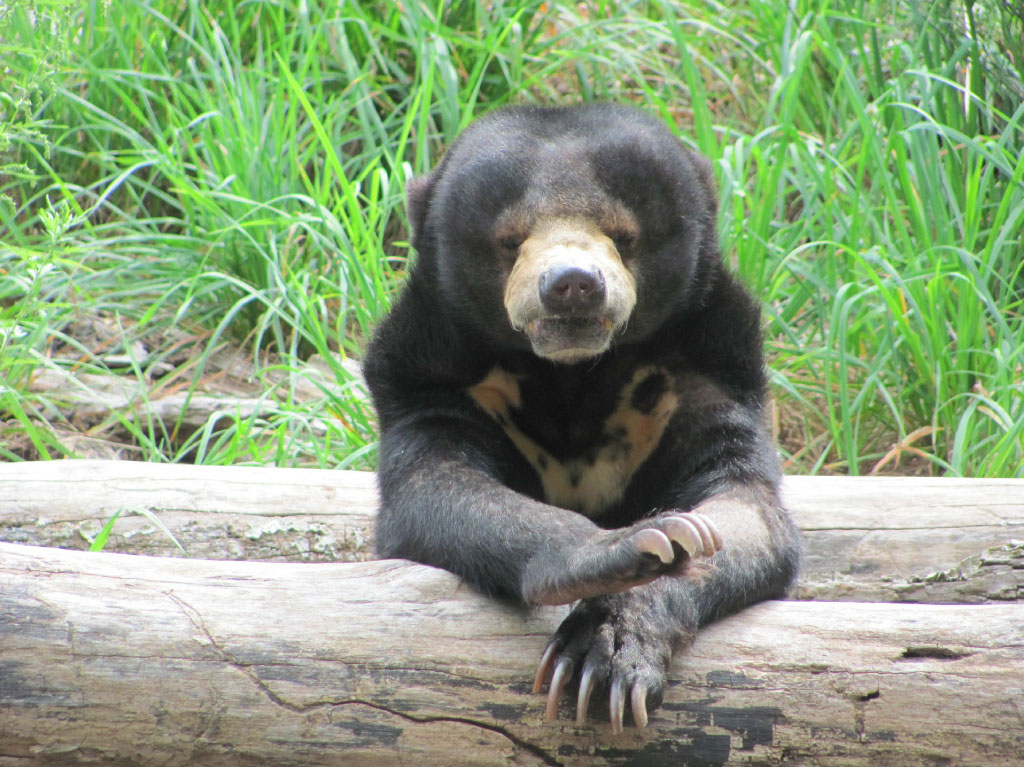 The sun bear is the world’s smallest bear species. It is found in the tropical forests of Southeast Asia. The sun bear’s conservation status is ‘Vulnerable’ and it is threatened both by habitat loss and by hunting.

Find out more about this species …

Sun Bear Facts At A Glance

You can see sun bears in the wild in the video below:

The sun bear is the smallest of the bear species, reaching only around half the size of the American black bear (Ursus americanus). This elusive bear gets its English name from the distinct mark on its chest which, according to folk stories, represents the rising sun.

There are two subspecies (types) of sun bear:

Despite its small size, the sun bear has a typically bear-like stocky, muscular build. Its fur is short and usually jet-black, although dark brown, reddish and gray individuals also occur.

The sun bear’s chest patch is typically crescent-shaped, but can also be circular or irregularly-shaped. The color ranges from cream to orange.

The sun bear’s head is large compared to the rest of its body. The muzzle is short and pale oragne in colour. The upper lip is hairless.  The teeth are large and the species has an extremely powerful bite.

An excellent climber, the sun bear has several adaptations for this purpose. These include strong front legs, front paws that turn inwards, hairless soles, and long, curved claws. The claws on the front paws are particularly long and powerful.

The range of the sun bear (i.e. the area in which the species is found) covers most of Southeast Asia.

The species occurs on the mainland (including Thailand, Peninsular Malaysia, Laos and Cambodia) as well as on the islands of Borneo and Sumatra. A few isolated populations are found in eastern India and southern China.

The species’ distribution is patchy, and it has disappeared from many areas in which it was formerly found.

The sun bear inhabits a variety of tropical forest habitats. Its primary habitat is tropical evergreen forest. The species may also be found in mangrove forests and even in agricultural land and plantations if situated close to the bear’s favored forest habitat.

The sun bear is mainly active during the day. It spends most of its time foraging and resting. Brief bouts of activity also occur during the night.

The sun bear is usually solitary unless it is in a mated pair or a mother caring for her cubs.

Much of the sun bear’s time is spent high in the trees, where it will also sleep. On the ground it shelters in tree hollows and among vegetation.

The sun bear may mate and give birth any time of year. Behavior such as mock fighting, head bobbing and hugging have been observed between individuals prior to mating. Some studies suggest that the species may be monogamous (i.e. it mates for life).

The bear’s gestation period is highly variable, ranging between 3 and 8 months. The female usually gives birth to a single cub (on rare occasions to two cubs). The birth takes place in a hollow tree or a den. The new-born cub weighs from 280 to 325 g (9.9 to 11.5 oz.) and is born naked, blind and helpless.

The cub remains in the den for around 3 months. After this time it will start playing outside the nest and accompanying its mother on foraging trips. The cub stays with its mother until fully grown at around 2 years of age.

What Do Sun Bears Eat?

Although a member of the mammalian order Carnivora, the sun bear is an omnivore. Its diet includes invertebrates (such as termites, ants, beetles, stingless bee larvae and earthworms), small vertebrates (such as birds and reptiles), eggs, fruit (especially figs), berries, nuts, shoots and flowers.

One of the sun bears favourite foods is honey. An alternative name for the species is ‘the honey bear’.

The sun bear’s powerful jaw muscles and large canines enable it to bite through the tough bark of hardwood trees in order to reach insect nests. It uses its long tongue to extract honey and insects from narrow crevices. The sharp claws are used to rip open termite mounds and rotting logs.

Food is generally available throughout the year across the sun bear’s range. As a result, unlike other bear species, the sun bear does not hibernate. 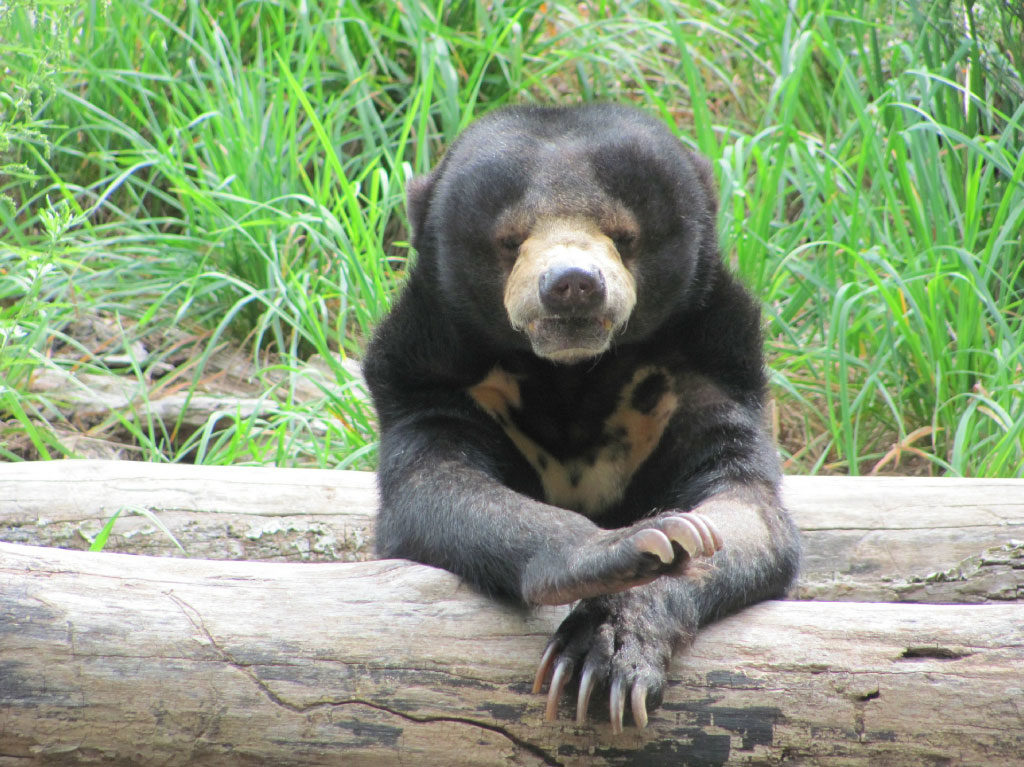 Full-grown sun bears are safe from most predators due to their relatively large size and tree-dwelling life style. The species’ main predators are tigers and other large cats.

The looseness of the sun bear’s skin allows it to turn and face a predator if being held in its jaws.

Infant sun bears are more vulnerable to predation. They may be preyed upon by large snakes and birds of prey.

Is The Sun Bear Endangered?

The sun bear is rated ‘Vulnerable’ by the IUCN.

The global population of sun bears is believed to have shrunk considerably, and continues to decline. According to estimates, there may be fewer than 1,000 individuals left in the wild.

The main factors that threaten sun bears include: