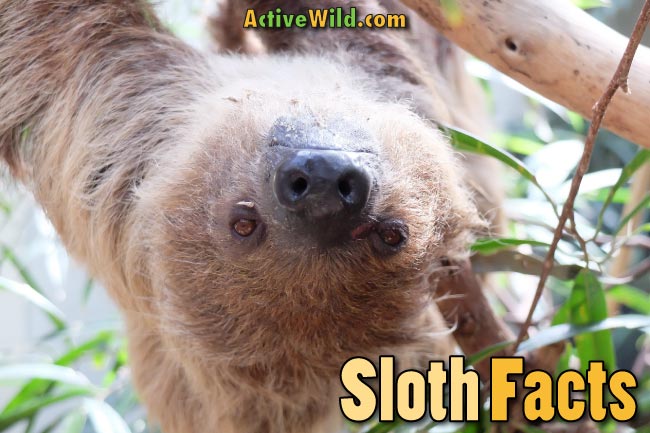 Sloths are tree-dwelling mammals that live in the rainforests of South and Central America. In this article, which is part of our Rainforest Animals series, we’ll look at the sloth’s life and habitat, and learn where it fits within the rainforest ecosystem. At the end is a list of sloth facts for kids.

Watch the videos further down the page to see sloths in the wild!

Sloths are arboreal (tree-dwelling) mammals that live in the rainforests of South and Central America. They are named after the deadly sin of sloth (which means laziness) because they move extremely slowly.

Sloths move so slowly that algae (plant-like organisms) grow in their fur! This is actually beneficial to sloths, as it gives them a slightly greenish color, helping them to blend in with their surroundings!

Sloths spend most of their lives in the trees, where they hang upside-down from branches and vines. Sloths eat, sleep, mate and even give birth while hanging around in the trees!

Due to the design of their feet and long, curved claws, sloths can hang upside down with little or no effort. This actually makes them a less appealing target for human hunters because even when shot, sloths remain hanging in the trees.

Sloths are mostly nocturnal, and sleep during the day.

Perhaps they should have been named two and three fingered sloths; both families of sloths have three toes on their hind legs!

There are two species of two-toed sloth:

There are four living species of three-toed sloth:

Watch this video to see a sloth in its natural habitat:

Sloths have fairly small, thin bodies with short tails. Their heads are small and round, with short snouts, small ears, and large eyes surrounded by dark masks. The shape of their mouths gives them a permanent smiling expression!

Sloths have long, curved claws. These can grow to be up to 3 – 4 inches (8 – 10 cm) long. Sloths use their claws to climb trees and to hook themselves onto branches.

The long limbs and claws of a sloth are designed for hanging and climbing, not for walking on the ground. Sloths have great difficulty getting around when on the floor, as this video shows …

The sloth’s long, shaggy hair is home to algae, small plants and bugs such as moths and beetles. This is due to a combination of the sloth’s slow speed and the warm, damp climate of the rainforest.

Sometimes the sloth will even lick algae and plants off of its fur as a snack!

What Do Sloths Eat?

Sloths are folivores (specialist leaf-eaters), and also eat buds and shoots. Their bodies and lifestyles reflect their diet. Leaves contain very little energy and are also low in nutrients. As a result, sloths have large and complex stomachs, which contain bacteria that break down the leaves.

It can take a sloth a month to completely digest a meal! Sloths climb down from the trees in order to urinate and defecate (poop!) only about once a week. The contents of a sloth’s stomach account for as much as two-thirds of its body weight.

Because leaves contain very little energy, sloths have a low metabolism (the rate at which energy is used by an organism).

Two-toed sloths have been observed eating insects, lizards and birds in addition to plant matter.

As a (not very scientific) comparison, walking at your normal speed you’d probably be moving at about 275 feet (84 meters) per minute. That’s close to the length of a standard soccer / football pitch.

So even when walking you’re about 39 times faster than a sloth!

Sloths spend most of their time either eating or sleeping. In the wild, sloths sleep between 9 and 15 hours a day.

They may not be very good on the ground, but sloths are good swimmers. They use a lazy, doggy-paddle stroke to propel themselves through the water.

Watch the amazing video below to see a sloth swimming:

Due to their low metabolism, sloths have the lowest body temperature of any mammal, and can’t shiver to keep warm.

It’s much easier for a predator to spot prey that is moving. Because sloths spend so much time either motionless or moving very slowly, they often avoid detection.

Sloths are very vulnerable when on the ground and tend to spend as little time as possible out of the safety of the trees.

When cornered or feeling threatened, sloths will lash out with their long front claws.

We hope that you’ve enjoyed these sloth facts.