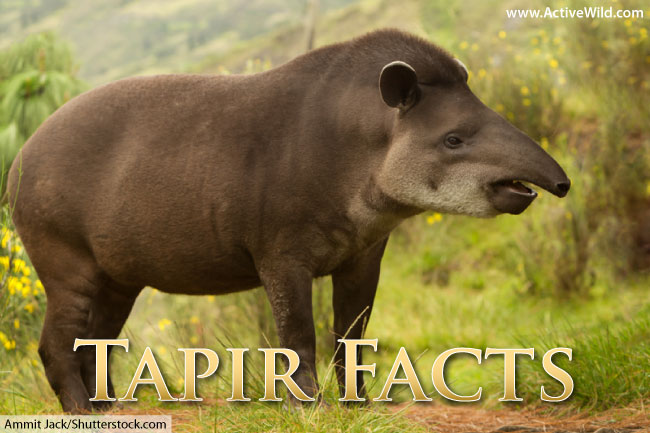 This page contains tapir facts, pictures and information. It is part of our rainforest animals series.

A tapir is a large mammal with a barrel-shaped body and large head. Its most distinctive feature is its long nose, which is like a mini trunk. The nose is flexible, and prehensile (able to grip). Tapirs have hooved toes, short tails, and large, white-tipped ears.

There are five species of tapir. Four are found in South and Central America. The fifth (the Malayan tapir) is found in Asia.

The Baird’s, or Central American, tapir has a dark red-brown coat. It lives in the rainforests of Mexico, and is also found in other Central American countries such as Costa Rica, Ecuador and Belize.

It is the largest land mammal in Central America.

The lowland tapir has a dark brown coat and a short mane running down its back. It is found in the Amazon Rainforest and in other South American regions. It is the largest mammal in the Amazon region.

The mountain, or wooly, tapir lives in mountainous regions of Colombia, Ecuador, and Peru. It is the only species of tapir that doesn’t live in rainforests.

The mountain tapir is the second smallest species of tapir. It has a long, dense coat to keep it warm in the cold mountain forests. It is also recognizable by its white lips.

The Kabomani tapir has only recently been recognised as a separate species. It is the smallest tapir and lives in the forests of the southwest Amazon region.

The kabomani tapir is a darker color than the lowland tapir, which is found in the same region. Kabomani means ‘tapir’ in the local language.

The Malayan tapir has distinctive black and white markings. Its front half is black and its back half is white. This helps the animal to blend into the sunlight and shadows of the forest: a useful adaptation when there are tigers around!

It is the only tapir to be found in Asia. The Malayan tapir lives in Thailand, Malaysia and Indonesia.

How Big Are Tapirs?

The tapir’s most prominent feature is its mini-trunk. The tapir uses this small, gripping trunk like an extra hand: locating and bringing food to the animal’s mouth. A tapir also uses its nose to root around the rainforest floor when looking for food.

The trunk is a combination of the tapir’s nose and upper lip.

Watch the video below to see how a tapir uses its trunk to search for food. You’ll also hear what a tapir sounds like!

Tapirs are members of the Tapiridae family. All five species of tapir are in the genus Tapirus.

Tapirs are in the order Perissodactyla, otherwise known as the ‘odd-toed ungulates‘. The tapir’s closest relations are other members of this order such as horses and rhinoceroses.

Although tapirs have four toes on their front feet, they do have an odd number of toes (three) on their hind feet. They also have the same kind of digestive system as the other animals in the odd-toed ungulate order.

Confused by terms such as order, family and genus? Check out our Animal Classification article, which includes a free downloadable worksheet!

Tapirs usually live near water, and are often found walking or swimming in rivers and lakes. Tapirs are surprisingly nimble and can easily climb up and down slippery river banks.

Tapirs enter the water to bathe, cool down, find food and to evade predators.

The tapir’s flexible snout is useful for more than just gathering food: it can also be used as a snorkel when the animal is in the water.

Tapirs are faster than they look, and with tough skin and a powerful bite, are a match for all but the most determined rainforest predators.

Although they don’t have many natural predators, tapirs can be hunted by caimans, jaguars and anacondas.

When a tapir is frightened it will run straight through the forest or underbrush, using its power and weight to knock aside any branches in its path.

Another tapir defence strategy is to run straight for water. Tapirs can stay underwater for several minutes using their trunks as snorkels.

Tapirs And The Rainforest Ecosystem

Like most of the larger rainforest animals, tapirs live on the forest floor, the lowest of the rainforest layers.

Tapirs play their part in maintaining the rainforest. Tapirs eat leaves, fruit and berries, and deposit the seeds of these plants in their droppings.

This helps the plants to grow in new places. The waste also helps fertilize the plants, so tapirs help new rainforests to grow in more ways than one!

The presence of tapirs is an indication of a healthy rainforest ecosystem. Tapirs are large and slow to reproduce. Because of this, they are among the first animals to disappear if the natural balance of the rainforest is disrupted, for example by trees being cleared or over-hunting by humans.

Adult female tapirs will only have one baby every 2 to 3 years. Pregnancies last just over a year and when the baby tapir (called a calf) is born it can stand and walk almost immediately. This enables the calf to evade predators.

For additional protection, calves are also camouflaged with white spots on their backs.

Mother tapirs are fiercely protective of their calves and will charge and bite animals they see as a potential threat.

The Malayan, Baird’s, and mountain tapir are all rated ‘Endangered’ on the International Union for Conservation of Nature (IUCN) Red List.

The lowland tapir is rated ‘Vulnerable’. (The Kabomani tapir not yet been rated.)

As with most endangered rainforest species, habitat loss due to deforestation is the main factor.

We hope that you have enjoyed learning all about tapirs. We hope you’ll agree that these strange-looking creatures are actually rather awesome! You can learn about other rainforest animals here: List Of Rainforest Animals.