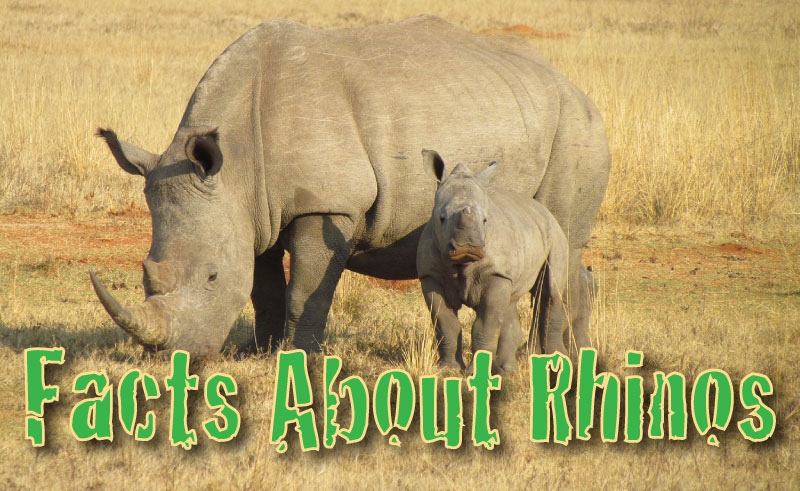 The name ‘rhinoceros’ comes from two old Greek words put together. The word ‘rhino‘ means nose and ‘ceros‘ means horn. So a rhinoceros is really just a nose-horn! This makes sense because the horn is the first thing you notice about a rhino! Want to learn more facts about rhinos? Do you want to know where they live and what they eat? Or perhaps you just want to know the plural of rhinoceros? (it’s rhinoceros or rhinoceroses by the way!) Read on for all this and more…

Some people think that the horn of rhinoceros has healing powers. Because of this, people have hunted rhinos to get their horns and make a special tea to help with fevers and other illness. This means that now rhinos are endangered.

How long have rhinoceros been around?

Rhinos have been on this planet for a really long time. Rhinoceros are related to woolly mammoth – these are huge wool covered animals even bigger than elephants that lived during the ice age a long, long time ago. The species of rhinoceros we know today has been around for 15 million years – that’s a lot more years than us!

Where do rhinoceros live?

White rhinoceros are actually a grey colour but the name comes from the African word ‘wyd’ which means ‘white’. Black rhinoceros get their name from the dark patches on their skin that makes them appear to be black. The black, Javan and Sumatran rhinoceros are the most endangered of all the species.

In all these different countries, rhinoceros live in grasslands and open savannahs. These are like big spaces in the desert. To stay safe, rhinos stick together. They live in groups that are called a ‘herd’ or a ‘crash’. That’s a funny name for a group – maybe they crash into each other a lot when they are playing games!

What do rhinoceros eat?

Where rhinos live, there are lots of types of grass, sometimes over 200 types. This gives rhinoceros a nice variety in their diet. Rhinoceros like anything that is grassy: leaves, roots, bulbs and even bark off the trees.

Rhinoceros use that great big horn of theirs to dig in the ground to get the grass roots and little flower bulbs. Rhinoceros also have a funny shaped top lip. The lip is long and flat so they can use it to get a good sucking grip on grass roots and bulbs, almost like a lawn mower. Even if the desert savannah looks empty and dry, a rhino will be able to find a good meal.

How big are rhinoceros?

The White Rhinoceros is the second largest mammal on the planet – the elephant is the biggest. A male White Rhino can weigh 3,500 kilograms. All of the rhino species weigh over 1,000 kilograms when they are fully grown.

Rhinos may be very big, but they are also very fast. They can run up to 20 kilometres per hour. But they don’t have to run much. Rhinoceros don’t have many predators, so there aren’t many animals that hunt them in the wild. If a brave lion or tiger does try to attack a rhino, the thick horn on the rhino’s nose will easily scare it away!

What do rhinoceros do through the day?

Rhinoceros live in their family groups in their herd. Most of the time they like being alone, so even though they all stand in the same area, they just like to be left alone with their thoughts. Rhinos share the grass plains and watering holes with other herds, but they don’t interact with each other a lot. Rhinos don’t communicate much with other herds. When they do, they normally grunt or growl to tell the other herd to go away from their territory.

Here’s a great video of rhinos just chilling out!

There is a tick bird called an oxpecker that is a good friend to the rhinoceros. This bird sits on the rhino most of the day and eats ticks, or bugs, from the rhino’s skin. This is helpful for the rhino. In return, the rhino keeps the bird safe because tigers, lions and hyenas are too scared to hunt the bird while it is sitting on the back of a great big rhino. The bird also protects the rhino by making really noisy sounds to warn the rhino if anything dangerous is coming.

Rhinos are in trouble and need our help. You can do your bit by getting involved with a charity such as Save The Rhino.