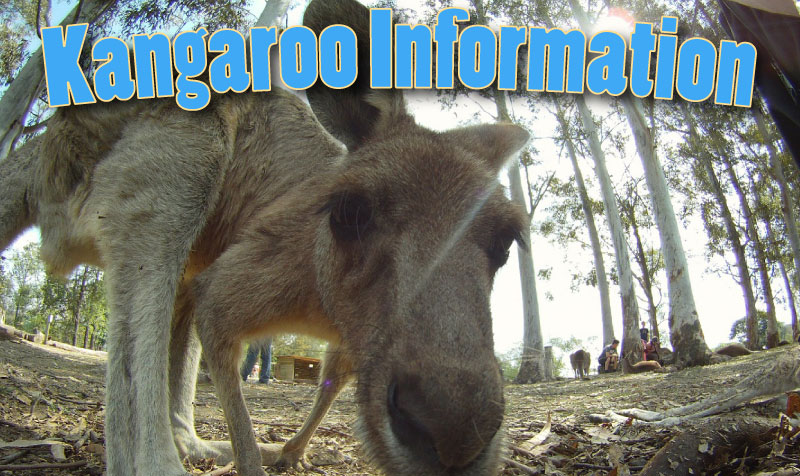 Kangaroos are only found in the wild in Australia. Kangaroos don’t move around by walking. Instead, they move from place to place by jumping, using their strong legs and big feet to propel themselves along.

This page is full of kangaroo information and amazing facts about kangaroos for kids. There’s even a video of boxing kangaroos! Lets learn more about these awesome creatures…

Kangaroos come from a family of animals called macropods, which means ‘large foot’. Their big feet help them with all that leaping around!

Kangaroos are the biggest macropods. Other macropods are wallabies (the smallest) and wallaroos (inbetween wallabies and kangaroos in size).

Western grey kangaroos vary in colour from pale grey to brown and are common throughout southern Australia.

How Big Are Kangaroos?

Kangaroos stand between five and six feet tall from their feet to their long, pointed ears. They weigh between 50 and 120 pounds. Male kangaroos are taller and heavier than female kangaroos.

What Are Baby Kangaroos Called?

Female kangaroos usually only have one joey at a time. Mother kangaroos have special pouches on the fronts of their bodies for carrying their joeys in.

Directly after being born, the tiny joey climbs up its mother’s fur to reach her pouch. At this stage the joey really is tiny; just a few centimetres long. The joey then stays in its mother’s pouch for around 8 months until it is old enough to leap around on its own!

How do kangaroos travel?

Kangaroos are fast movers, usually travelling at around 20-25 miles per hour. However, when necessary, kangaroos can travel at 40 miles per hour! That’s pretty fast!

Kangaroos are brilliant jumpers, and can leap as high as 3 metres. That’s much taller than a fully grown man! They’re good at long jumps too, and have been recorded leaping distances of 7 metres. If three tall men lay down in a line, a kangaroo could jump over all of them.

Kangaroos have long, strong tails that help them to keep their balance.

Where do Kangaroos Live?

Australia typically has a dry and warm climate so it would be difficult for kangaroos to live anywhere else.

Kangaroos live with other kangaroos in groups. Their social groups are called mobs. A mob is made up of males, females and joeys. The largest male kangaroo is the leader of the mob.

Reality! Kangaroo boxing really does take place. Male kangaroos fight to establish which kangaroo is the toughest. The female kangaroos prefer to have babies with the strongest male kangaroo because it means their babies are likely to grow up big and strong too.

You can see kangaroos boxing in the film below.

Kangaroos are big animals and don’t have many natural predators. Dingos (a type of wild dog) are their main threat.

When kangaroos sense danger, they thump their feet loudly on the ground to alert others kangaroos in the mob.

What do Kangaroos Eat?

Kangaroos eat grass, plants, leaves, tree bark and shrubs. All kangaroos are herbivores, meaning that they eat plants, not meat. Kangaroos eat early in the morning or late in the afternoon. Kangaroos chew their food, spit it up, and then re-chew it before it is completely digested. Cows eat the same way.

Kangaroos can go months without drinking. This is useful in a hot country like Australia!

1. When kangaroos hop, they use both legs at once but kangaroos are also able to walk around on all four legs.

3. A kangaroo’s lifespan is about six years

6. A new-born kangaroo is less than an inch long.

8. A female kangaroo’s pouch may contain two babies if they are born a year apart. The mother kangaroo makes two different kinds of milk for the two joeys

9. Kangaroos can move their legs independently only in water, not on land

12. Red kangaroos are the largest marsupials (animals with a pouch).

14. The kangaroo is the unofficial symbol of Australia and they have been featured on some of Australia’s form of currency (money)

• Ask someone to measure how high and how far you can jump and compare it to a kangaroo’s jumps. Take care: you’re not made for jumping the same way that a kangaroo is!

• Draw a male and female kangaroo. Be sure to make the male larger and include the female’s pouch and her joey!

• Kangaroos can leap around 40 miles per hour. Next time you are in a car with someone, ask them to show you how fast 40 miles per hour is. It may not seem that fast in a car, but it’s very fast for a creature without an engine!