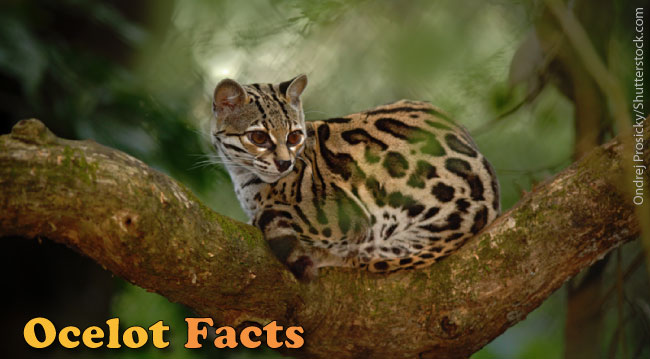 The ocelot is a member of the cat family, Felidae. It looks like a small, slender leopard (and for this reason is also known as the ‘dwarf leopard’). The ocelot is found throughout South America, and its range extends as far north as southern Texas. This article contains ocelot facts for kids, and is part of the Active Wild Rainforest Animals series.

The ocelot is a medium-sized member of the cat family, and is about twice as large as the average housecat. It measures from 20-40 inches long, with a tail length of 15 inches, and weighs between 20-25 lbs.

The ocelot ranges in color from light yellow to reddish-gray, and has dark rosettes, spots, and striped tail rings. The ocelot is named after the Aztec word tlalocelot, meaning field tiger. Of the genus Leopardus, it is also referred to as: the dwarf leopard, leopard cat, or tiger cat.

You can see for yourself just what a beautiful creature the ocelot is in the video below:

The ocelot is found in the rainforests of South America, and can even be found as far north as southern Texas. Although it prefers the lush, dense forest, the ocelot is also able to live in grasslands, mountains, and marshes.

Ocelot Facts: What Does An Ocelot Eat?

The ocelot is both an excellent swimmer and climber, and can use its retractable claws to scale a tree in seconds. The ocelot is nocturnal, its big eyes enabling it to hunt effectively in dim light. Its thin frame allows it to hide in tight places, and it uses its long, ringed tail to balance on land and when in the trees.

You can often find the ocelot up on high tree branches, either sleeping or preying upon spider monkeys, which also make their homes in the upper canopy of the rainforest. It also makes dens (homes) in thick grasses or in hollowed out or fallen trees. Territorial in nature, the ocelot marks its territory with scents and scratches on trees. A solitary creature, like most cats, it only pairs up to mate. Females begin mating at 18 months, males as young as 15 months. To attract the male, the female will give off a scent every four to six months.

Seventy to eighty days after mating, the female will give birth to one or two (occasionally three) cubs. These adorable cubs will their mother’s milk for six months before she teaches them to hunt on their own. After a year, the cubs are able to fend for themselves, but they may live with their mother for up to two years. Ocelots live 7-10 years in the wild, and up to 20 years in captivity.

Because they are so adaptable and agile, ocelots have few predators. However, they must keep an eye out for large birds of prey (like the harpy eagle), jaguars, pumas, and large snakes (like the anaconda).

As with many rainforest animals, the ocelot’s greatest threat comes from humans, who are destroying its habitat with deforestation.

During the 1960’s and 1970’s, the ocelot was hunted for its uniquely patterned fur (or pelt). This caused the ocelot to become endangered.

However, due to laws preventing such hunting, ocelot numbers have recovered. They are now rated as ‘Least Concern’ on the IUCN Red List – although their numbers are once again decreasing.

You can get help save the rainforest by giving to–or working with–rainforest charities, such as the Rainforest Foundation.

Although ocelots can be kept as pets, it is not recommended. They give off a strong scent, spraying on furniture and around homes. Because they are a predatory animal, they have also been known to hurt small children, and kill domestic chickens, birds, and dogs.

10 Facts About the Ocelot

We hope that you have enjoyed reading these ocelot facts. Find out about more rainforest animals here: Rainforest Animals.