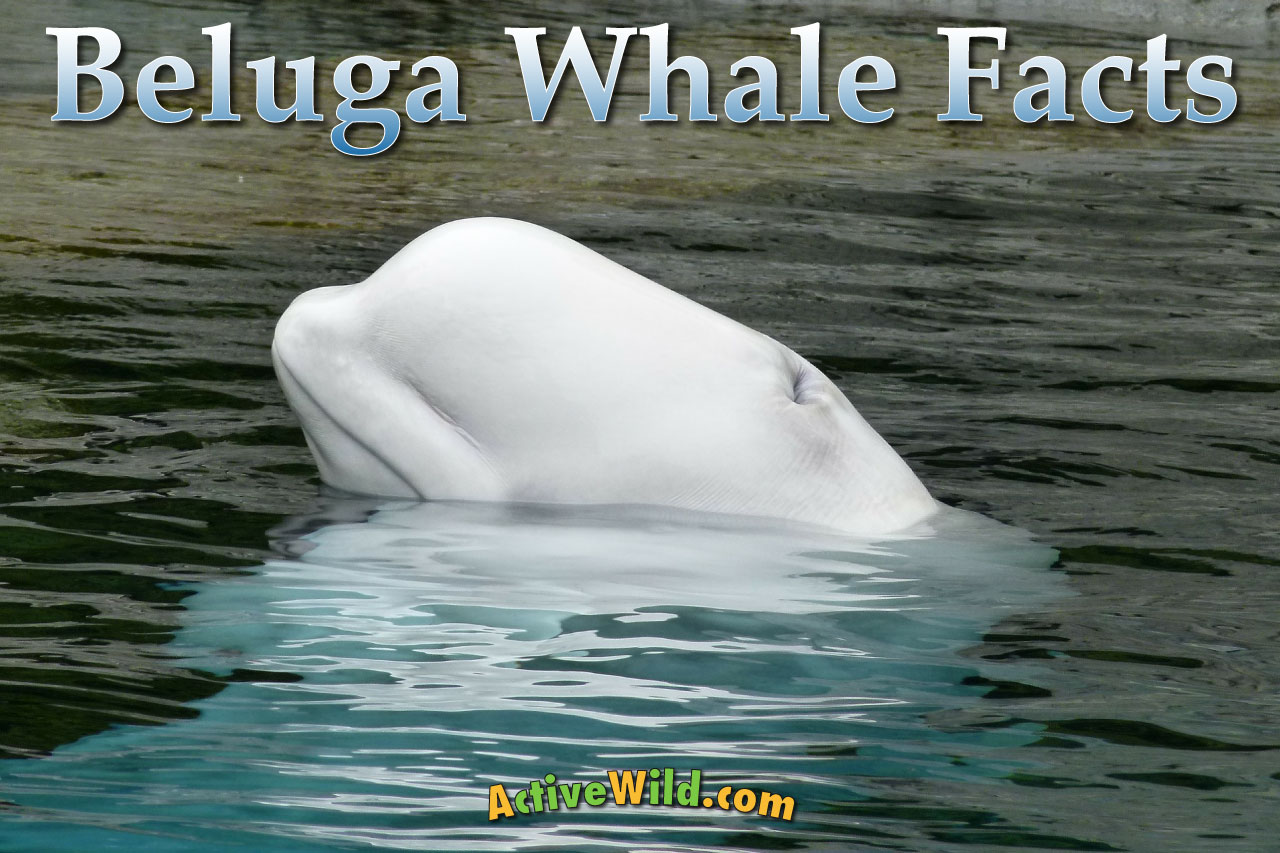 Beluga whale facts, pictures and in-depth information. This page is part of our Arctic Animals series.

The beluga whale is a small whale known for its striking white skin. It is a member of a group of animals known as ‘toothed whales’. This group also contains the killer whale and all dolphins. The beluga whale’s closest living relative is the narwhal.

The beluga whale is found in Arctic and subarctic waters, and has a number of adaptations for living in this cold, inhospitable environment.

Read on to find out more about this amazing Arctic mammal…

Click here or on the image below to download a free printable beluga whale question sheet for use with this page.

Beluga Whale Facts at a Glance

Beluga whales, like all whales, are marine mammals in the order Cetacea. (An order is a large group of related animals.)

Being a mammal, the beluga whale is warm blooded, gives birth to fully-formed young and breathes air with lungs.

Whales are split into two main groups: baleen whales (the Mysticeti), and toothed whales (the Odontoceti).

Beluga whales are toothed whales. Whereas baleen whales such as the blue whale and humpback whale are toothless filter feeders that feed on tiny plankton, toothed whales have teeth for catching fish and squid.

Other toothed whales include the sperm whale, the killer whale (orca) and dolphins.

The beluga whale is a member of the family Monodontidae. The only other member of this family is the narwhal.

The beluga’s most notable characteristic is its color. Born either grey or brown, once it reaches adulthood the beluga has transformed into a striking creamy white. This takes around 7 years for a female, and 9 years for a male.

Another notable characteristic of the beluga whale is the round bump on the animal’s head. This contains an echolocation organ known as the ‘melon’.

Like most whales, the beluga whale can navigate and find food using echolocation. By listening to the echoes of sounds it has emitted, the whale can essentially ‘see’ its surroundings using sound.

How Big Is A Beluga Whale?

The beluga whale is a relatively small whale, being somewhere between the size of a dolphin and one of the larger toothed whales.

Unlike most whales, which shed their skins all year round, belugas only molt their distinctive white skin once a year. They help the process along by rubbing their bodies against rocks and the gravel of the sea bed.

In some Arctic estuaries, hundreds of belugas have been observed doing this at the same time. 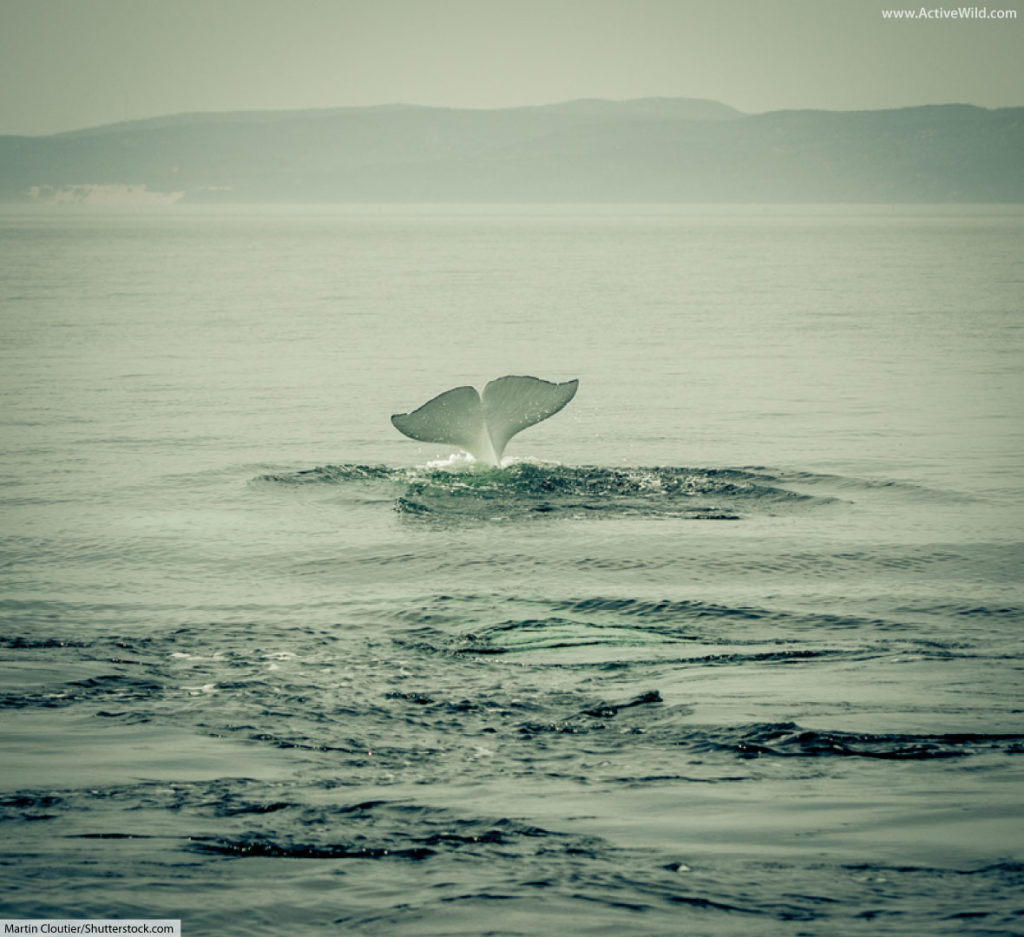 Blubber also provides the beluga with a source of energy during migration; the fat acts as an important food reserve when feeding opportunities are low.

The Beluga Whale lacks a dorsal fin (the fin found on a fish or whale’s back, used for stability when swimming rapidly). Instead, the Beluga has a dorsal ‘ridge’. This aids the beluga to break through ice to maintain vital breathing holes.

The lack of dorsal fin also allows the belugas to take refuge close to the ice itself; killer whales, with their large dorsal fins, are unable to get as close to the surface.

The Beluga Whale’s white color provides camouflage against the ice.

Most cetaceans have neck vertebrae that are fused for greater stability. The Beluga’s vertebrae are not fused. This gives it greater head and neck flexibility, allowing it to look around without moving its whole body.

Belugas are able to swim backwards, helping them to negotiate the difficult ice crevices with ease.

Beluga whales are highly social. They live in groups called pods, which range in size from containing just a few individuals to being several thousand strong. An average pod of beluga whales contains around 10 whales.

Beluga Whales communicate frequently using a variety of high-pitched clicks and whistles. Because of this they are sometimes called the ‘Canaries of the Sea’. The whales are also known for their inquisitiveness, often approaching boats to see what’s going on!

You can see some footage of these amazing animals in the video below.

Unlike other toothed whales such as orcas and dolphins, belugas rarely breach the water’s surface. This is due to their relatively slow speed and body shape. By remaining underwater belugas also make themselves less visible to predators.

As is the case with many large animals, the rate of beluga whale reproduction is slow, with one calf being born to an adult female every 3 years. Gestation lasts between 12 and 15 months. The calves are usually born in deeper water during the winter.

Beluga Whale calves are initially fed on their mother’s milk. This has a very high fat content, ensuring fast growth.

Where Do Beluga Whales Live?

Beluga Whales are found in the Northern Hemisphere, from the west coast of Greenland to Svalbard in Norway. The cold, Arctic coastal waters are their main habitat. Resident populations are also found in the Cook Inlet and in the St Lawrence River system in Canada.

The beluga whale is one of the few cetaceans that is found in both salt and fresh water habitats.

Belugas feed on a variety of prey, including fish, squid, octopuses and crabs. Using the rows of peg-like teeth that line their upper and lower jaws, beluga whales grab and tear their prey rather than chewing it.

The Beluga Whale’s well-defined lips are capable of ‘spitting’ water underwater. This is used to uncover hidden or buried prey.

The beluga is listed as Least Concern by the IUCN. Localized, smaller populations are often under greater threat due to the strong philopatric* nature of the species. The Cook Inlet population, for example, is listed as Critically Endangered.

*Tending to remain or return to the same areas again and again.

Belugas are threatened in several ways:

Beluga Whale To The Rescue!

In 2009 Mila, a captive beluga whale, rescued a free diver who had got into difficulty in her tank. During a free diving task, Yang Yun suffered from severe leg cramps and was unable to swim back to the surface. As she started to sink, Mila took hold of the diver’s legs and guided her all the way to the surface!

Of course, we don’t know the reasons behind behavior such as this. It’s very easy to anthropomorphize (give human characteristics to) animal behavior. But it does make a good story!

We hope that you have enjoyed learning about beluga whales.