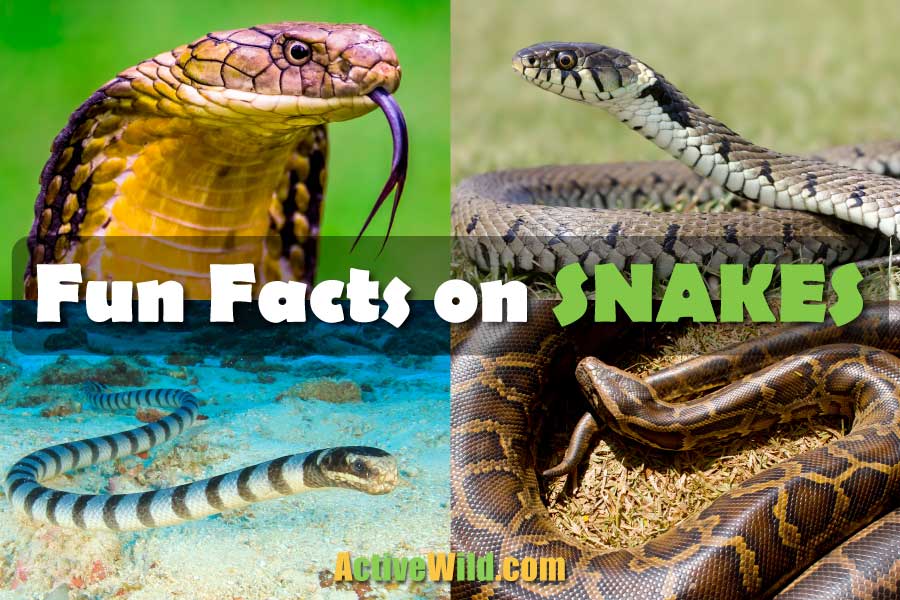 Snakes are reptiles in the suborder Serpentes. There are over 3,000 species of snake, and they are found on every continent except Antarctica.

Snakes live in a variety of different habitats, and differ remarkably in size, coloration and lifestyle. These limbless reptiles are a unique, fascinating group of animals, feared by many but a vital part of ecosystems all around the world.

On this page you’ll find a collection of fun facts on snakes. Read on if you want to find out what a snake is, the differences between different types of snake, how and when snakes evolved, and many other interesting snake facts…

There are some 3,000 species of snakes, accounting for about a third of all the reptile species on the planet. They live on every continent except Antarctica, and in nearly every kind of ecosystem.

For all their diversity, snakes have one thing in common: they’re all predators. Snakes’ bodies are highly adapted for processing animal food and totally unsuited to eating plants.

The largest snake is the green anaconda (Eunectes murinus) of tropical South America. The largest specimen ever found was 28 feet long, about the length of a city bus. Her weight was probably around 500 lb / 227 kg.

A 28-foot snake is an intimidating animal, but even the largest anacondas would be dwarfed by their ancient cousin, Titanoboa. Titanoboa lived in South America around 60 million years ago and reached lengths of over 40 feet. Paleontologists estimate it would have weighed about 2,500 lb / 1,134 kg.

Titanoboa probably evolved its massive size to take advantage of ecological niches that had recently been vacated by dinosaurs and other large reptiles.

There are 18 taxonomic families of snakes, the largest (in terms of number of species) is Colubridae. Colubrid snakes are generally non-venomous and on the small side. Garter snakes, rat snakes, and kingsnakes all belong to this family.

Although most colubrids are non-venomous, they are close cousins of the family Viperidae, which includes some of the most dangerous snakes in the world: rattlesnakes, bushmasters, and other so-called “pit vipers.”

Another major family is the Elapidae, which includes several highly venomous species such as cobras, coral snakes, sea snakes, and mambas.

Colubrids and elapids have different kinds of venom:

Boas, pythons, and anacondas are all non-venomous constrictors. Instead of killing with venom, they coil their heavy bodies around their prey and squeeze, cutting off circulation and breathing.

The constrictors belong to two families: Boidae (which includes both boas and anacondas) and Pythonidae. Genetically, they’re relatively distant from other snakes, and from one another, which leads scientists to believe that they branched off in the early stages of snake evolution.

An irrational fear of snakes is called ophidiophobia. According to one study, it’s the most common of all animal phobias, affecting one in every three American adults.

They might be intimidating, but snakes are mostly harmless. Roughly a fifth of all snake species are venomous, and of those about a third are venomous enough to be a threat to humans. So, overall, 93% of snakes are effectively non-venomous to humans.

Of course, just because a snake is non-venomous doesn’t mean it’s harmless. The large constrictors can be extremely dangerous. Fortunately for us, they are pretty rare, tend to live in remote areas, and are generally shy around humans.

There have been very few confirmed cases of humans dying from an attack by a constrictor. You’re more likely to be killed by a vending machine.

People often come across snakes on hiking trails, where snakes use the open ground to sun themselves in the middle of the day – right at the same time when people are hiking. In the United States, the most dangerous snakes are cottonmouths, rattlesnakes, water moccasins, copperheads, and coral snakes.

The southern U.S., there’s a common saying: “red on yellow, kill a fellow; red on black, friend of Jack.” It refers to the color pattern of the dangerous coral snakes (red-yellow-black-yellow), which look very similar to harmless milk snakes (red-black-yellow-black).

The rhyme works most of the time, but unfortunately it’s misleading: there are some dangerous snakes that do have the red-on-black pattern. So unless you’re a reptile expert your best bet, regardless of the snake’s coloration, is to admire from a safe distance.

The World Health Organization estimates that 5.4 million people are bitten by snakes each year, and roughly half are injected with venom (the other half are so-called “dry bites”). The majority of these cases occur in Asia, where venomous snakes such as cobras are common, and they mostly affect agricultural workers, whose job puts them in close contact with the snakes’ natural habitat.

Snake bites can be extremely painful, but they’re rarely fatal. According to the World Health Organization, fewer than 150,000 people die each year from snake bites.

Over the course of evolution, snakes have been a major threat to humans and other primates. Primatologist Lynne Isbell has written a whole book on how snakes affected the evolution of the primate nervous system. She shows that snake-like stimuli evoke an immediate and surprisingly strong response in many primate species, including humans, even from individuals who have never seen a snake and have no reason to fear them.

The brain processes these stimuli more quickly than normal object-perception, which may account for why so many people are susceptible to ophidiophobia. It may also explain the experience that many people have when they see a snake, where they feel as though they were already jumping back before they consciously registered the snake’s presence.

A lot of people might fear snakes, but millions keep them as pets. Snakes, of course, aren’t mammals, so they don’t provide the same kind of companionship that you might get from a cat or a dog. But they are perfectly safe and can be arrestingly beautiful. There’s nothing quite like holding a ball python or a corn snake, feeling its muscles ripple against your hand as you admire its intricate patterning!

The Evolution of Snakes

Snakes are all cousins, belonging to a distinct branch of the evolutionary tree: the suborder Serpentes.

DNA evidence suggests that snakes arose as a specialized group of lizards. Their closest living cousins are lizards from the Toxicofera group, which includes chameleons and iguanas.

As the name suggests, Toxicofera includes all of the world’s venomous reptiles, including not only snakes but also Gila monsters and Komodo dragons.

Snakes branched off from other reptiles some time around 100 million years ago, right in the middle of the Cretaceous period. When the first snakes appeared, T. rex was still tens of millions of years in the future.

Some snakes, notably pythons and boas, still have tiny back legs. These so-called “spurs” are barely noticeable on the snake’s underside, and are vestigial appendages just like the human tailbone or the hip bones of whales and dolphins.

You might think the snake’s body plan would be an evolutionary oddity: surely having legs is better than not having them, right? Surprisingly, evolution tells us that’s wrong. Many groups of lizards have evolved a similar body plan, and leglessness (or near-leglessness) has evolved no less than 20 separate times in different groups of lizards.

So what’s the advantage of being legless? There are two possibilities: swimming and burrowing. The burrowing hypothesis is supported by the habits of modern snakes. Many snakes are extremely adept hunters of subterranean animals, and their long, flexible bodies help them access small mammals in their burrows.

It’s also possible that the earliest snakes were aquatic. Among modern snakes, the python probably comes closest to the ancestral snake, and pythons typically live in swampy, semi-aquatic environments. So it may be that early snakes lost their limbs to help them swim, in much the same way that dolphins and whales lost their back legs.

When you look from the outside, it’s hard to see how a snake is put together: it looks like a reptilian head and jaw, then nothing but tail all the way to the end. But a snake’s skeleton is unusual, partially because of its sheer length, but also because of where that length comes from. It’s the middle section, the one with the ribs, that appears to have been elongated over evolution.

Humans normally have 12 pairs of ribs, but snakes can have as many as 200 pairs spanning nearly the entire length of the body. There are just a few sections without ribs: a handful of vertebrae at the front (the snake’s neck) and a dozen or more at the back (the snake’s tail).

Scientists in 2009 discovered a network of genes that accelerate backbone growth as the snake develops from an embryo.  If you’ve studied developmental genetics, you won’t be surprised to learn that the genes are part of the Hox system, which is shared by nearly all animals and defines different body zones (e.g. head, thorax, tail) during development.

While most snakes lay eggs (as do the majority of other reptiles), not all do. Sea snakes, vipers, boa constrictors, and anacondas all give birth to live young.

Snakes famously molt, or shed their skin, regularly. This is a common process in most animals: all reptiles shed their scales, and humans constantly shed dead skin cells. The difference is that snakes shed their skin all at once, in a single continuous piece.

Pit vipers, boas, and anacondas have an extra sense: the “pits” on their faces contain heat-sensitive cells that can pick up on the energy of nearby warm objects. The cells are exquisitely sensitive and kept at a constant temperature by the snake’s circulatory system.

We now know that information from the pits is processed in the optic tectum of the snake’s brain, the same region that processes vision. So snakes can literally see temperature.

Find out more about snakes and other reptiles on the following pages on Active Wild:

Ceríaco, Luis M.P. “Human attitudes towards herpetofauna: the influence of folklore and negative values on the conservation of amphibians and reptiles in Portugal.” Journal of ethnobiology and ethnomedicine vol. 8 8. 8 Feb. 2012, doi:10.1186/1746-4269-8-8

Isbell, Lynne A. The fruit, the tree, and the serpent: Why we see so well. Harvard University Press, 2009.