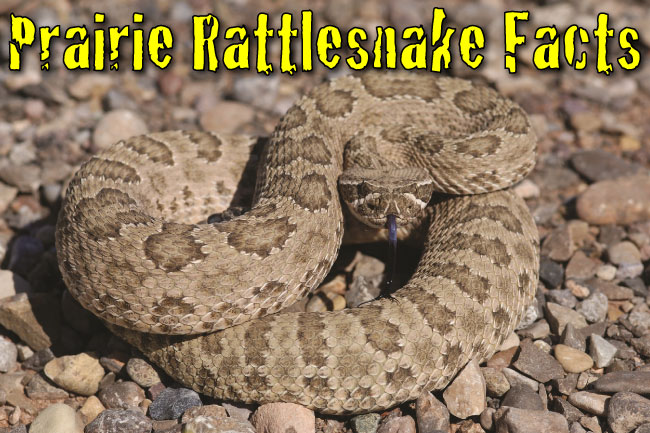 Prairie rattlesnake facts for kids and adults with pictures, video & in-depth information: learn about the United States’ most widespread rattlesnake.

Prairie Rattlesnake Facts At A Glance

The prairie rattlesnake is a venomous snake native to the United States. It is one of the 32 species of rattlesnake that are currently recognized.

Like all rattlesnakes, the prairie rattlesnake belongs to the subfamily Crotalinae, a group of animals also known as pit vipers. Pit vipers have pits, or hollows, located between the nostril and the eye on either side of the head. These are the external openings of highly-sensitive heat-sensing organs which are used to detect prey.

Can you see the pits in the face of the rattlesnake pictured above? They’re the dark holes near the top of the snake’s tongue. (They look a bit like eyes, but the snake’s eyes are further back.)

Rattlesnakes are members of the viper family, Viperidae.

The prairie rattlesnake has a narrow neck and a flat, triangular head. Like all vipers, it has retractable hollow fangs. These are used to inject the snake’s prey with venom.

The color of the prairie rattlesnake’s upper body ranges from light brown to green-gray. Along its back are a series of dark oval patches with narrow white borders. It has dark rings around its tail. The underside of the snake is cream or pale yellow in color.

The scales of the prairie rattlesnake are keeled, with each one having a ridge running along its center.

The video below has some excellent close-up footage of the species. You can also hear the snake’s famous rattle.

At the end of the prairie rattlesnake’s tail are a line of shell-like, hollow scales. These form the snake’s ‘rattle’. When the snake is threatened it vibrates its tail, causing the scales to make a rattling sound. This serves as a warning to potential predators.

Two subspecies of prairie rattlesnake – C. viridis viridis and C. viridis nuntius – are currently recognized. Until recently seven other subspecies were recognized, but these have now been separated into another species, Crotalus oreganus.

This is an example of how animal classification in constantly changing. Even now scientists agree that these closely related species need further study.

Where Is The Prairie Rattlesnake Found?

The prairie rattlesnake is found in the United States, southwestern Canada and northern Mexico.

In Canada the prairie rattlesnake is found in the provinces of Alberta and Saskatchewan, while in Mexico it occurs in northern Coahuila and northwestern Chihuahua.

The prairie rattlesnake typically inhabits open prairies and grasslands. The species may also inhabit a variety of other habitats, ranging from woods and forests to croplands and brush.

The snake can be found living alongside streams, in caves and on rock ledges. It tends to avoid deserts, preferring a moderate vegetation coverage.

The prairie rattlesnake is usually terrestrial (ground-dwelling) but has been known to climb into trees and shrubs.

Being cold-blooded, the prairie rattlesnake’s activity is influenced by the temperature of its environment.

The species hibernates during the winter months, hiding itself away – often in groups – in abandoned burrows, caves and other denning sites.

The prairie rattlesnake may travel from 2 to 4 miles from its den during the summer, but it usually returns to the same den every winter. Several generations may use the same den over the years.

The prairie rattlesnake mates between mid-summer and early fall, with 1 to 25 young being born between August and October. The number of young born depends on environmental conditions, the size of the female and the availability of food.

Unlike most snakes, the species is viviparous: females give birth to live young rather than laying eggs. (In fact, the species is ‘ovoviviparous’; it produces eggs which hatch inside the mother’s body.)

The young are 22 to 28cm (8.7 to 11.0in) long at birth and are born with venom and a prebutton (a single rattle segment). The young rattlesnakes are in danger from predation by various mammals, birds of prey and other snakes. Many of the young perish in their first year.

What Do Prairie Rattlesnakes Eat?

The prairie rattlesnake preys on a wide range of species. It tends to hunt for small mammals such as ground squirrels, mice, rats, young cottontail rabbits and prairie dogs, but will also attack ground-nesting birds, amphibians and reptiles, and occasionally even other snakes.

The snake immobilizes its prey with a quick strike that releases a dose of venom.

The prairie rattlesnake’s eyes are better adapted for sensing movement than for making out clear shapes. The species can detect movement about 12.2m (40ft) away.

The prairie rattlesnake has an extremely acute sense of smell, and can detect scents using both its forked tongue and its external nostrils. It is also sensitive to vibrations in the air and the ground.

Additionally, the prairie rattlesnake is able to locate prey using its heat-sensitive pit organs. These are capable of detecting minute differences in temperature. Because they are located either side of the snake’s head, they give a ‘three-dimensional’ view of the heat sources in the snake’s vicinity.

Is The Prairie Rattlesnake Dangerous?

Though widespread, the prairie rattlesnake is rarely encountered by humans. The species is generally non-aggressive and unlikely to attack humans unprovoked. When approached, it tends either to lie still, relying on its camouflage for protection, or to flee.

A single bite can deliver about 20 to 55% of the snake’s potent venom, which has tissue-destroying and neurotoxic properties.

Is the Prairie Rattlesnake Endangered?

The prairie rattlesnake is rated ‘Least Concern‘ by the IUCN.

The exact size of the entire prairie rattlesnake population is unknown but is believed to number over 100,000 individuals.

The species has no major threats, but some local populations have disappeared as a result of human activity. Historically, rattlesnakes were hunted and killed in their dens. Today, rattlesnake habitat continues to be lost due to human development.

The prairie rattlesnake is an efficient predator, with many adaptations for hunting and dispatching small mammalian prey. Despite this, it rarely attacks humans, and is more likely to flee than attack when approached.

Now you’ve met the prairie rattlesnake, why not find out some more awesome animal facts? Check out these pages: