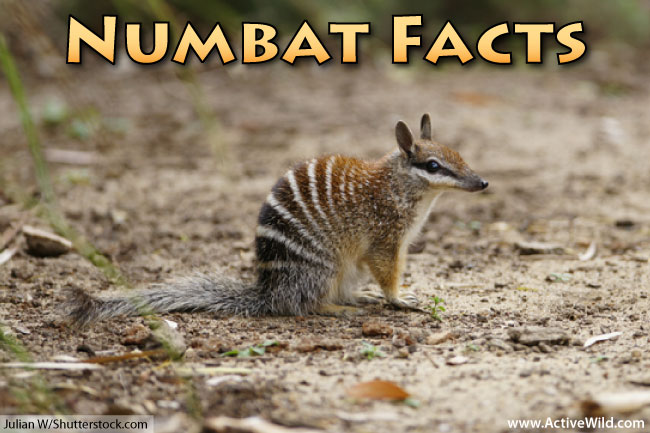 Numbat Facts At A Glance

The numbat is a small, insectivorous (insect-eating) marsupial native to Australia. This distinctive striped mammal is the animal emblem of the state of Western Australia. It’s the only member of the family Myrmecobiidae. Unusually for a marsupial, it is only active during the day.

The numbat has a small and slender body, a pointed, narrow snout and a bushy tail that is often held erect. Its short, stiff hair is dark gray to reddish-brown on the back and light grey or white on the underside.

The numbat is well-known for its distinctive markings. On its face, a black stripe with white borders runs across each eye from the tip of the snout to the base of each ear. On the numbat’s back and hindquarters are 4 to 11 white stripes. The numbat’s markings help it blend into its surroundings on the forest floor.

Although the numbat has excellent daylight vision (perhaps the sharpest of any marsupial), it hunts primarily by smell.

You can see what a numbat looks like in the video below:

The numbat was once widespread in Australia, with populations in Western Australia and South Australia, as well as in parts of New South Wales, Victoria and the Northern Territory. By the late 1970’s, the introduction of the European red fox (Vulpes vulpes) had caused the numbat to become extinct throughout much of its original range.

Only two natural numbat populations remain today: one in the Dryandra Woodland conservation area, and one in the Tone-Perup Nature Reserve, both of which are in Western Australia.

Today, the numbat is only found in eucalypt forests and woodlands. In the past, numbats also inhabited other semi-arid habitats (habitats with very little rainfall). These included mulga woodland (mulga is a small tree that grows in dry areas), grasslands and even sand dunes.

The numbat can only survive in areas that are warm and dry enough to support adequate termite populations. They also need plenty of natural shelters such as fallen logs.

What Do Numbats Eat?

The numbat is an insectivore (specialist insect eater) that feeds on various termite species. Despite also being known as the banded anteater, the numbat only eats ants by accident. An adult numbat eats 15,000 to 20,000 termites each day – about 10% of its body weight.

The numbat’s claws may be powerful, but they’re no match for a fortress-like termite mound. Instead, the numbat has to break into the shallow passages leading to and from the mound.

These passages are only used when the termites are active. Therefore, in order for its raids to be successful, the numbat has to synchronize its hunting forays with termite activity.

During the winter the numbat searches for termites from mid-morning to mid-afternoon. In summer it avoids the hottest part of the day, and forages in the morning and again in the late afternoon.

The numbat first locates the termites using its keen sense of smell. It then digs into the ground with its front claws, and uses its narrow snout to probe into gaps. The numbat captures the insects with its long tongue, which is covered in sticky saliva. 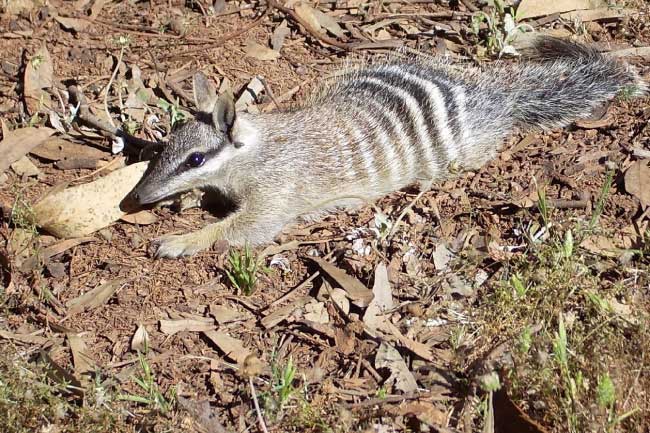 The numbat is one of the few marsupials that are solely active during the day. At night it sleeps in hollow logs, or in burrows lined with soft plant material such as grass, leaves, shredded bark and flowers.

When threatened, the numbat can use its rump – which has a very thick skin – to block the entrance of its nest.

The numbat is solitary and territorial. Both male and female numbats establish a territory of about 1.5km2 (370 acres), which they defend from individuals of the same sex.

Although the numbat is not frequently vocal, it has been reported making a variety of noises, including hisses, growls and a repeated ‘tut’ sound.

During December and January male numbats begin to search for females, venturing outside their normal ranges and advertising their presence by leaving scent marks. A distinct red stain caused by the secretions appears on the throat of the males at this time.

In February or March, the females give birth to four young after a gestation period of 15 days. The newly-born young are only 2cm (0.79in) long and remain attached to their mother’s nipples for 6 to 7 months. Unusually for a marsupial, the female numbat does not have a proper pouch. The young are protected in folds of skin surrounded by long, thick hair.

When the young are 9 months old, the mother begins to leave them in the nest while she goes foraging, only returning to suckle at night. The young are weaned at 10 to 11 months of age, and are fully developed and able to establish their own territories at 12 months of age.

Because the numbat is active during the day, it is vulnerable to many different predators.

Many reptiles and birds of prey native to Australia, such as the wedge-tailed eagle (Aquila audax), the sand goanna (Varanus gouldii) and the carpet python (Morelia spilota) prey on numbats.

However, it is the introduced predators – in particular the red fox (Vulpes vulpes) and the feral cat (Felis catus) – that have caused the greatest decline in numbat numbers.

Is The Numbat Endangered?

The numbat is rated ‘Endangered’ by the IUCN.

It’s estimated that fewer than 1,000 mature numbats remain in the wild. Conservation measures include creating fenced sanctuaries, predator control, and releasing captive-bred juveniles into the wild to boost the existing populations.

The numbat is a characterful and distinctive Australian animal, and it would be a tragedy if it were to become extinct. Let’s hope the conservation measures are successful and that numbers of this little marsupial begin to recover.