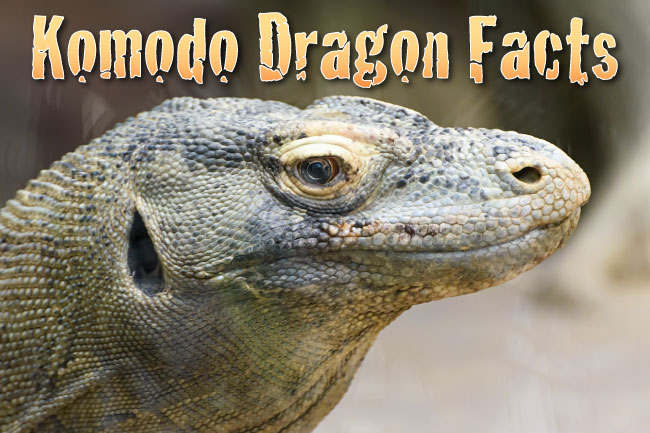 Komodo dragon facts, with pictures and video. Learn about the biggest lizard in the world!

Komodo Dragon Facts At A Glance

The Komodo dragon is the largest living lizard species on Earth. Large males weigh up to around 90 kg (198 lb.), and are around 2 m (6.56 ft.) in length. Females are smaller, reaching weights of around 50 kg (110 lb.). Other than size there is very little outward difference between the sexes.

The Komodo dragon has a flat head with a rounded snout, a powerful body, short, sturdy legs, and a muscular tail. The tail, which can be used as a powerful, whip-like weapon, makes up half of the dragon’s body length.

The Komodo dragon’s skin is tough and scaly. Mature Komodo dragons are a dull brown-gray color, but younger dragons can be more brightly colored, with yellow or green bands and patches.

Where Does the Komodo Dragon Live?

Komodo dragons are found on the Indonesian islands of Komodo, Rinca, Flores, Gili Motang, and Padar. (Indonesia is a country in Southeast Asia that is made up of thousands of islands.)

Komodo island is shown on the map below. You can zoom out to see where the island is in relation to the rest of the world.

The preferred habitats of the Komodo dragon are dry open grassland, savanna, and tropical forest.

Watch TV naturalist Steve Backshall come face to face with a Komodo dragon in the video below:

What Does the Komodo Dragon Eat?

Although the Komodo dragon can run up to 20 km/h (12.4 mph) in short bursts, it prefers to hunt by stalking and ambushing its prey. It has sharp, serrated teeth that are very effective for tearing out chunks of meat. Unusually for a lizard, the Komodo dragon has a powerful bite.

Is The Komodo Dragon Venomous?

There has been much debate over whether the severe after-effects of a Komodo dragon’s bite are caused by bacteria present in the animal’s saliva, or by venom.

Until relatively recently, it was thought that bacteria growing in the rotting flesh in the Komodo dragon’s teeth caused animals bitten by the dragon to succumb to infection.

Observations have shown that even if an animal manages to escape a dragon’s initial attack, it will often die from infection within a few days. Researchers have found over 50 types of bacteria in a Komodo dragon’s mouth, 7 of which are extremely infectious.

However, recent studies suggest that the Komodo dragon has venom glands, and that the lizard’s victims succumb to its venomous bite rather than infections caused by bacteria.

The Komodo dragon can see relatively well in the daylight, but its eyes lack the rod cells found in animals with good low-light vision.

The range of sounds a Komodo dragon can hear is lower than that of a human.

By pulling its tongue in and out, the Komodo dragon captures molecules from the air and transfers them to a specialized organ located on the roof of its mouth. This organ, called the Jacobson’s organ, analyzes the molecules and enables the dragon to locate its prey. The dragon also has a unique gait, swinging its head from side to side, which helps it capture more smells.

The Komodo dragon is a voracious eater. Its throat, jaws and stomach can easily expand to contain large amounts of food. It can consume up to 80% of its body weight in a single meal, and can eat prey items as big as a goat by swallowing them whole.

The Komodo dragon is diurnal (active during the day), although it seeks shelter when the sun is at its hottest. During the night it sleeps in burrows that it digs with its powerful claws. 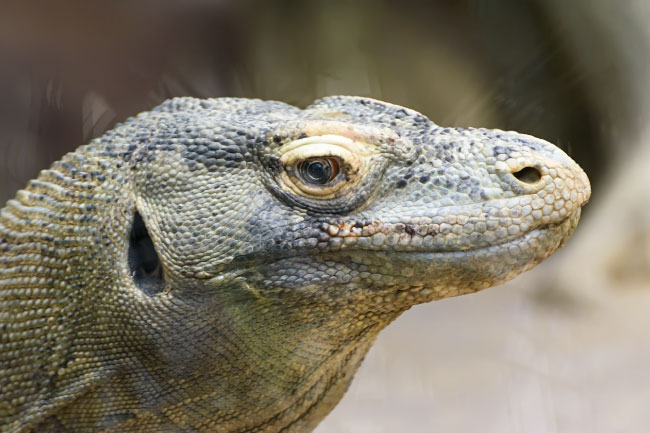 The mating season falls in the summer, during the months of July and August. Males will often fight with other males to mate with a female. When fighting, dragons stand on their hind legs and attempt to push their opponents to the ground.

Females lay their eggs around 110 days after mating, and bury them in a nest in the ground. They usually lay 22 eggs, but can lay up to 30. The eggs hatch around 8 months later.

Adult Komodo dragons don’t tend to their young, although females can be protective of their nests before the eggs hatch. Hatchlings will often fall prey to bigger Komodo dragons, as well as to other predators.

Is the Komodo Dragon Endangered?

The Komodo dragon is Endangered. Although the species is the dominant predator in its ecosystem and has no natural predators (except for other Komodo dragons), it is threatened both by habitat loss and by a lack of prey caused by overhunting by humans.

The Komodo National Park was established in 1980 on Komodo and neighboring islands. It was originally created as a refuge for the Komodo dragon, and now serves to protect the overall biodiversity of the islands.

We hope that you have enjoyed finding out about the world’s largest lizard! Now discover more about the animal kingdom by visiting these pages: