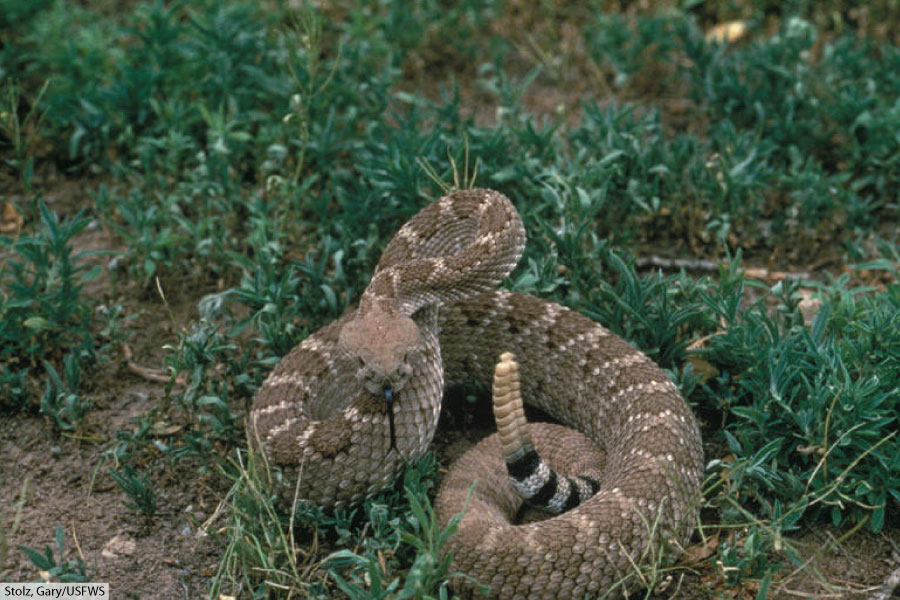 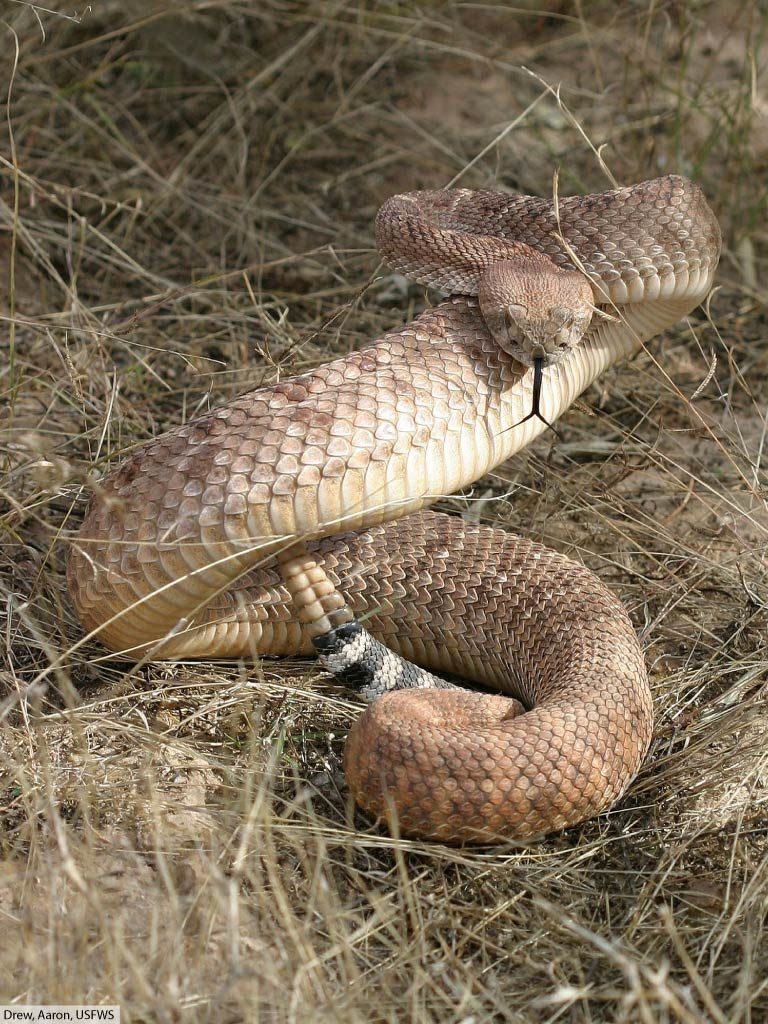 * ITIS (the Integrated Taxonomic Information System) currently lists 47 rattlesnake species (as of May 2019).

The western diamondback rattlesnake is a member of the subfamily Crotalinae. Members of this subfamily are known as ‘pit vipers’ on behalf of the special heat-sensing ‘pit organ’ located between the eye and nostril on either side of the face.

The pit viper subfamily Crotalinae is part of the viper family Viperidae.

You can see footage of a wild western diamondback rattlesnake in the video below:

An adult western diamondback rattlesnake is typically between 1.2 and 1.5 m (4 and 5 ft.) in length, although individuals exceeding 2 m (6.56 ft.) are known.

The snake’s body is brown-gray in color. Running along its back are up to 45 diamond or hexagon-shaped blotches (it is from these markings that the snake gets its ‘diamondback’ name). The blotches are a darker brown than the underlying skin color and have dark edges. They are bordered by sandy-yellow lines.

The snake has a broad, triangular head. A pair of diagonal white lines can often be seen on each cheek. The snake’s undersides are off-white and unmarked.

The snake’s tail is marked with 2 to 8 black and white rings. Located at the tip of the tail is the snake’s rattle: a row of pale-brown, hardened, hollow scales.

A new segment is added to the rattle every time the snake sheds its skin. Despite this, the number of segments in the rattle is not a reliable indicator of the snake’s age, as sections can drop off over time. A very old snake may have lost all of its rattle. Young rattlesnakes don’t have rattles.

When threatened, a rattlesnake will rapidly vibrate its tail. This causes the segments to knock against each other, producing a rustling sound which is amplified by the hollow scales.

A rattlesnake’s tail rattle tells potential predators that the snake is aware of their presence and ready to strike.

Like all vipers, the western diamondback rattlesnake has a pair of hollow, retractable fangs positioned at the front of the mouth. The snake’s venom, which is produced by glands located behind the eyes, is injected into the snake’s prey via these hollow fangs.

Where Is The Western Diamondback Rattlesnake Found?

The western diamondback is found in the southwestern United States and northern and central Mexico. The species has also been sighted on a number of islands in the Gulf of California.

In the United States, the species is found in southern California, the extreme south of Nevada, Arizona, New Mexico, Texas, Oklahoma and Arkansas. Specimens present in Kansas may have been introduced.

The western diamondback rattlesnake is solitary outside of the mating season.

The species’ activity pattern changes seasonally. During the summer it is often active at night; in spring and fall it is more likely to be active during the day.

The western diamondback rattlesnake brumates (a condition similar to hibernation) between October and early March. Brumation is carried out in a shelter such as a cave, rock crevice or animal burrow. Multiple snakes (even snakes of different species) may brumate together in a communal den.

Mating takes place in the spring after the snakes emerge from brumation. During this time male rattlesnakes engage in ritualized fighting. This involves the combatants coiling their bodies around one another with their heads held high off the ground.

The western diamondback rattlesnake is ovoviviparous. This is a reproductive system in which an animal’s young develop in eggs within the mother’s body. The young then ‘hatch’ from the eggs prior to being born.

The western diamondback rattlesnake’s young take 6 to 7 months to develop. A brood typically consists of 8 to 10 young, although broods of up to 25 young are known.

The young snakes can be as long as 30 cm (12 in) at birth. Giving birth to a large number of relatively large snakes is a lengthy process, and can take up to 5 hours. However, after giving birth the mother can relax; her young disperse a few hours after being born and she plays no further part in their rearing.

What Do Western Diamondback Rattlesnakes Eat? 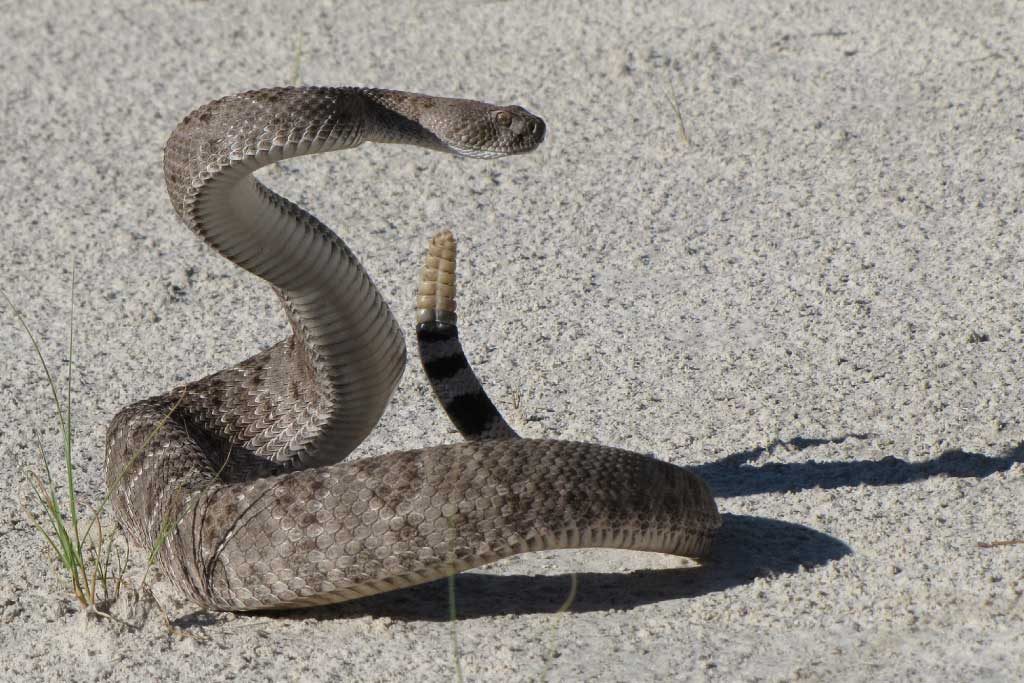 The snake may occasionally also consume birds, lizards, amphibians, fish, and even invertebrates such as grasshoppers.

The rattlesnake detects prey using its heat-sensing pit organs, which are located behind the nostrils. One quick bite delivers a deadly amount of venom. Occasionally, the snake loses its teeth when it strikes. This is only a temporary hindrance since lost teeth can be replaced multiple times a year.

The snake swallows its incapacitated prey whole. It typically feeds once every two to three weeks.

The snake is able to live off of stored fat reserves when prey is unavailable and is able to survive for up to two years without eating.. During such times the snake’s metabolism slows down dramatically.

The western diamondback rattlesnake has many predators, including: hawks, bald eagles, owls, coyotes, foxes, roadrunners and other snakes.

Is The Western Diamondback Rattlesnake Dangerous To Humans?

The western diamondback rattlesnake has a reputation for being the most aggressive rattlesnake. Although the species’ venom is less toxic than that of many other rattlesnakes, it is delivered in higher quantities per bite.

If left untreated, the bite is potentially fatal to humans. Because antivenom is readily available, bites are rarely lethal.

Is The Western Diamondback Rattlesnake Endangered?

The western diamondback rattlesnake is rated ‘Least Concern’ by the IUCN. This is because the species is found over a large area, and has a healthy adult breeding population believed to exceed 100,000 individuals. In addition, there are no major threats affecting the species as a whole.

Local populations are known to decline as a result of habitat loss and other human interference. This includes events known as ‘rattlesnake round-ups’ in which snakes are removed from the wild in large numbers.

1 thought on “Western Diamondback Rattlesnake Facts, Pictures & Info: Get The Lowdown On An Iconic American Reptile”