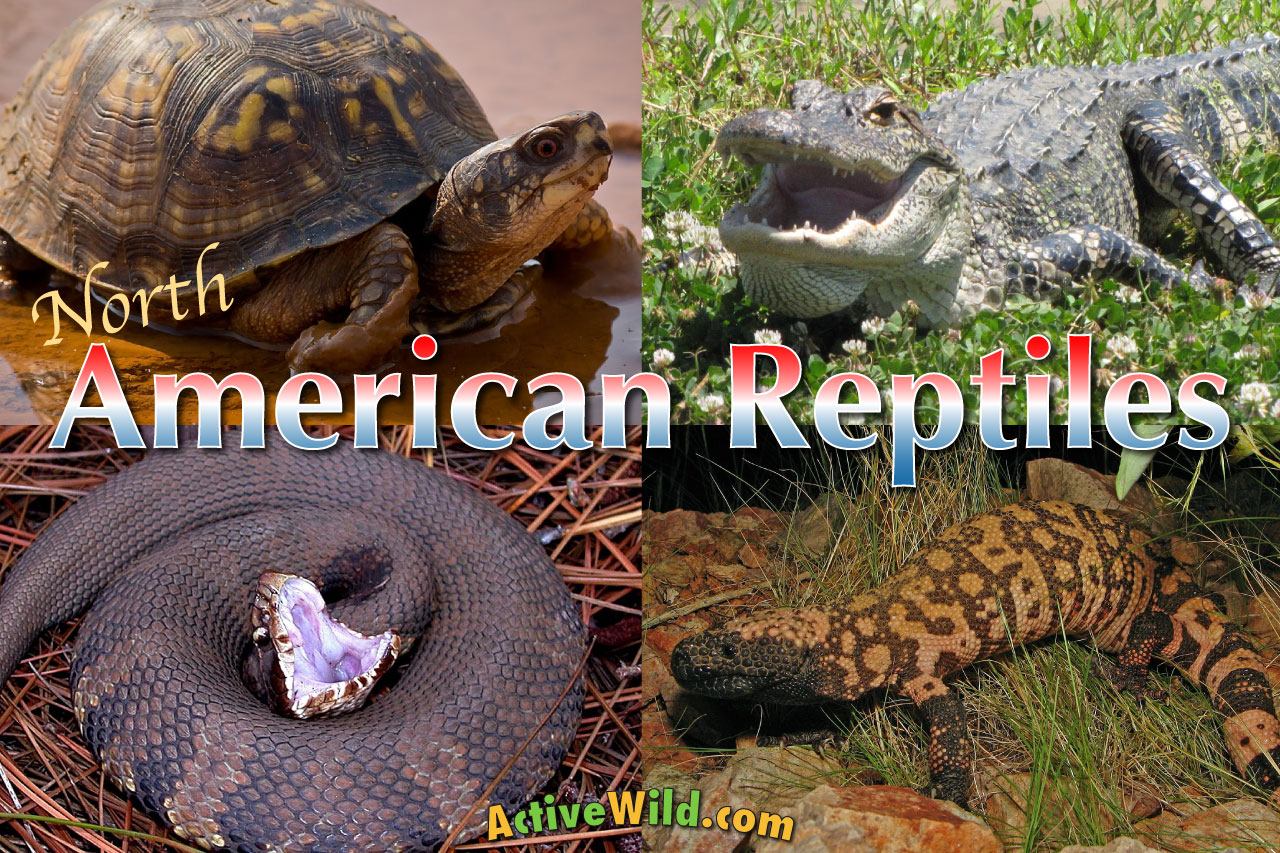 North American Reptile List with pictures and facts. From the fearsome American crocodile to the slow-moving desert tortoise, North America is home to a wide variety of reptile life.

On this page you’ll find pictures and interesting information on some of the most amazing North American reptiles.

Most of the reptiles below are found in the USA, with some also being found in Canada and Mexico. We’ve included common and less familiar species, giving you an excellent overview of reptilian life in the United States and its neighbors.

Did you know that there’s a lizard that can squirt blood from its eyes and a turtle that uses its tongue as bait to catch fish? Check out the Texas horned lizard and the alligator snapping turtle…

Discover amazing reptiles from all around the world:

The alligator snapping turtle is the world’s largest freshwater turtle. It can be distinguished from its cousin, the snapping turtle, by its larger size and ridged shell. (The ridges on the shell resemble an alligator’s skin, hence the species’ name.)

On the tip of the alligator snapping turtle’s tongue is a worm-like extension. This is used as bait to lure fish towards the turtle’s powerful jaws.

It may be king of the alligators, but the American alligator is smaller than the American crocodile, a species with which it shares the southernmost part of its range.

The American alligator can be distinguished from the American crocodile by its darker coloration and blunter snout.

The species is found in freshwater, where it feeds on a wide range of prey, including fish, birds, mammals and other reptiles.

The American crocodile is a large crocodile found in northern South America and Central America. The species is also found in southern Florida. Here it shares part of its range with the American alligator.

The American crocodile has pale grey-green skin and a pointed snout. Males typically grow up to 16ft. (4.8 m) in length, but larger individuals do occur.

The species lives in coastal areas and in some rivers. It is found in brackish water (i.e. water that is a mixture of fresh and saltwater) and saltwater. It has a varied diet that includes fish, mammals, reptiles and birds.

The species is usually found in trees, but is also seen on fences and walls.

The video below shows a Carolina anole changing color:

The common box turtle is found in a wide range of habitats, including forests and grasslands. It will enter water in order to cool down.

The chuckwalla is a large desert lizard in the iguana family, Iguanidae. It is found in the Sonoran and Mojave Deserts. Individuals vary in appearance, with most being a dark black, brown or green color. It has loose skin and a blunt tail.

The chuckwalla is harmless to humans. If threatened, it will flee to a rocky crevice. Here it will wedge itself in by inflating its lungs.

The common garter snake is a thin snake with an average length of around 22 in. (55 cm). It usually has three yellow-brown stripes running the length of its body. The background color is brown, often with darker spots.

The common garter snake is found in a variety of habitats, including forests and wetlands. It is commonly found near water.

The species is mildly venomous but not dangerous to humans. Its venom helps it to subdue its prey, and also provides protection from predators.

The copperhead is a member of the snake subfamily Crotalinae, otherwise known as the pit vipers. It is usually between 2 and 4.5 ft. (60 to 137 cm) in length. Its color is a coppery-brown, with darker cross-bands along the length of its body.

The copperhead is mainly found in forests and woodlands. The venomous snake is an ambush predator that feeds predominantly on rodents. Its bite, although extremely painful, is rarely fatal to humans.

Like the copperhead, the cottonmouth is a pit viper. The species also known as the water moccasin. This semiaquatic reptile is found in swamps, streams and lakes.

The species is usually between 2 and 6 ft. (60 to 182 cm) in length. It has a large head and broad body. It is often black in color. Younger snakes can be tan with dark patterns. This coloration can fade with age. The inside of the mouth is white.

This venomous snake has a bite that is potentially (but rarely) fatal to humans.

This small turtle is found from the Florida Keys to Cape Cod, and has one of the largest ranges (the area in which a species is found) of all North American turtles (not including the sea turtles). It is found in brackish (a mixture of fresh and saltwater) coastal waters.

The female diamondback terrapin has a shell length of up to 9.5 in. (24cm), and can be up to twice the size of the male.

The name of the diamondback terrapin refers to the patterns on the upper part of its shell.

The eastern coral snake is a brightly-colored, mid-sized snake. Its body is ringed with red and black bands separated by narrower yellow bands. The species is between 12 and 24 in. (61 and 122 cm) in length. It is found in a variety of habitats including woodlands and rocky hillsides.

The bite of the eastern coral snake is potentially fatal to humans.

The Gila monster is the only venomous lizard found in the United States. It has a stout body that is covered in bead-like scales. The coloration is yellow-orange with blotchy black / brown patterns. The tail is short and blunt.

The Gila monster inhabits desert habitats. It uses its venom to capture small vertebrate prey, and will also eat insects and carrion. It is thought that the bright patterns serve as warning coloration to deter predators. Despite its fearsome reputation, bites from this slow-moving reptile are rare and non-fatal to a healthy human.

The Mojave desert tortoise has a shell length of 9 to 14.5 in. (23 to 37 cm). It is slow-moving and herbivorous (plant-eating), with front paws that are flattened for digging.

Found throughout much of the United States, the racer snake earned its name by being fast moving and agile. The species reaches around 60 in. (152 cm) in length. Color varies between the several subspecies.

The racer snake is non-venomous. It is usually found grassland habitats, but is also common in suburban habitats.

The ribbon snake is a species of garter snake. It is a thin snake that reaches no more than 3 ft. (91 cm). Three yellow strips run along the length of its dark body.

The ribbon snake is only mildly venomous and is not a threat to humans. The species is often kept as a pet. In the wild, it feeds mainly on invertebrates such as insects and worms.

The slender glass lizard is a legless lizard that moves in a similar way to snakes. It is found in grasslands and woodlands and is often seen on roads.

If caught by a predator, the slender glass lizard has the ability to shed part of its tail. This remains moving even when parted from the body.

The stinkpot is a small turtle found throughout much of eastern North America. It reaches a maximum shell length of around 5.5 in. (14 cm). Its shell is smooth and highly domed. A pale stripe runs along either side of the head.

The stinkpot spends most of its life in the water. It inhabits creeks, streams and ponds. If threatened, the stinkpot secretes a foul-smelling yellowish substance.

The flattened, rounded body of the Texas horned lizard is gray or yellow / red-brown. The back and tail are covered with rows of sharp, spine-like scales. The head is protected with horns that contain bone.

If threatened, the Texas horned lizard is able to squirt blood from its eyes. This not only startles potential predators, but the blood itself is also foul-tasting to canines and felines.

This small lizard is found in dry desert, grassland and rocky habitats. It is a pale yellow-brown color, with darker stripes and spots.

The western banded gecko is nocturnal, and feeds on insects and spiders. If threatened it curls its tail over its back to resemble a scorpion. It is also capable of shedding its tail as a decoy if captured by a predator.

The western diamondback rattlesnake is a venomous snake found in dry grasslands, deserts, and rocky areas. It is grey-brown in color. Along its body are a series of darker diamond-shaped patches with pale borders. Around its tail are several alternating black and white rings.

Like other rattlesnakes, the western diamondback rattlesnake will shake its ‘rattle’ – a group of dry scales on the tip of its tail – if threatened. This results in a rattling warning sound.

The bite of the western diamondback rattlesnake is potentially fatal to humans.

We hope that you have enjoyed finding out about some of the many amazing reptiles that live in North America.

You can find out more about reptiles on the following pages: