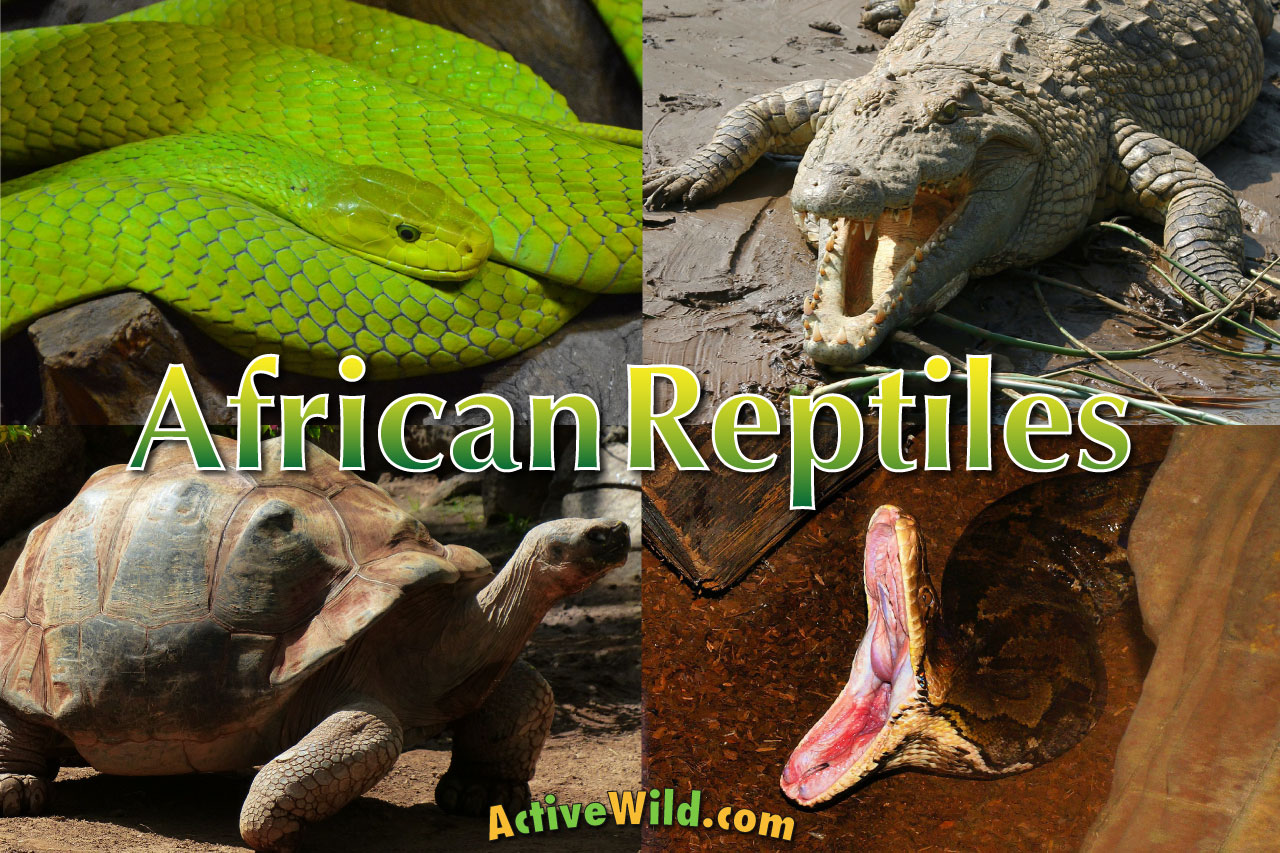 African Reptiles List with pictures and facts. On this page you’ll find a list of the most amazing reptiles found in Africa.

From the fearsome Nile crocodile to the bizarre-looking Parson’s chameleon, the reptiles of Africa are as diverse as the continent’s numerous habitats.

On this page you’ll find pictures and facts about African reptiles both common and less well-known. Included are each species’ scientific name and conservation status.

Scroll down to see all the reptiles, or use the quick links below to jump to the reptiles you want to see…

See amazing reptiles from other parts of the world:

(You can find out more about African crocodiles here: African Crocodiles List.)

The dwarf crocodile is the world’s smallest crocodile species. It is found in tropical regions of sub-Saharan Africa (that is, the region south of the Sahara Desert). It inhabits streams, pools and swamps in forested regions.

The dwarf crocodile is nocturnal. During the day it rests in a burrow or under tree roots. 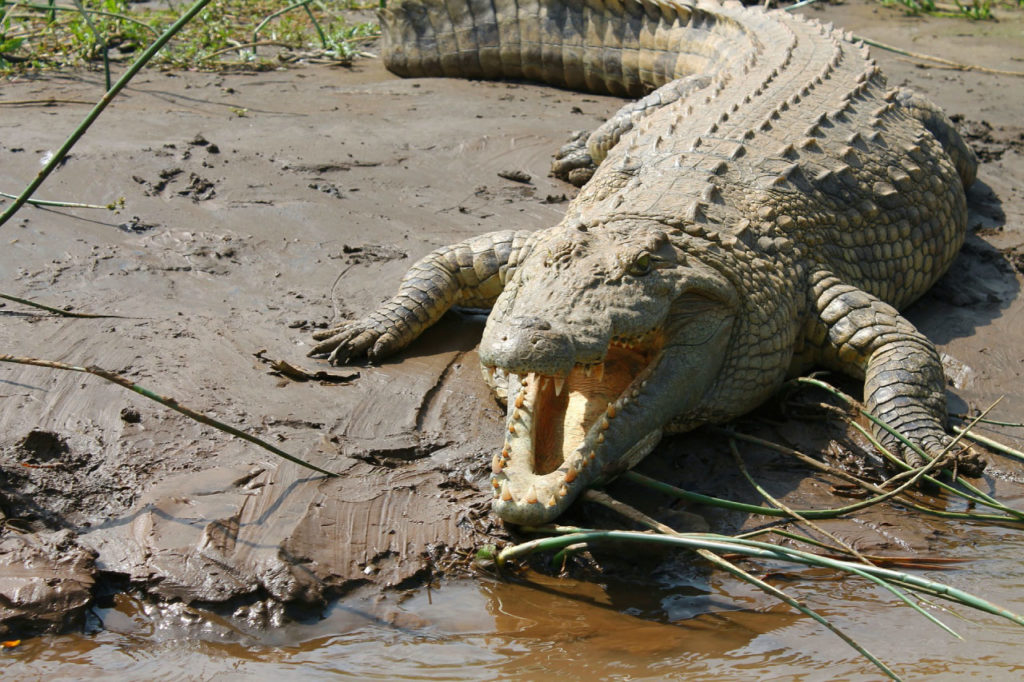 No list of African reptiles would be complete without the The Nile crocodile. This fearsome animal is the largest reptile found in Africa, and the world’s second-largest reptile (after the mighty saltwater crocodile). The species can reach lengths of over 6 m (20 ft.).

A full-grown Nile crocodile is capable of taking prey as large as a wildebeest or buffalo. It is also responsible for hundreds of human fatalities every year.

The Nile crocodile is found in streams, lakes, swamps and rivers throughout Sub-Saharan Africa.

Little is known about the slender-snouted crocodile. As its name suggests, the species has a slender snout that resembles that of a gharial. This has led to its alternative name, the African gavial.

This medium-sized crocodile is a fish-eating specialist, although it will also take a variety of other prey animals, including reptiles, mammals and birds. Unlike other crocodiles, it has been known to climb into trees.

The giant plated lizard is a large lizard found in rocky, mainly dry regions of southern Africa. The species can grow up to 75 cm (30 in.) in length, and has a stout, flattened body.

The species is very shy. If threatened, it will run into a rocky crevice and inflate its body – this makes it hard for a potential predator to pull the lizard out.

The Nile monitor is the longest lizard found in Africa, and the second heaviest (after the rock monitor). It is the second largest reptile found in the Nile River (after the Nile crocodile). The species can reach lengths of around 220 cm (7 ft. 3 in.), and even larger specimens have been reported.

The Nile monitor is also an invasive species in other parts of the world, including Florida.

The Nile monitor is found alongside rivers, and has an aquatic lifestyle. It is an excellent swimmer, and is thought to be able to remain submerged for up to an hour.

The Nile monitor is a voracious predator. It will take a wide range of prey, and will also eat carrion. The species has even been seen working in teams, with one lizard distracting a Nile crocodile away from its nest, and another stealing the larger reptile’s eggs!

The black-necked agama is a member of Agamidae, a family of lizards found not just in Africa, but also in Asia, Australia and parts of Europe. The species is mainly found in eastern Africa. It grows to around 16.7 cm (6.57 in.).

During the breeding season, males have bright blue heads and yellow backs.

The black-necked agama is also known as the southern tree agama. It is an ambush predator that only spends around 4% of its time actually moving. It preys mainly on insects.

Parson’s chameleon is only found on the island country of Madagascar. It lives in forests on the east of the island. The species occurs in a variety of colors, including dull green and bright blue. Like many chameleons, it is also able to change its color.

The male Parson’s chameleon has bony ridges running from above its eyes to its nose, where they form warty horns.

Parson’s chameleons eat insects and other small animals, which they catch with their extra-long, sticky tongues. (A chameleon’s tongue can be twice the length of its body.) 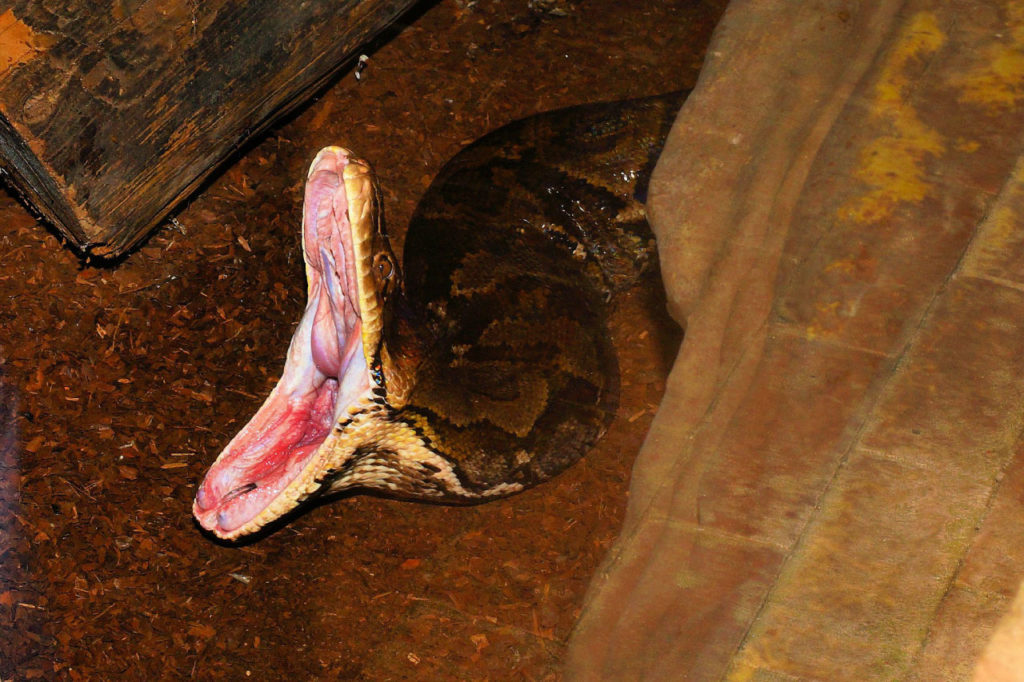 The African rock python is non-venomous. It subdues its prey via constriction. The species is able to take animals as large as antelopes – and it has been known to prey on juvenile Nile crocodiles!

The species can be recognized by its large size, triangular-shaped head, and blotchy, chestnut-brown to olive markings.

Due to its size, speed and the potency of its venom, the black mamba is one of Africa’s most dangerous snakes. It is the world’s second-longest venomous snake, reaching lengths of over 3 m (9.8 ft.).

The black mamba is usually an olive-brown color (color varies between individuals). The ‘black’ in its name refers to the inky-black color of the inside of its mouth, which is somewhere you don’t want to spend too much time looking at!

The black mamba, although mostly found on the ground, can also climb trees. 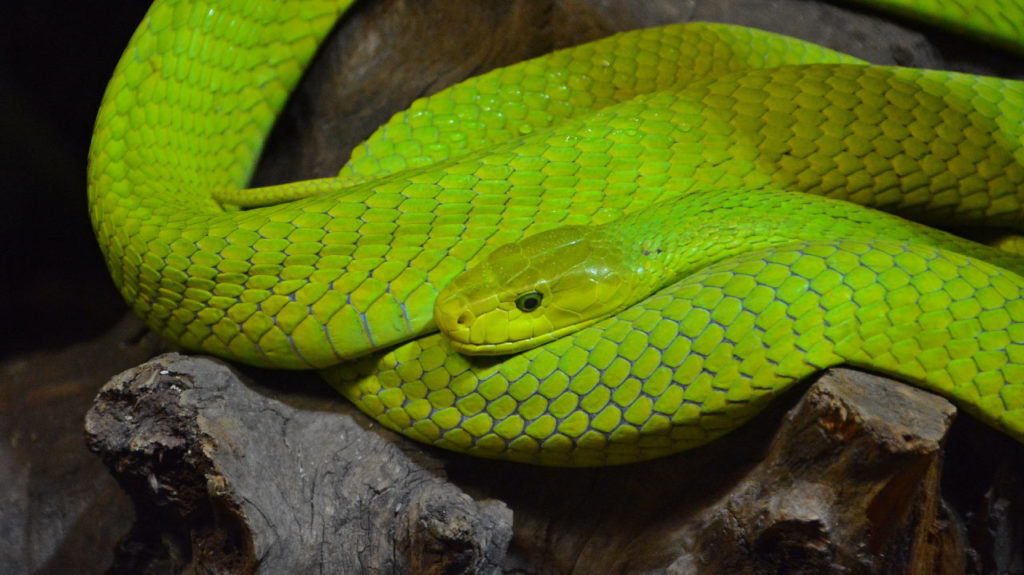 The eastern green mamba is a medium-sized snake found mainly in coastal regions of southern and eastern Africa. Females are slightly larger than males and reach up to around 2 m (6.56 ft.) in length.

The species is arboreal (tree-dwelling) and its bright-green color provides camouflage for this environment.

The eastern green mamba is highly-venomous. It preys on birds (and their eggs), rodents, and other small animals. Although attacks on humans are rare, the bite can be fatal if untreated.

The gaboon viper is notable in several ways. Firstly, it’s the largest venomous snake found in Africa. It also has the longest fangs of any snake. In addition, it also carries the largest amount of venom of any snake.

Once it has sunk its fearsome fangs into its victim, the gaboon viper doesn’t release its bite immediately. Thankfully, attacks on humans are rare; the species is docile and unaggressive.

The species is pale brown, with patterns of darker brown diamonds and lighter stripes. Its head is shaped like a leaf, and has a dark line running along the center to complete the disguise.

The puff adder is found in many parts of Africa but is not present either in the continent’s rainforests or in the Sahara desert.

The species is highly-venomous and has an aggressive temperament. These factors, together with the wide range in which it is found, make it Africa’s deadliest snake. The puff adder is responsible for more human fatalities than any other.

The usual length of a puff adder is around 1 m (3.28 ft.), but large specimens of almost twice this length have been reported. The species is pale brown in color and has darker patterns running along the length of its back.

This distinctive northern African snake species has a pair of sharp horns projecting from above its eyes. The horns are not present on all individuals.

The Saharan horned viper is found in dry, sandy habitats. The species ranges in color from sandy yellow to brown. Its skin is pattered with darker blotches. The snake’s skin is the same as that of the ground in whichever region it is found.

The Saharan horned viper moves by ‘sidewinding’. This involves the snake anchoring points of its body on the ground and moving sideways. This means of locomotion is also used by the sidewinder rattlesnake – another desert species.

The African spurred tortoise is the third-largest type of tortoise in the world, and the largest found on the mainland; only the various Galapagos tortoises and the Aldabran tortoise are larger (these tortoises are found on islands).

The African spurred tortoise can reach lengths of 83 cm (33 in) and weights of 105 kg (231 lb.). It inhabits desert regions and is found on the southern edge of the Sahara desert from Mauritania in the west to Ethiopia and Eritrea in the east.

The African spurred tortoise digs burrows into which it retreats during the hottest part of the day. 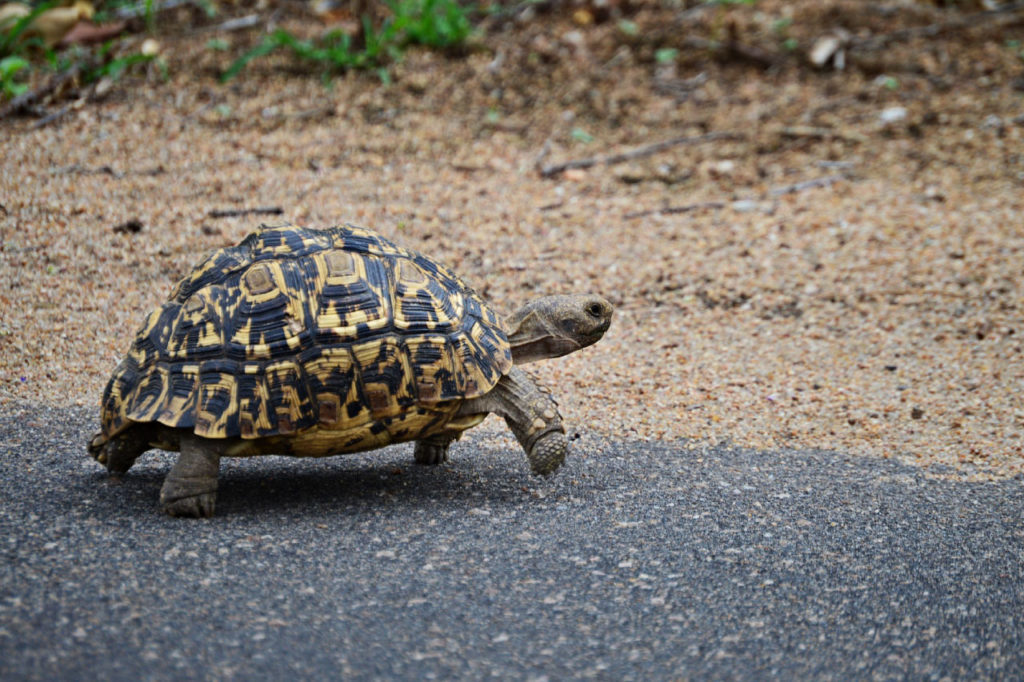 The leopard tortoise is the fourth largest tortoise in the world. It reaches lengths of around 40 cm (16 in).

The species can be recognized by its distinctive, highly-domed and elaborately patterned carapace (the upper part of the shell).

The leopard tortoise inhabits dry grasslands. It is herbivorous, and feeds on a variety of grasses and other plants.

The East African black mud turtle is also known as the black-bellied hinged terrapin and the pan hinged terrapin. The ‘hinged’ part of these names refers to the hinged section of the species’ plastron – the part of the shell covering the turtle’s undersides.

The carapace – the top of the shell – is dull brown, while the plastron is yellow-brown. The species reaches a length of around 20 cm (7.87 in.). It is found in swamps, streams and rivers in many tropical and subtropical parts of Africa.

We hope that you have enjoyed finding out about some of the many amazing reptiles that live in Africa.

You can find out more about reptiles on the following pages:

See amazing reptiles from other parts of the world: