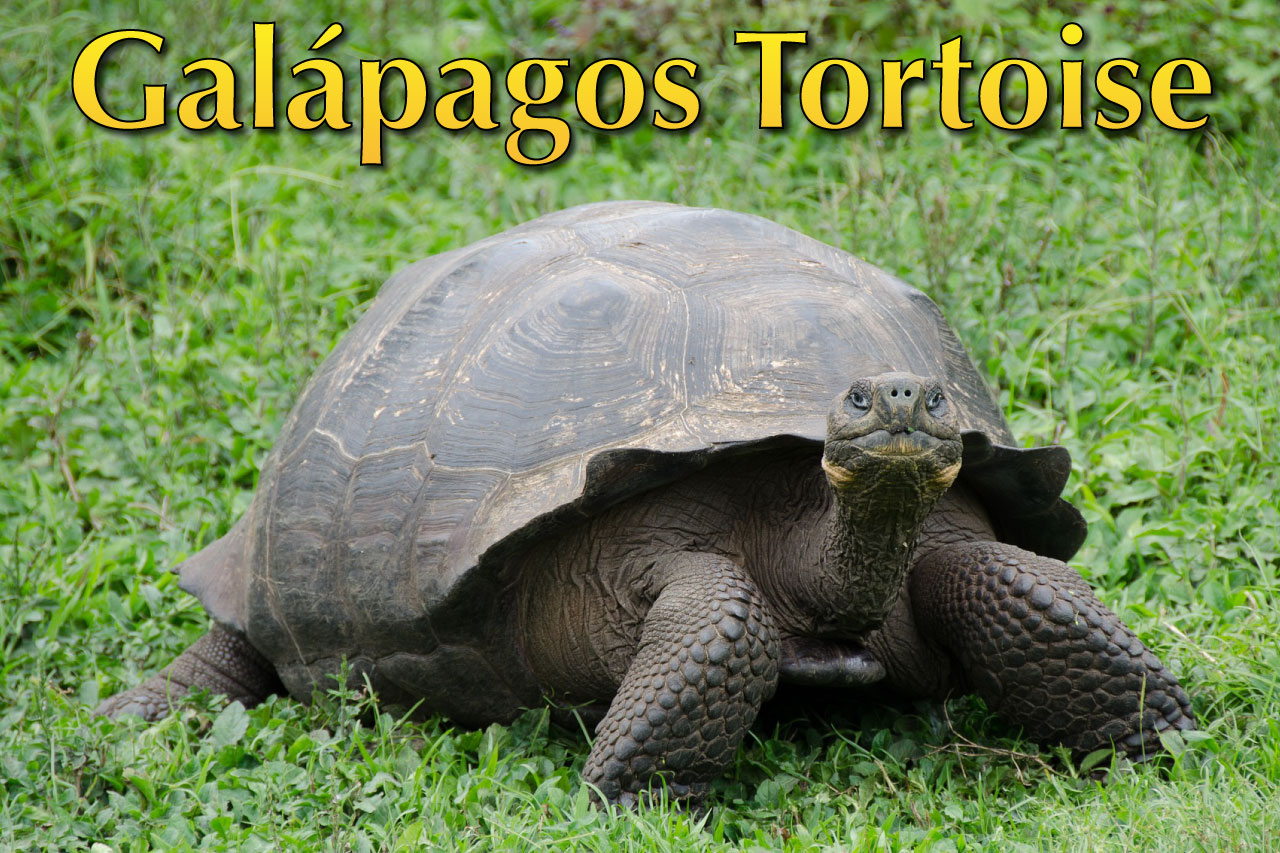 Galápagos tortoise facts, pictures and information. Discover some of the world’s longest-living species.

Galápagos tortoises inhabit the remote islands of the same name. They evolved with very few natural predators. Today, due to hunting and the introduction of non-native predators, many of the 10 to 15 species of Galápagos tortoise are now threatened.

Galápagos Tortoise Facts At A Glance

In the past, scientists considered the giant tortoises of the Galápagos Islands to be subspecies of a single species.

Today, each subspecies is considered to be separate species in its own right. Scientists still disagree over how many Galápagos tortoise species there actually are.

Galápagos tortoises are among the world’s longest-lived animals. They typically live for over 100 years in the wild.

See amazing footage of wild Galápagos tortoises in the video below: 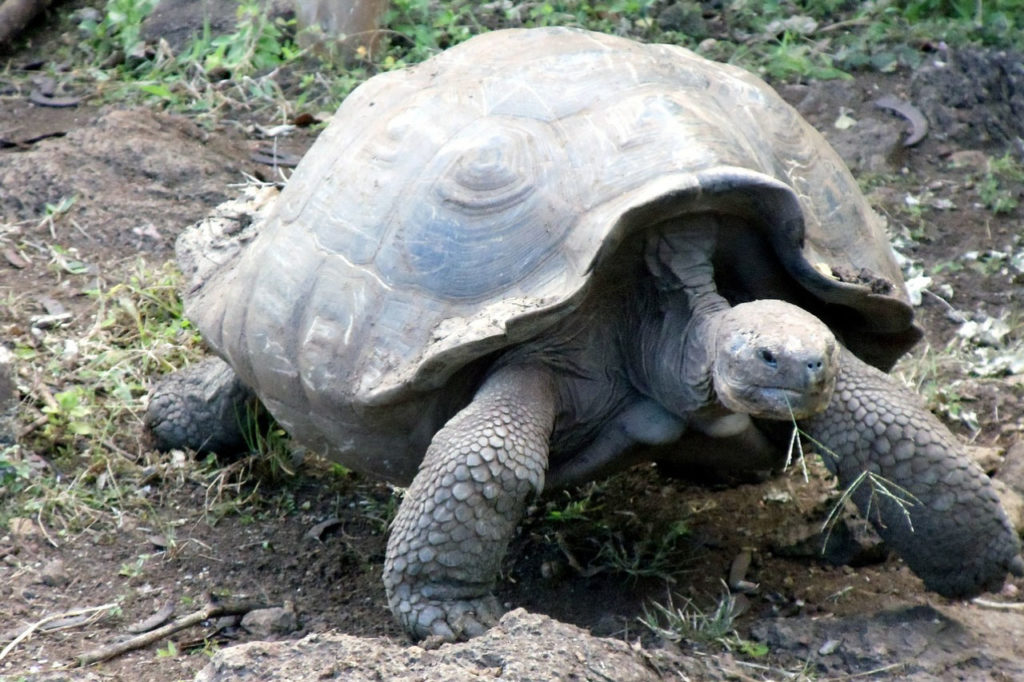 The shells of Galápagos Tortoises are grey or grey-brown in color. The limbs are sturdy, the skin thick and scaly.

Depending on the species, the shell can either be domed (rounded) or saddle-shaped (with a front that curves upwards). Tortoises with domed shells tend to be larger in body size. Saddle-backed tortoises tend to have longer limbs and necks.

Both types of giant tortoises are able to pull their limbs and necks into their shells when threatened.

Male tortoises are typically larger than female and have long tails. The largest recorded Galápagos tortoise weighed over 400 kg (880 lb.) and reached a length of 1.87 m (6.1 ft.).

Galápagos tortoises are endemic to (i.e. only found on) the Galápagos Islands. These remote volcanic islands lie in the Pacific Ocean, around 1,000 km (620 mi) west of mainland Ecuador.

You can see where the Galápagos Islands are situated on the interactive map below:

According to DNA studies, the easternmost islands of Española and San Cristóbal were the first to be colonized by the giant tortoises some 2 to 3 million years ago. Local currents then dispersed the reptiles to several of the other larger islands in the archipelago.

On Isabela (the largest of the Galápagos Islands), five volcanoes (Wolf, Darwin, Alcedo, Sierra Negra and Cerro Azul) are each inhabited by different species of giant tortoise.

The tortoises move between different habitat types throughout the year. They inhabit areas with the greatest abundance of food at any given time. In general, this means higher elevations during the dry season and grassy lowlands during the wet season. 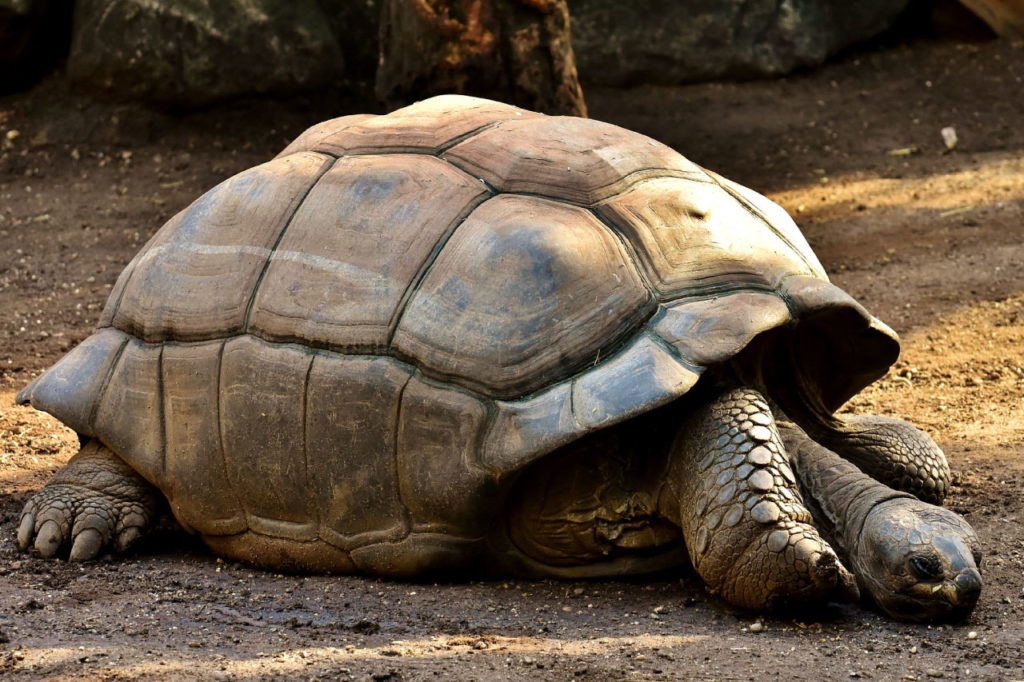 Galápagos tortoises are ectothermic (cold-blooded); their body temperatures are dependent upon their environment. They bask in the sun for up to 2 hours after sunrise in order to warm up.

The tortoises usually forage for food in the morning and late afternoon. This activity takes up around 8 hours of the day. The tortoises rest from the remainder of the day.

During the wet season, the tortoises spend much of their time resting in mud-wallows and shallow pools. During droughts, the animals may rest continuously for several weeks.

At night, the tortoises typically sleep either in ‘pallets’ – depressions in the earth or brush – or under overhanging rocks.

Giant tortoises on more humid islands are known to aggregate in large herds, whereas the tortoises inhabiting arid islands tend to be more solitary and territorial.

Galápagos tortoises usually mate between January and May. Nesting takes place during June and December when temperatures are cooler.

One way in which rival males establish dominance is by comparing how high they can stretch their necks. The winner then mates with the female, often pushing and biting her to prevent her from walking away.

Female tortoises move to the coast to nest. Here they spend several days digging nests in the dry, sandy soil. Females lay clutches of up to 16 hard-shelled eggs in the completed nests. Each female may lay between 1 and 4 clutches per season.

On hatching, the young tortoises need to dig their way to the surface. This can take several weeks.

What Do Galápagos Tortoises Eat?

The tortoises don’t have teeth. Instead they use the bony margins of their mouths to crush their food.

Galápagos tortoises get most of the water they need from their food. On arid islands the tortoises may also lick the morning dew from rocks. The tortoises are also able to drink large quantities of water in short periods of time and store it for later use. The stored fat and water in a tortoise’s body can keep it alive for up to a year.

Adult Galápagos tortoises have no natural predators. Prior to the arrival of humans on the islands, the young were only been preyed upon by the (now rare) Galápagos hawk (Buteo galapagoensis).

Today, introduced mammal species such as feral pigs, dogs, cats and rats now feed on both the tortoise eggs and the young.

The rating given by the IUCN to the Galápagos tortoise varies from species to species: some  are rated ‘Vulnerable’, some ‘Endangered’, and some ‘Critically Endangered’.

Over the centuries, over-exploitation of the tortoises for meat and oil as well as introduction of non-native species to the islands (which increased competition and predation) caused a huge decline in tortoise numbers: from an estimated 250,000 individuals in the 16th century to about 3,000 in the 1970s.

Conservation efforts such as strict laws, efforts to eradicate non-native mammals, and captive breeding programs have increased the total number of Galápagos tortoises. At the beginning of the 21st century the total population was around 19,000.