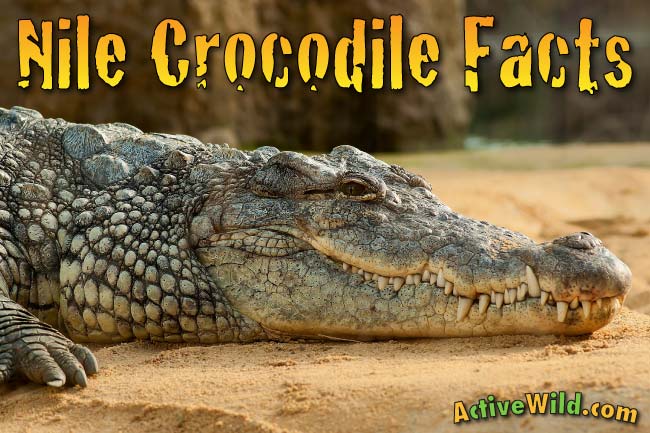 This page contains amazing Nile crocodile facts for kids (and adults). This animal is part of the Active Wild Online Zoo: information, pictures and videos of all your favorite animals!

Nile Crocodile Facts: At A Glance

Watch the video below to see Nile Crocodiles in the wild:

The Nile crocodile is one of Africa’s deadliest predators. This huge reptile, which can grow to lengths of over 6 meters, is capable of taking down pretty much any animal that ventures too close to its watery domain.

The Nile crocodile is one of four species of crocodile found in Africa, the others being the slender-snouted crocodile, West African crocodile, and dwarf crocodile.

The Nile crocodile is an invasive species in the United States, and at least three specimens have been captured near Miami.

The Nile crocodile is typically crocodilian in appearance, having a long, streamlined body that is carried close to the ground on four short legs. It has a powerful tail, and a large mouth filled with sharp teeth.

The Nile crocodile’s skin is covered with tough scales, and bony plates called scutes line its back and tail. The Nile crocodile is dark olive-green in color. Its undersides are yellowish-white. Juveniles have dark stripes, which disappear as they get older.

The Nile crocodile’s eyes, ears and nostrils are located on the top of the head. This enables the Nile crocodile to remain almost fully submerged while still being aware of everything going on above the water.

The Nile crocodile’s powerful jaws hold 64 to 68 sharp, pointed teeth, which are replaced if they get broken.

The Nile crocodile’s bite force has been recorded to be an incredible 22,000 newtons, making the Lion’s bone-crushing 4,450 newton bite seem more like a nibble.

Crocodiles live in close proximity to one another, and may even work together to herd fish into places where they can easily be caught.

Crocodiles are also surprisingly good parents, guarding the eggs and looking after the young for up to 2 years.

The Nile crocodile is an apex predator, and sits at the very top of the food chain. An adult Nile crocodile will take virtually any animal that comes within range of its deadly jaws.

Even other predators such as lions are in danger if caught by surprise by a determined crocodile.

Nile crocodiles will prey on large mammals such as giraffes, rhinos and gorillas, although they usually target smaller prey such as antelopes and zebras.

The hippo, with whom the Nile crocodile shares its aquatic habitat, is less likely to be targeted. Even hippo calves are seldom taken, because they are well guarded by their extremely dangerous mothers.

Birds, fish, amphibians and invertebrates are all on the menu for the Nile crocodile. The size of potential prey increases with the size of the crocodile.

The Nile crocodile is an ambush predator. It waits for its victim to draw near then bursts out of the water, using its tail as well as its legs to burst forwards.

The crocodile uses its phenomenal bite force to grab hold of its victim, then drags the unfortunate animal under the water.

The Nile crocodile’s jaws are built for biting rather than chewing. It swallows smaller prey whole. Larger prey is shaken and ripped into smaller pieces, or broken up in a tug-of-war with other crocodiles.

The Nile crocodile will also steal prey from other predators such as African wild dogs, lions and hyenas.

The Nile crocodile, like all crocodilians, is cold-blooded, and doesn’t have to expend energy on maintaining its body temperature. It is inactive for long periods of time, and can go for long periods without eating.

Nile crocodiles are among the most dangerous animals in Africa. Because the crocodiles live in close proximity to human settlements, they come into frequent contact with humans.

Nile crocodiles are responsible for hundreds of human fatalities every year. Because attacks are predatory in nature rather than in self-defense, the Nile crocodile can be considered the most frequent predator of humans in the animal kingdom.

Females dig a nest hole on the bank and into it lays between 25 and 80 eggs. She then covers the eggs with sand, creating a nest mound.

The female stays present in the area to guard the eggs until they hatch, which usually takes around 90 days. The temperature of the nest mound determines the sex of the hatchlings.

The female Nile crocodile guides the hatchlings to the water, sometimes even transporting them in her mouth. She’ll continue to look after them for around 2 years.

Video: Crocodile mother taking a baby crocodile into the river.

Is The Nile Crocodile Endangered?

The Nile crocodile is not endangered, and its conservation is ‘Least Concern’.

Q1. On which continent are most of the world’s Nile Crocodiles found?

Q2. Which of the following animals are NOT crocodilians?

Q3. What is the only crocodile species larger than the Nile crocodile?