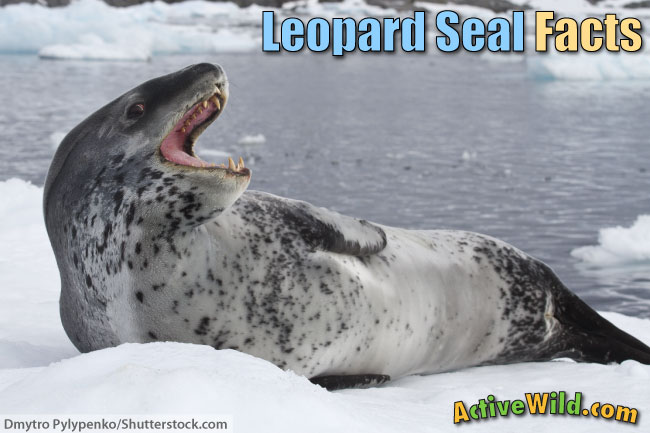 This page contains leopard seal facts for kids (and adults). This animal is part of the Active Wild Online Zoo: information, pictures and videos of all your favorite animals!

Video: See A Leopard Seal In The Wild

You can see amazing footage of a leopard seal in the wild in the video below:

The scientific name for the leopard seal is Hydruga leptonyx which literally translates as “small clawed water worker”. The leopard seal lives in the cold waters of the Antarctic region, although some young seals travel further north to the southern coastlines of Australia or New Zealand. Leopard seals are solitary creatures, spending most of their lives alone.

How to Recognize A Leopard Seal

The leopard seal is a large, muscular animal. It has a dark grey or black back and pale grey undersides. Its body is covered with distinctive, leopard-like black spots, which is how it got its name. Females are slightly longer and heavier than males.

Young leopard seals are known as pups. Pups have a soft, thick coat with a dark stripe on the back and a light grey colored stomach with some black spots.

What Do Leopard Seals Eat?

The Leopard Seal is an Excellent Swimmer

The leopard seal has very large fore-flippers, making it a fast and graceful swimmer, but clumsy on land. It spends the majority of its life in the water.

Whereas other seal species swim by moving their rear ends from side to side, the leopard seal also uses long, powerful, simultaneous strokes of its fore-flippers.

The leopard seal can dive for up to 15 minutes at a time before coming back up for air. It can swim at speeds of up to 25mph (40km/h). 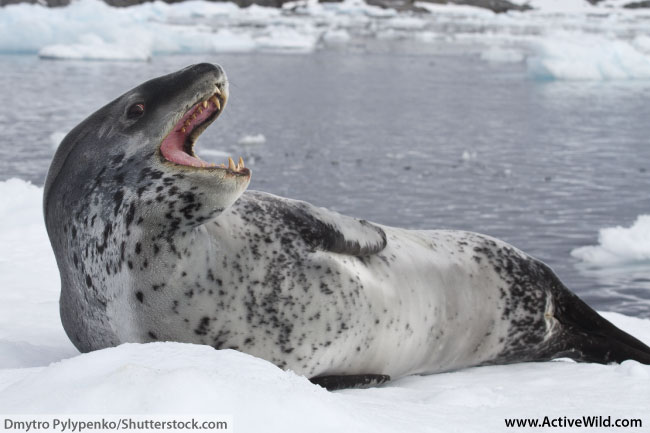 The male leopard seal spends long periods of time ‘singing’ under the water. These vocalizations have been recorded by scientists. It is thought leopard seals sing underwater in an attempt to attract a mate.

Females become mature between 3 and 7 years, while males reach maturity a little later at 6 or 7 years. The males and females come together for the mating season between November and February.

Female leopard seals are pregnant for 11 months. They usually give birth to one pup, which will be a whopping 1m long and up to 32kg in weight!

When the pup is born, the mother and pup live on a large floating chunk of ice. The mother digs a den in the ice to keep the pup warm and protected. She will nurse the pup with her own milk, which is high in fat and very nutritious. After one month the pup is ready to start hunting in the water.

How Do Leopard Seals Keep Warm?

Leopard seals are insulated from the freezing cold waters by a thick layer of body fat known as “blubber”. Young seals have a layer of water repellent fur to help keep them warm, until they grow a sufficient layer of body fat.

If the skin is damaged it loses heat very quickly. A leopard seal’s skin can easily be damaged by the constant swimming or by crossing over the rough ice. Therefore once a year, leopard seals go through a molting process. This means they shed their damaged outer skin and produce a brand new one to help keep them warm!

No, leopard seals are not endangered. They are currently rated under “Least Concern” by the IUCN.

Q3. What is the name of the seal’s thick layer of body fat?