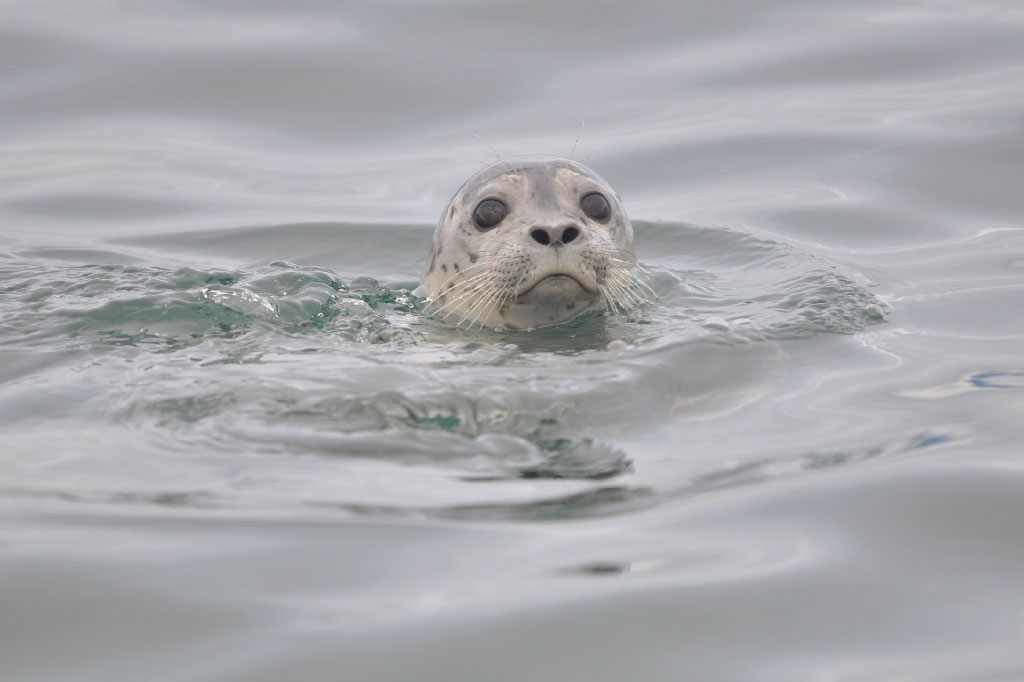 Harbor seal facts, pictures & in-depth info. The harbor seal (also known as the common seal) is marine mammal found in coastal regions of both North America and Europe. With a streamlined body and a layer of blubber for insulation, the species is fully adapted for a marine lifestyle. Individual harbor seals can be identified by their unique pattern of spots.


Read on to find out more about this fascinating marine mammal…

Harbor Seal Facts At A Glance

The harbor seal is a marine mammal in the true seal family (Phocidae). It is the world’s most widespread pinniped*, and is found as far north as Svalbard (a Norwegian island group in the Arctic Ocean) and as far south as Mexico.

*The pinnipeds are a group of marine mammals consisting of the true seals, the eared seals (the sea lions and the fur seals) and the walrus.

Like all true seals, the harbor seal lacks external ears, and when on land can only move by dragging itself along with its front flippers. (By contrast, eared seals such as the California sea lion have external ear flaps, and can move on land by ‘reversing’ their hind flippers and using them as feet.)

The harbor seal has a streamlined body, a rounded head and two pairs of flippers. There are five claws on each flipper. A thick layer of blubber under the seal’s skin provides insulation from the cold water.

The seal’s snout is dog-like and has V-shaped nostrils. Being a true seal, the harbor seal has no ear flaps, but its ear openings can be seen behind the eyes.

There is a wide variation in the color of the harbor seal’s coat, which ranges from white / silver-grey to black / dark brown. Each seal has a unique patterning of spots.

The harbor seal is smaller, has a rounder head and a more concave forehead than the grey seal – a species with which it shares part of its range.

Where Is The Harbor Seal Found?

The harbor seal is the most widespread of all pinnipeds. The species occurs in coastal waters throughout the temperate and polar regions of the Northern Hemisphere, including coastal regions of the northern Atlantic Ocean, the Pacific Ocean, the Baltic Sea and the North Sea.

Countries / territories in which the harbor seal is found include the United States, Canada, Russia, Japan, Greenland, Iceland, the UK, France, and several other western and northern European countries.

In the UK the harbor seal is more commonly known as the common seal. It is one of two seals found in the UK, the other being the larger (and more common) grey seal.

The harbor seal mainly inhabits shallow coastal waters, and can be found in bays, estuaries and intertidal areas. In some areas the species also inhabits rivers and even freshwater lakes. The harbor seal is rarely found more than 20 km (12.42 miles) from the shore.

The harbor seal is diurnal (active during the day). It is largely solitary, although it will form small mixed groups when hauled out to rest or to molt and during the breeding season.

While hauled out, the harbor seal is highly vigilant and easily disturbed. It stays close to the sea and flees quickly into the water if it detects a potential threat.

Molting takes place shortly after pupping. During this time the seal spends much of its time hauled out and is particularly vulnerable to land predators and human disturbance.

The species is non-migratory and tends to keep using the same haul-out sites unless disturbed. Occasionally, the seals will travel up to 50 km (30 mi) to more productive feeding grounds.

Both juveniles and adults engage in play and have been observed playing with kelp and other objects.

The harbor seal tends to vocalize less than other seal species. Vocalizations, including grunts and yelps, are mainly used during the mating season and between a mother and her pup.

The mating season of the harbor seal varies by location. It may occur as early as March or as late as September.

Male harbor seals use a number of strategies to attract mates. These include vocalizing, display diving, defending territories in areas frequently used by females, and fighting over access to females near haul-out sites. Courtship and mating take place in water.

After a gestation period of approximately 10 months, the female gives birth to a single pup (or occasionally, twins). The birth takes place on land.

Young that are born prematurely or very early in the season have a covering of whitish downy hair known as lanugo. Most harbor seal pups have shed their lanugo before birth.

The female nurses her pup for 3 to 4 weeks, making regular foraging trips between feeds. Harbor seal milk is very high in fat, and the pup can double its weight during the first month of its life.

Male harbor seals play no part in looking after the young.

What Do Harbor Seals Eat?

The harbor seal is an opportunistic carnivore, feeding on whatever prey is most abundant and easiest to catch.

The seal also preys on cephalopods such as octopus and squid, and on crustaceans such as shrimp and crabs. Newly-weaned pups feed mostly on crustaceans until their diving abilities improve.

The harbor seal hunts at all depths and will take prey anywhere from the surface to the sea bed. The average depth of a foraging dive is around 91 m (299 ft.), although the species has been recorded at depths of up to 427 m (1,400 ft.).

Although a typical foraging dive lasts for just a few minutes, the harbor seal can stay underwater for half an hour at a time.

The harbor seal is vulnerable to predation both in the water and on land. In the water, harbor seal predators include killer whales, great white sharks, polar bears and even other pinnipeds such as Steller sea lions and walruses.

On land the species is targeted by animals such as bears and coyotes. Eagles may also pose a threat to young harbor seals.

Is The Harbor Seal Endangered?

The harbor seal is rated ‘Least Concern’ by the IUCN.

The species is distributed over a large area, and estimates for the total population size range from 300,000 to 600,000 individuals.

Although there are no major threats affecting the species as a whole, the Ungava seal (P. v. mellonae) subspecies is considered endangered with only a few hundred individuals left.

The most significant threats locally include mass die-offs from disease outbreaks, exposure to agricultural and industrial pollution, and conflicts with fisheries.