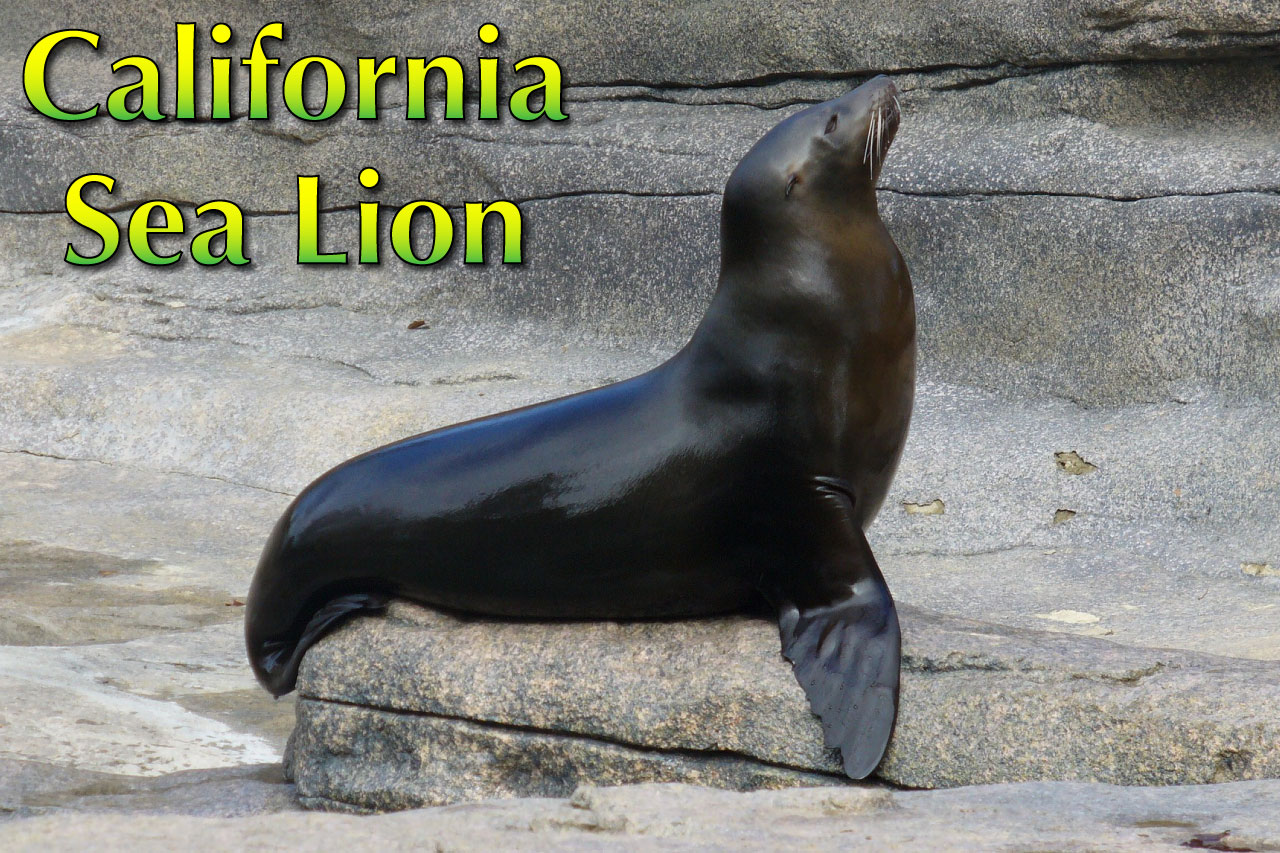 The California sea lion is a marine mammal found along the west coast of North America. A familiar animal from circuses and zoos, the species is known for its dog-like barking call, expert swimming ability and high intelligence.

Let’s find out more about this talented animal …

The California sea lion is an expert swimmer (it has to be in order to catch the squid and fish that form the bulk of its prey). You can see this amazing marine mammal in action in the video below…

The California sea lion is one of 6 sea lions and 15 otariids that are alive today. Other otariids include the fur seals and the walrus.

The ‘Zalophus’ part of the California sea lion’s scientific name is derived from Greek and means ‘intensive crest’. It refers to the domed forehead of the male of the species.

Sea lions, together with all of the other seals (both eared and earless) and the walrus, form a group of marine mammals known as pinnipeds. The pinniped’s closest relations on land are mammals such as bears and weasels.

The California sea lion has a stream-lined body and two pairs of flippers. Its face is dog-like with a narrow snout. The small external ears are visible behind the eyes. A thick layer of blubber (fat) under the skin insulates the animal from the cold.

There is a large difference in size between males and females. Males are 3 to 4 times as heavy and up to 1.2 times as long as the females. Male California sea lions are also more robustly built, with thicker necks and broader shoulders. Males can also be identified by a patch of blond / lighter hair on their bony crests.

The color of the male’s coat ranges from light brown to black. Adult females and juveniles tend to be golden brown in color.

The California sea lion is found along the western coast of North America from the Gulf of Alaska in British Colombia (Canada) to the Gulf of California (Mexico).

The California sea lion is found in bays, harbors and river mouths along the coastline. The species will also forage for food in deeper waters over the continental shelf (the relatively shallow waters surrounding a land mass).

During the mating season California sea lions congregate on remote sandy or rocky shores. Non-breeding individuals may gather on man-made structures such as piers and jetties.

The California sea lion is a fast, agile swimmer. It is capable of reaching speeds of around 10.8 km/h (6.7 mph) in the water.

The sea lion’s powerful front flippers do much of the work while the animal is swimming. Its flexible spine enables quick turns.

The sea lion’s heart rate slows down when the animal is diving. This adaptation allow the sea lion to make longer dives before having to come up for air.

The California sea lion can dive continuously for 9.9 minutes, and has been recorded at depths of 274 m (899 ft.). However, the majority of dives last for under 3 minutes, with the animal reaching depths of around 80 m (260 ft.).

The California sea lion is a social animal. It is often seen ‘hauling out’ (temporarily resting on land) or floating on the surface of the water in groups. However, the animal usually travels alone or in smaller groups.

Another commonly-observed behavior of California sea lions is ‘rafting’ – floating motionless on the surface of the water with the flippers held up.

Female California sea lions tend to forage near the breeding sites throughout the year, while adult and sub adult males often migrate north outside of the breeding season.

The California sea lion is known for its noisy, social behavior. A variety of vocalizations are used to communicate, both in and out of the water. The best-known of these is a dog-like barking call. This is most often made by males, particularly during the breeding season, when it can be heard almost continuously. The bark is also used as part of a threat display.

Females locate their pups in crowded breeding areas (known as ‘rookeries’) using a special call that the pup can identify. Both mother and pup are able to identify one another both by call and by scent.

Mating takes place between May and August. During the breeding season the sea lions gather on islands or remote beaches. Here the males compete among each other to establish and control territories.

Dominance is established with ritualized displays. These include head-shaking, lunging and staring. During the mating season males can go without food for as long as 45 days by relying on fat stored in their bodies.

Females move from one territory to another and may even mate outside a territory. Each female gives birth to one pup per year. Births take place in June or July, approximately 11 months after mating. Newborn pups weigh 6 to 9 kg (13 to 20 lb.) and are black or brown in color.

The female nurses her newborn pup on the shore for around 7 to 10 days. She will then begin to go on foraging trips which last from 2 to 5 days. While the mother is away foraging the pup is left on the beach and will not feed. Between each foraging trip the female will stay and feed her pup for 1 to 2 days.

This foraging / feeding cycle will continue for between 5 and 12 months until the pup is weaned.

It is important not to disturb a California sea lion pup found on the beach. It is perfectly natural for it to be left alone while its mother is away foraging.

The California sea lion is vulnerable to predation by killer whales (Orcinus orca) as well as by the great white shark (Carcharodon carcharias) and other large shark species.

Is The California Sea Lion Endangered?

The California Sea Lion is rated ‘Least Concern’ by the IUCN.

The population is large and appears to still be growing slowly in some areas. The species is also fully protected in the United States.

The most notable threats to California sea lions are human-animal conflicts, and the natural phenomenon known as El Niño, which causes a rise in water temperature for several months every 4 to 12 years. The warming causes a drop in fish numbers, which in turn leads to large numbers of sea lion pups starving.