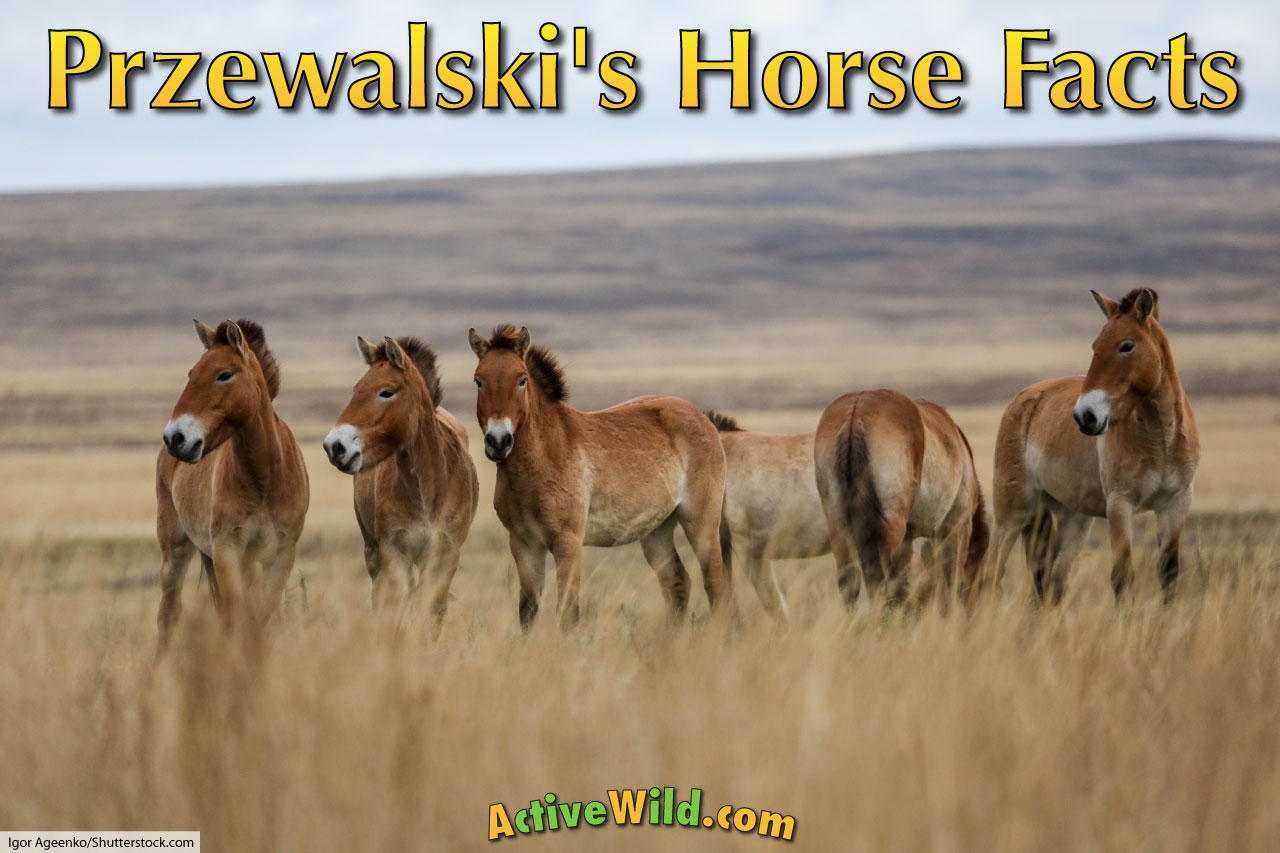 Przewalski’s horse facts, pictures and in-depth information. Przewalski’s horse is a wild horse that became extinct in the wild in the 1960’s. Today’s wild population is formed of the descendants of just 12 captive specimens.

Przewalski’s Horse Facts at a Glance

Przewalski’s horse was named after the Russian explorer and naturalist Nikolay Przewalski. He first described the animal while exploring in Central Asia in the latter part of the nineteenth century.

(A species is said to be ‘described’ when it is named and recognized as a new species.)

Przewalski’s horse is considered by many to be the last truly wild horse since it has never been domesticated by humans.

The taxonomic status of Przewalski’s horse is debated by scientists. Some consider the animal to be a subspecies (type) of wild horse (Equus ferus).

Nevertheless, the two types of horse are able to mate and produce fertile offspring. If they are not the same species, then they are very closely related.

The species has since been reintroduced into the wild. Reintroductions began in Mongolia in 1992.

All of today’s reintroduced animals are descended from just 12 Przewalski’s horses (caught from the wild between 1899 and 1947) and up to 4 domesticated horses.

The wild population of Przewalski’s horse is now thought to number several hundred. This includes a small population (numbering around 60 horses in 2014) found in the Chernobyl Exclusion Zone (the area surrounding the site of 1986’s catastrophic nuclear accident).

In the fascinating video below, you can see the horses in this deserted area:

Przewalski’s horse looks much like the domesticated horse. However, there are a number of notable differences.

Przewalski’s horse is smaller and more muscular than the domesticated horse. It has robust legs, a thick neck and a large head with a powerful jaw and long ears.

The mane is stiff and erect with almost nonexistent forelocks (the hair that hangs over the forehead). The coat and mane grow thicker and longer during winter. Both winter coat and mane are shed in the spring.

The coloration of Przewalski’s horse is mostly sandy-gray. The flanks are pale brown, the belly and the muzzle are yellowish-white and the mane, tail and the legs are dark.

A dark stripe runs down the animal’s mid-back from the neck to the base of its tail. Faint zebra-like stripes are often present on the horse’s legs.

Where Is Przewalski’s Horse Found? Historically, Przewalski’s horse was found throughout Europe and Asia. The species’ range gradually contracted until all that was left was a population in southwestern Mongolia. As we’ve found, the species finally became extinct in the wild during the mid-20th century.

Today, wild populations are found in a handful of reintroduction sites in Mongolia, China, Kazakhstan and Ukraine.

Przewalski’s horse prefers grassy lowland plains and shrubland. The animal is also able to tolerate the arid conditions of semi-desert habitats provided it has access to waterholes.

The typical home range of a Przewalski’s horse appears to include areas for grazing, a permanent source of water and patches of forest.

Przewalski’s horse typically lives in small family groups known as harems. These consist of a stallion (a male horse typically 5 years of age or older), up to 3 mature mares, and their young offspring.

These family groups may join with others to form larger herds. Stallions without a harem (either because they’re too young or have been unsuccessful in forming one) typically live together in ‘bachelor groups’.

Przewalski’s horse tends to be shy and constantly on the alert for any sign of potential danger. The species is not territorial.

Przewalski’s horses communicate with each other in a number of different ways. These include: vocalizations, scent marking, visual signals (e.g. ear tilting), and touch (e.g. grooming and kicking).

Both mating and giving birth take place during the spring and summer. Pregnancy lasts from 11 to 12 months. The mares come into heat and begin to mate again around a week after giving birth.

The young of Przewalski’s horse are born relatively mature and mobile: foals are able to stand around an hour after birth and start walking soon after.

Weaning takes place between 8 and 13 months of age. The young disperse from their natal harem when they are 2 to 3 years old.

What Do Przewalski’s Horses Eat?

Przewalski’s horse is a herbivore. It feeds mainly on grassy vegetation together with leaves from shrubby trees. It may also eat bark, buds and fruit.

The grasses which make up the bulk of the horse’s diet are low in nutrients. They have to be eaten in large quantities to provide the nutrients that that horse needs.

Przewalski’s horse spends more than half of the day grazing and searching for food and water. Seasonal movements depend largely on the availability of food.

The composition of the horse’s diet also changes from season to season; the horses favor specific plant species during different times of the year.

Przewalski’s horse is currently rated as being ‘Endangered‘ by the IUCN.

The rating was revised from ‘Extinct in the Wild’ (1960s) to ‘Critically Endangered’ (1990s) after the first reintroductions in Mongolia. The current assessment was carried out in 2014.

The horse’s limited range, small population and limited genetic diversity means that Przewalski’s horse is very vulnerable to threats such as disease and severe weather.

Other threats include competition with livestock, and potential crossbreeding with domestic horses.

Przewalski’s horse is protected in Mongolia.