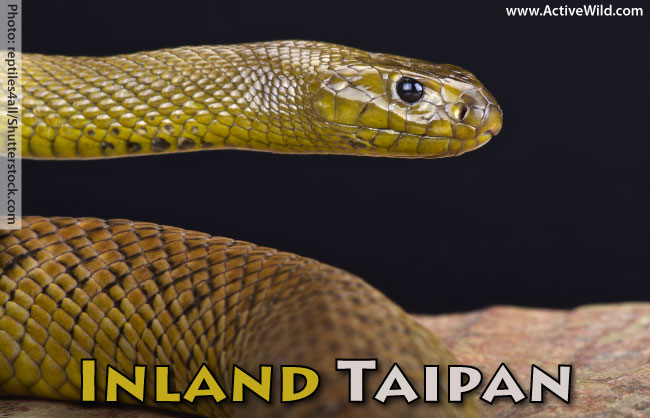 On this page you’ll meet the inland taipan – the world’s most venomous snake! Read on for facts, pictures and information on this deadly Australian animal …

Inland Taipan Facts At A Glance

Discover more about the animal kingdom with Active Wild:

The inland taipan may be the world’s most venomous snake, but this Australian taipan is so shy that hardly anything was known about it by Western science for nearly a hundred years after it was first described in 1879.

A new species is ‘described’ after it has been discovered. Describing a species means giving it a name and telling the scientific world that the new species exists (i.e. ‘describing’ the characteristics of the new species and how it differs from existing species).

The inland taipan’s alternative name, ‘fierce snake’, points to the potency of its venom rather than its behaviour. The other Australian taipan that it shares a common ancestor with, namely the coastal taipan, is far more aggressive.

You can see Steve Backshall come face to face with an inland taipan in the video below:

Where Does The Inland Taipan Live?

The inland taipan lives in the remote black soil plains of the outback where the borders of South Australia and Queensland meet. (The Outback is Australia’s vast interior region.)

The snake seeks protection from both the scorching heat and predators under rocks, inside mammal burrows and within deep cracks in the parched earth.

Warming Up and Keeping Cool

The inland taipan is most active in the early hours of the day, when it surfaces to hunt for prey and to bask in the morning sun. After a few hours it retreats back into its shelter for the remainder of the day, although in cool weather it may show up above ground in the afternoon too.

The inland taipan has adapted to the extremes of the outback climate by dramatic seasonal changes in its coloration. The color of its back varies from a dark brown to almost black in winter. During the summer months it changes to a pale straw color.

These color changes allow the inland taipan to control its temperature, with the darker markings efficient at absorbing heat and the lighter ones good at reflecting it.

The head of the inland taipan is much darker compared to the rest of the body, which makes it possible for the snake to warm up quickly by exposing only its head to the sun. 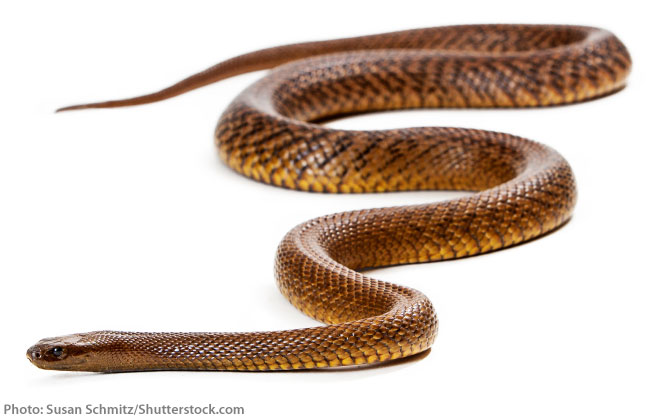 Snakes, being cold-blooded, are not able to change their own body temperatures with processes such as sweating and shivering. They rely on the sun to warm them up.

What Do Inland Taipans Eat?

The inland taipan is one of the few Australian snakes to specialize in eating mammals. It will mainly prey on small to medium-sized rodents, especially the native long-haired rat (Rattus villosisimus), though it will also eat the plains rat (Pseudomys australis) and the introduced house mouse (Mus musculus).

When prey animals are plentiful, the snakes grow fat and their numbers rise. During droughts, they may have to rely on stored body fat.

The Hunter… and The Hunted

When hunting, the inland taipan will typically corner its prey in a crack in the soil or in a burrow. It will then strike, injecting its venom in a series of bites made in quick succession.

The highly effective venom acts so fast that the prey animal is dead within minutes, sometimes even seconds. The swift death of the prey reduces the risk of injury to the snake.

The inland taipan itself is hunted by other reptiles, including the king brown snake (Pseudechis australis) and Australia’s largest monitor lizard, the perentie (Varanus giganteus).

The female inland taipan lays between 12 and 24 eggs at a time. The eggs are hidden in deep crevices in the soil or in abandoned burrows and hatch within 9 to 11 weeks. The babies are about 47cm long when they emerge. Their venom is nearly as potent as that of an adult.

Is The Inland Taipan Dangerous to Humans?

The venom of the inland taipan is considered to be the most lethal of any snake, surpassing even the venom of sea snakes. It has evolved over time to be especially effective in killing mammals, which also makes it extremely toxic to humans.

The venom from a single bite is said to be enough to kill at least 100 men.

On top of its extreme neurotoxicity, the venom also contains an enzyme called a ‘spreading factor’ that speeds up the absorption. An untreated bite has the potential to kill a person in 30 to 45 minutes, which makes immediate medical attention critical.

If provoked, the inland taipan curves its forebody into a raised S-shape in an attempt to fend off the offender. This threat display also prepares the snake for striking.

Don’t start thinking about canceling your dream Australian vacation just yet! Very few people have been bitten by this shy and reclusive snake and there are no recorded deaths associated with the species.

Due to the remoteness of its range, it’s unlikely for humans to even come across the inland taipan in the wild, and when meeting a human it is far more likely to flee than attempt to strike.

Is The Inland Taipan Endangered?

The conservation status of the inland taipan has not been assessed by the IUCN. However, official Australian sources have described the status of the species as Least Concern in South Australia, Near threatened in Queensland and Presumed Extinct in both New South Wales and Victoria. Habitat change is considered to be the most serious threat to the species.

We hope that you have enjoyed learning about the fearsome inland taipan. As you now know, this deadly Australian snake lives far away from humans; you’re very unlikely to see an inland taipan, let alone be bitten by one!