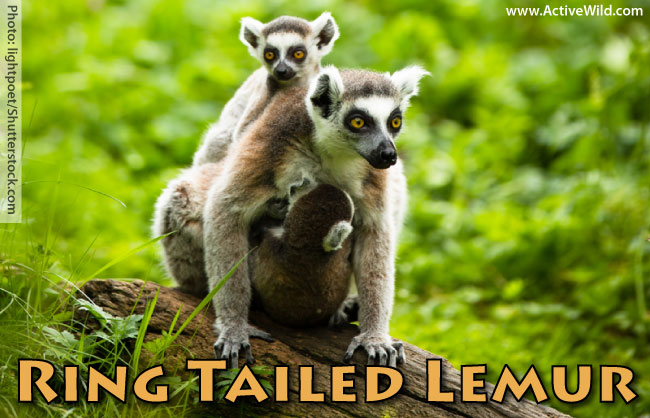 Ring-tailed lemur facts, pictures and information. Find out about Madagascar’s most famous species!

Ring-Tailed Lemur Facts At A Glance

The ring-tailed lemur is the most iconic species of Madagascar. It is instantly recognizable due to its striking black-and-white banded tail, white cat-like ears, black muzzle and dark eye patches, which resemble a mask. It’s the most thoroughly studied of all lemur species and a familiar sight in zoos worldwide.

You can see where Madagascar is on the map below.

The ring-tailed lemur lives in the southern and southwestern parts of the island, with a small isolated population found near the Andringitra mountains. It’s able to tolerate heat and cold as well as scarcity of food, and thus occupies the widest range of habitats of any lemur species.

Its behavior sets it apart from its relatives too: it spends more time on the ground and forms larger social groups than any other lemur species.

Watch the video below to see a troop of ring tailed lemurs in Madagascar:

Life in a Troop

The ring-tailed lemur lives in groups of up to 30 individuals called troops. Related adult females and their young form the core of each troop with one dominant female in charge. Unlike most primate groups, ring-tailed lemur males are subordinate to high-ranking females. Males move from one group to another every few years. 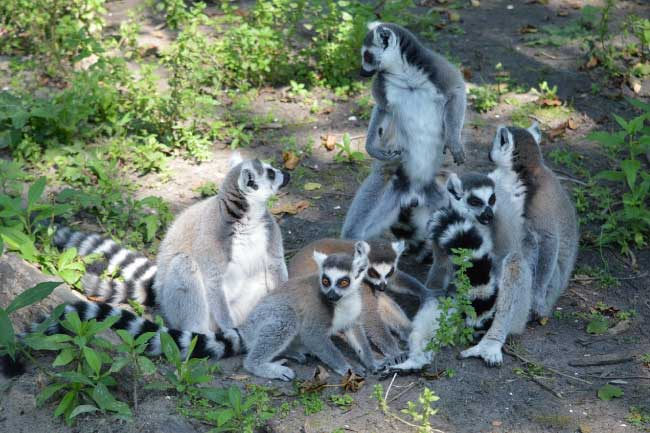 The pecking order among the ring-tailed lemur males is established throughout the year with ‘stink fights’. These involve competing males coating their tails with smelly secretions from the scent glands on their wrists. They then wave their tails at their opponents until one of them gives up and runs off.

During the mating season, clashes between the males get more intense and can also involve ‘jump fighting’, or leaping towards and slashing at a rival with nails and teeth.

Scent is not only important during fights. Scent glands are used by both sexes to mark the home range that changes in size from season to season.

Visual signals are used between members of the same group as well as between rival troops. Menacing stares and postures maintain hierarchy within a group, and when two different troops meet, the dominant females will come forward to defend the home range with similar aggressive displays.

The range of vocalizations of the ring-tailed lemur is impressive with a total of 28 known types of calls from “howls” to “gulps” and “chirps” to “purrs”. Vocal signals are used to warn other group members of predators as well as to communicate excitement, contentment and dominance among other things.

Diet: What Do Ring-Tailed Lemurs Eat?

The ring-tailed lemur prefers to eat fruit and leaves, but it’s an omnivorous species and will roam about in search of a wide variety of foods. The fruit and leaves of the tamarind tree (Tamarind indica) is a mainstay in its diet. Tamarind can form up to 50% of the food intake during the dry season when other foods are sparse.

The ring-tailed lemur will also eat stems, flowers, bark and sap of a variety of plant species as well as cicadas, locusts, spiders and caterpillars. It’s even been known to prey on small birds and chameleons.

In particularly dry habitats, the ring-tailed lemur will top up its water intake by eating succulent plants such as aloe and prickly pears.

The young of the ring-tailed lemur are usually born in the beginning of the wet season in September when food is most abundant. In the wild the female typically gives birth to just one baby, though twins and even triplets are known.

The newborn lemurs cling to their mother’s underside before moving on to ride on her back a couple of weeks later. Because they’re all born around the same time, the young lemurs have plenty of playmates to chase, jump on and wrestle with.

Other members of the troop take part in looking after the young, and in cases where an infant is orphaned, they will step in to nurse and care for it.

Is The Ring-Tailed Lemur Endangered? 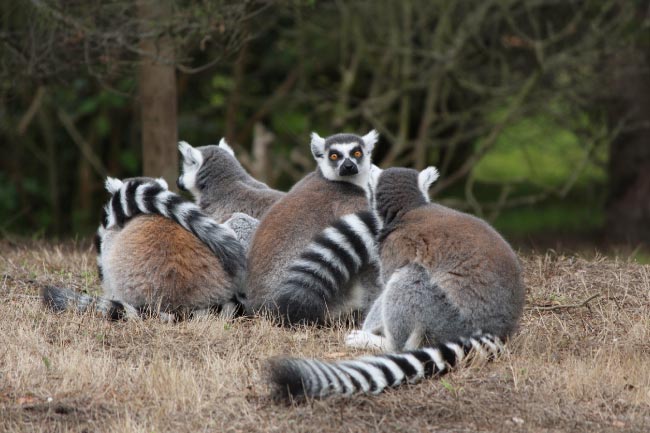 The ring-tailed lemur is currently rated Endangered by the IUCN.

While it is the most common lemur species in zoos around the world and breeds readily in captivity, its numbers in the wild have plummeted to an estimated 2,000 individuals.

Some protected areas have been established in southern Madagascar, but the level of protection they offer varies considerably. Even though the ring-tailed lemur is more flexible in its choice of habitat and occupies a larger range than other lemurs, the patchiness of its distribution has made the species particularly vulnerable to threats.

The principal threats to the ring-tailed lemur include:

Sadly, the ring tailed lemur is yet another example of a well-known animal that is endangered. In fact, in 2013 the IUCN found that of the 103 species of lemur, 24 were listed as ‘Critically Endangered’, 49 were ‘Endangered’ and 20 were ‘Vulnerable’.