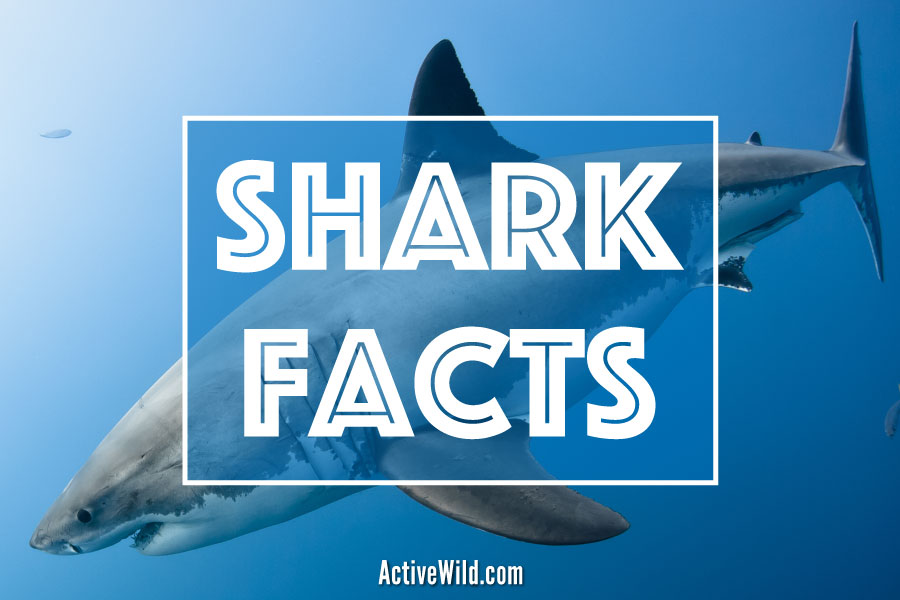 To most people, the word “shark” conjures up an image of a large, sharp-toothed and highly-dangerous marine predator.

While it’s true that sharks should be treated with respect, shark attacks on humans are extremely rare and only carried out by a handful of species; there’s much more to these fascinating fish than movies such as Jaws might suggest. Some of the largest sharks, for example, are harmless plankton-eaters.

On this page, you’ll find a collection of fun facts on sharks that will hopefully stir your interest in this fascinating group of animals…

What Is A Shark?

Sharks are fish, and like all fish they have fins and scales and extract oxygen from the water with gills.

Sharks are members of the class Chondrichthyes, a group of fish commonly known as cartilaginous fish.

The skeletons of cartilaginous fish such as sharks are made of cartilage rather than bone.

Sharks belong to the subclass Elasmobranchii. Also belonging to this group are the closest relatives of sharks: rays, skates, and sawfish.

Sharks are found in a variety of aquatic habitats all over the world, from warm, tropical coral reefs to deep oceans and even under the Arctic ice.

Nearly all sharks are found in marine (saltwater) habitats; only the river sharks (a small group of sharks found in the Indo-Pacific region) and the bull shark are found in freshwater habitats.

Large sharks such as the great white shark, tiger shark, blue shark and mako shark are apex predators, which means that they sit right at the top of the food chain and have no natural predators of their own.

There are 537 shark species, divided between 8 orders. (You can see examples of different types of sharks on this page: Types Of Sharks)

While some of the best-known sharks (such as the fearsome great white shark and tiger shark) are very large, half of all shark species are less than 3 ft / 1 meter in length.

The smallest shark species, the dwarf lantern shark, can fit in the palm of your hand!

They may be large, but both the whale shark and the basking shark are harmless filter feeders that only eat plankton.

Another, smaller, filter feeding shark is the megamouth shark, a species named for its huge mouth.

With the exception of the filter feeding sharks, most sharks are active hunters of prey.

Sharks mainly prey on smaller fish, and on invertebrates such as shellfish, squid and octopuses.

Large sharks such as the great white shark also eat marine mammals such as seals and dolphins, and even whales.

Research has shown sharks can go up to six weeks without a meal! However, the record for shark fasting belongs to the swell shark. This eastern Pacific species has been observed to go without food for 15 months!

Some shark species prefer to live alone, while others live in groups.

Baby sharks are known as pups.

There are three different ways in which sharks reproduce: oviparity, ovoviviparity and viviparity:

The pups of ovoviviparous sharks feed on unfertilized eggs while still inside their mother. Sand tiger shark pups will also feed on their un-hatched siblings! This is known as intrauterine cannibalism.

There are more than 500 species of shark. Although they vary greatly in size, diet, and behavior, there are certain things all sharks have in common…

Sharks have from five to seven gill slits (most sharks have five), which are uncovered and located on either side of the head.

By comparison, the gills of most bony fishes are covered, with just one opening on either side of the head. (A good way to tell if a fish is a shark or not is by looking at its gills.)

Sharks typically have tough skin that is dull grey in color and covered with hard, tooth-like scales.

Most sharks have eight fins.

Sharks lack a swim bladder (the organ with which most other fish control their buoyancy).

Having cartilage instead of true bones, together with a large liver, provides sharks with some buoyancy. However, most sharks rely on the lift provided by water passing over their pectoral fins to keep them at the right depth.

This means that a shark has to keep swimming in order to prevent itself from sinking, using its pectoral fins like the wings of a plane.

Most shark species have pointed snouts that house several rows of sharp triangular teeth. Sharks lose and replace thousands of teeth in their lifetimes.

Not all shark teeth are the same. Some sharks have pointed teeth for grabbing fish. Sharks whose diets consist mainly of shellfish have flatter teeth for breaking open shells. Some sharks have razor-sharp teeth that are used to tear chunks of flesh out of their prey, allowing them to target larger animals.

In some shark species the skin of the female is thicker than that of the male because biting is part of the male’s courtship routine!

Are Sharks Warm or Cold-Blooded?

Most sharks are cold-blooded. (A cold-blooded animal has no means of regulating its own body temperature.)

A small number of sharks, including the great white, generate their own heat and could be said to be warm-blooded. This heat increase may allow the sharks’ muscles to work more efficiently, therefore increasing their swimming speed while hunting.

Sharks are said to have six, seven, or even eight senses!

Like humans, sharks can hear, smell, see, touch, and taste.

In addition, sharks have a lateral line (organs running along the side of the body which are used to sense movement), pit organs (small holes under the scales which are thought to detect water currents), and ampullae of Lorenzini.

Sharks have excellent eyesight. Like humans, they can see color. They can also see in the dark.

Sharks have an ultra-acute sense of smell, and are able to detect blood over great distances.

The sense of smell of some shark species is so great that they can detect just one-part blood to over a million parts of water. That’s one teaspoon of blood in a regular-sized swimming pool!

Sharks And Their Relationship With Humans

Sharks are supreme marine predators which have evolved to prey on most other animals that enter their marine habitat.

For this reason, sharks are rightly considered a threat to humans. Sadly, this has resulted in sharks being persecuted in several parts of the world.

While sharks should be treated with respect, and caution should be observed in areas in which sharks are known to be present, it’s worth remembering that you’re more likely to be struck by lightning than being bitten by a shark!

In terms of fatalities, the most dangerous shark is the great white shark, followed by the tiger shark, bull shark, blue shark and oceanic whitetip shark. The first three of these are responsible for the majority of fatal shark attacks on humans.

Sharks have a long history on our planet, having inhabited the oceans for over 400 million years – long before dinosaurs appeared. They are one of the earliest known jawed fishes.

Fossil records suggest that over 3,000 shark species have come and gone since the first appearance of sharks all those years ago.

Because a shark’s skeleton is made of cartilage, there are no complete shark fossils, but researchers have been able to find fossilized shark scales and teeth.

At the start of the Jurassic period, approximately 213 million years ago, sharks with flexible jaws started to appear.

Megalodon was the largest shark that ever lived. This fearsome prehistoric shark dominated the oceans twenty million years ago.

Megalodon is a distant relative of today’s great white shark. It was much larger than the great white shark, measuring a whopping 50 to 50 feet / 15 to 18 meters in length and weighing more than 25 tonnes!

Scientists are not sure exactly why megalodon went extinct. One suggestion is that climate change may have impacted the availability of food for the shark.

Modern sharks appeared in the Early Jurassic epoch, between 201.3 million and 174.1 million years ago.

The youngest living group of sharks is thought to be the hammerhead sharks. Molecular data suggests that they appeared during the Neogene – which began 23 million years ago.

Coastal development, including the destruction of mangroves and coral reefs, is a threat to many shark species, as they use these areas for hunting, breeding, and protecting their young.

A rise in water temperatures has also contributed to decreasing shark populations, as the warmer water leads to changes in prey abundance and distribution.

Plastic pollution can cause entanglement. Plastic particles are also ingested, in particular by filter feeders such as whale sharks which are known to swallow thousands of pieces of plastic per day.

Large-scale fishing operations are also a threat to shark populations. Sharks are often caught as fishing by-catch, which means they are caught accidentally by fishermen targeting other species.

Sharks are also deliberately caught for their fins, which are a delicacy in some Asian countries. Shark fins are often removed while the shark is still alive, with the shark being thrown back in the water to die from its injuries.

An estimated 100 million sharks are killed by fisheries every year.

Populations of shark have decreased by 90% since large-scale fishing began. 143 species are currently listed by the IUCN as being under threat, with a conservation status from vulnerable to critically endangered.

You can discover more fun facts on sharks and other ocean animals on the following pages: