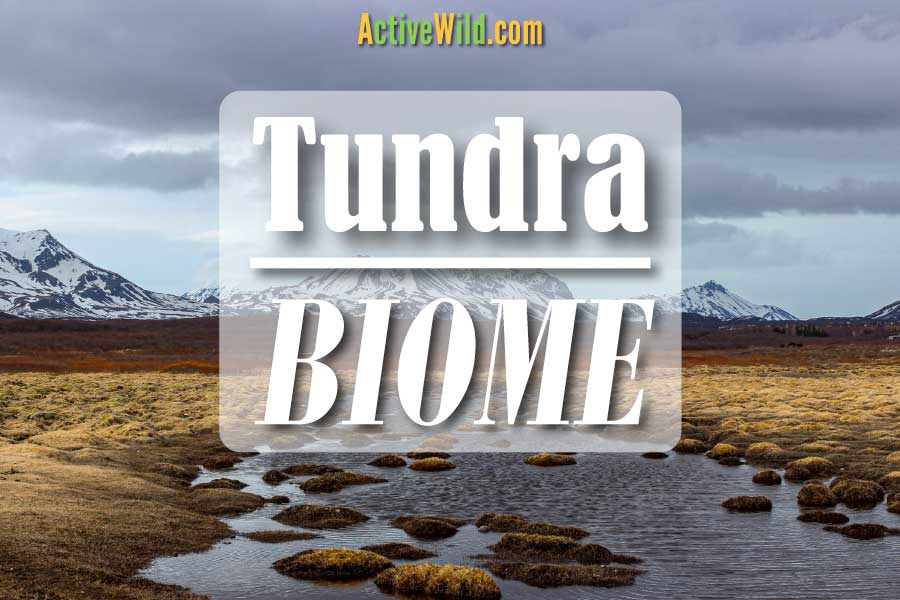 A frozen land in which few trees grow and whose animal inhabitants must have special adaptations in order to survive. Welcome to the tundra, the world’s coldest, most unforgiving biome…

What Is The Tundra Biome?

The tundra biome is a region in which freezing temperatures and scarce rainfall make the growth of vegetation almost impossible.  The tundra is characterised by a total lack of trees and has, instead, stubby vegetation that grows very slowly.

Tundra soil undergoes continuous cycles of freezing and thawing, which adds to the hardships faced by plants in these regions.  In winter, the ground is covered by snow, and in summer, there may be a permanently frozen layer – known as permafrost – just below the surface of the soil.

These harsh conditions make the tundra one of the coldest, most extreme biomes on earth. Any plants or animals that do manage to live in tundra regions must have special adaptations to enable them to survive; this is one reason why tundra biomes are so interesting to biologists.

Where Is The Tundra Biome Located?

Tundra biomes are distributed throughout the world and make up a total of about 10 percent of the earth’s land area. They are divided into three categories, based on their location.

The dominating climatic factor in tundra regions is the extreme cold. In winter the ground is covered by snow, and in summer, although the snow may melt, a permafrost may remain; this is a permanent layer of ice just below the surface of the soil.

Permafrost layers are characteristic of Arctic and Antarctic tundras.  In addition to the frigid conditions, rainfall is scarce in tundra biomes – so scarce, in fact, that tundras can be thought of as frozen deserts.

These inhospitable factors prevent plants from growing deep roots and explain why tundras are characteristically treeless.

In Arctic and Antarctic tundras the winters are dark and long, and there is little light for photosynthesis (the process whereby plants use sunlight energy to make food).

The summers may well provide long days of sunlight, but they only last for a few months. Alpine tundras experience frequent high winds that can bring blizzards and white-outs, which also reduce the incidence of light and prevent photosynthesis.

Life In The Tundra Biome

Despite the extreme climatic factors found in tundra biomes, there is an array of unique species that are supremely adapted to survive the seemingly impossible conditions.

The species diversity is rather low (there are not many different species that can cope with the extremes) but, within each species, the populations can be quite large.

Some of the species are endemic to tundra habitats, meaning that they occur nowhere else on earth.  This makes the tundra biome important in terms of world biodiversity.

Plants that grow on the tundra always hug the ground; they usually clump together in hollows or behind rocks, to avoid the harshest winds and blizzards. They are adapted to photosynthesise in cold temperatures and low light intensities, and have shallow roots because only the uppermost layer of soil is available for growth, the lower layers often being frozen.

Different types of plants in the Arctic and Antarctic tundra include low growing bushes, heaths, grasses and sedges.  There are also hundreds of species of more primitive plants, such as mosses and liverworts, all of which extend only a fraction above the surface of the soil or rock upon which they grow.

In addition, lichens are present and form an important food for herbivores; lichens are not true plants, but are formed through a symbiotic relationship between algal and fungal species.

Because of the high latitudes in which these hardy plants grow, they spend most of their lives in the dark. Winters last for many months and, in some places, the sun does not rise above the horizon at all. This means that the plants have little access to the sunlight they need for growth.

When summer comes, the days are long; in places the sun doesn’t set for weeks and the plants have a chance to photosynthesise all day and all ‘night’. They flower in abundance! Summer is thus a time of rapid growth and productivity for Arctic and Antarctic tundra plants.

Plants in the Alpine tundra also include low bushes, heaths, grasses, sedges, mosses and lichens. Here, on the high mountains, there is a lot of sunlight, and plants can photosynthesise more easily.

Although there is no permafrost layer, the exposure, cold temperatures, snow, ice and dry winds, make plant growth very slow. Alpine plants are adapted to the conditions by having low growth forms and small leaves (so that they don’t lose water easily).

Alpine tundras are distributed all over the world, and there is no single animal species that is characteristic.  In each geographical area, the high mountains are home to several different herbivores, as well as a few carnivores.

Tundra carnivores include wolves, bears and birds of prey, such as falcons.

The Antarctic tundra does not support any large mammals, and the small ones, such as mice, rats and cats, have been introduced inadvertently. Areas of Antarctic tundra are often used for nesting and breeding by seabirds (e.g. albatrosses and penguins), and as resting places for marine mammals, such as seals.  All these animals depend on the ocean for their food and are not strictly part of the tundra food webs.

Arctic tundra animal biodiversity is relatively low, with around 48 species of mammals and no amphibians or reptiles inhabiting the biome.  The mammals include large herbivores, such as caribou (reindeer) and musk oxen, as well as smaller herbivores, like Arctic hares, lemmings and voles. The diversity of carnivores is also low, with Arctic foxes and snowy owls being more common, and polar bears occurring only close to the ocean.

Very few bird species are able to live all year round on the tundra; snowy owls, ravens and ptarmigans are among those that remain in the Arctic.  Ptarmigans undergo a spectacular molt and change to a white winter plumage, in order to be camouflaged against the snow.

When springtime comes to the Arctic tundra, however, it becomes a temporary home to millions upon millions of migratory birds that arrive from all over the world.  The frozen lands become filled with the wingbeats and calls of swans, geese, terns, ducks, shorebirds and songbirds. They come at a time when the tundra vegetation is at its most productive, and they come to lay their eggs, raise their chicks, and build up enough fat reserves to fly all the way back to their more southerly homes.

It does seem paradoxical that these birds find enough food in the seemingly barren tundra to make their epic journeys worthwhile. The key seems to be that the warmer summer temperatures melt the surface layers of soil and, because the permafrost remains frozen underneath, the melt water cannot drain away.  Instead, it forms marshes and lakes, ideal habitat for insects such as flies and mosquitoes to breed.  These insects, along with the marsh vegetation, form the vital food that the migratory birds and their chicks feed upon.

Threats to The Tundra Biome

Global warming has already begun to change conditions in Arctic and Antarctic regions, where ice and snow are melting more rapidly, and in some Alpine regions, where high mountain peaks are losing their snowy caps.

When permafrost melts, it releases carbon dioxide and methane from the decay of organic matter in the soil.  These are greenhouse gases that are associated with more global warming.

Along with warmer conditions, tundra plants are changing, with shrubs and bushes replacing the lichens that are crucial food for caribou.

Studies have shown that the numbers of migratory shorebirds arriving on the Arctic tundra have decreased, whereas the numbers of waterfowl have increased.  Shorebirds feed on insects, but waterfowl are grazers; this means that there will be different pressures on the tundra ecosystem and this could harm other species.

Tundra ecosystems are fragile and they depend on cycles of freezing and thawing. The species of plants and animals that exist in these biomes are specialized for the extreme conditions, but are also clinging to existence.  Any changes in the conditions may bring extinction to these species.

Nunez, C. (2019) What are Tundras? National Geographic. Accessed on 3 August 2020, from https://www.nationalgeographic.com/environment/habitats/tundra-biome/