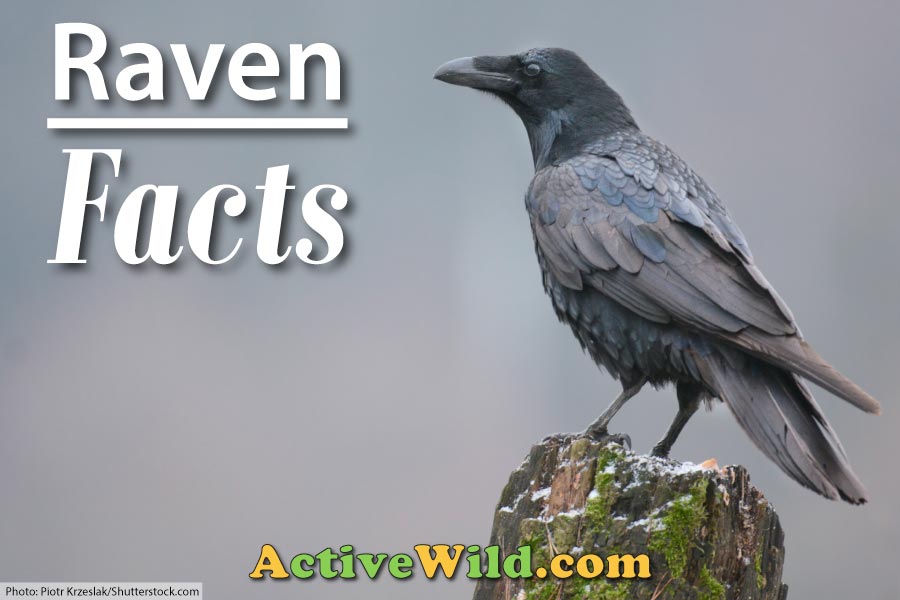 Raven bird facts, pictures and information. Get the lowdown on this intelligent, adaptable bird.

The common raven (usually known simply as ‘the raven’) is the largest member of the crow family, Corvidae. The species has one of the largest ranges (the area in which it is found) of any bird, and is found in a variety of habitats across much of the northern hemisphere.

Known for its high intelligence, the raven makes frequent appearances in the myths and legends of the peoples with which it shares its large range.

Let’s find out more about this fascinating bird…

Raven Facts At A Glance 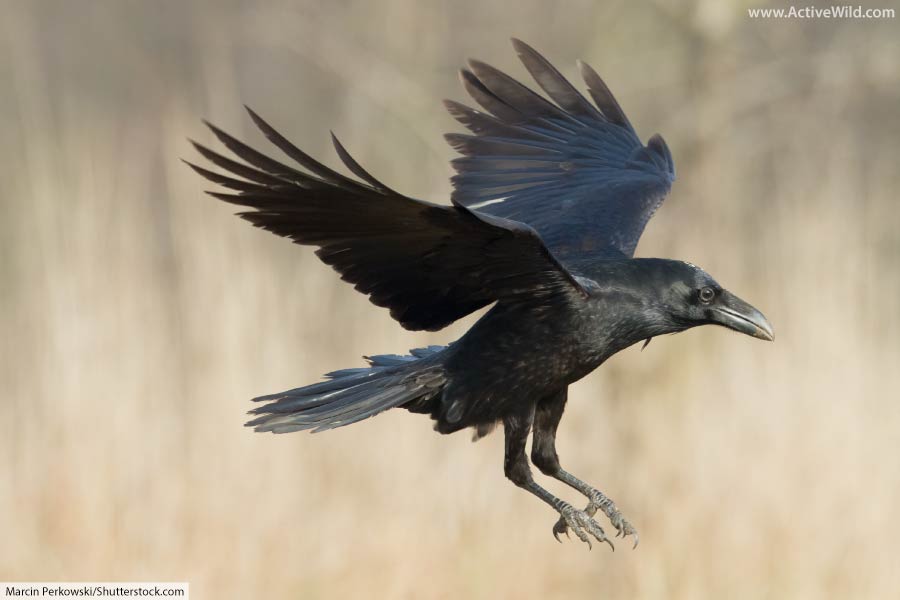 What Is A Raven? 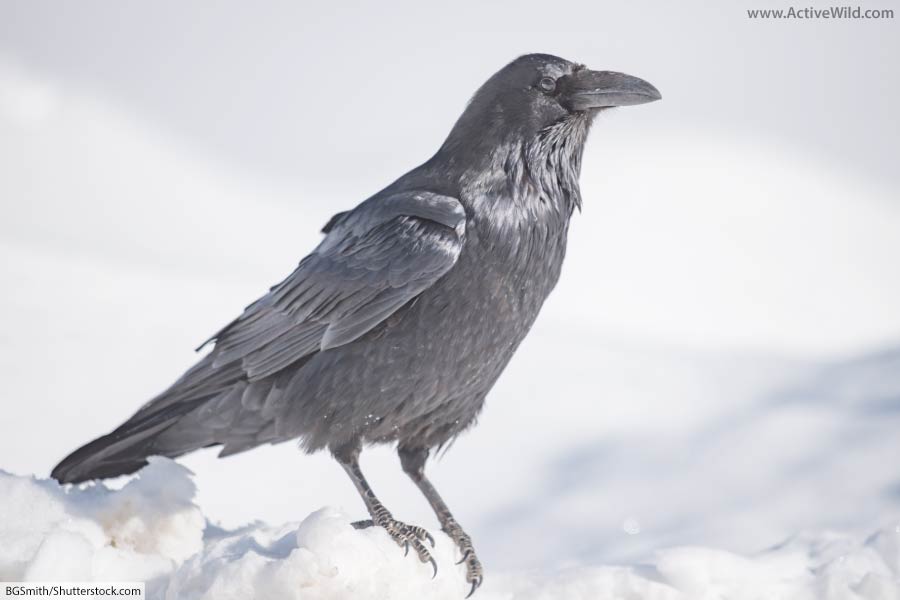 A raven is a large black bird in the genus Corvus, which is part of the crow family, Corvidae. Members of this family are known as ‘corvids’.

Although there are nine species of raven, the word ‘raven’ is most often used to refer to the common raven, Corvus corax.

(Unless specified, on this page, whenever we talk about a raven, we mean the common raven.)

The common raven is the most widely-distributed, and the (joint) largest of all the corvids. (The thick-billed raven, a species found in eastern Africa, is a similar size.)

Largest of its kind

Passerines are also known as ‘perching birds’, or ‘song birds’. They make up over half of all living bird species.

All nine raven species are members of the genus Corvus. Corvus also contains the world’s crows and the two species of jackdaw (although these are sometimes placed in a separate genus, Coloeus).

Other members of the crow family (that aren’t in the genus Corvus) include magpies, choughs and nutcrackers.

The common raven’s closest relatives are the brown-necked raven and the pied crow, both of which are found in Africa, and the Chihuahuan raven, which is found in the United States and Mexico.

How To Identify A Raven 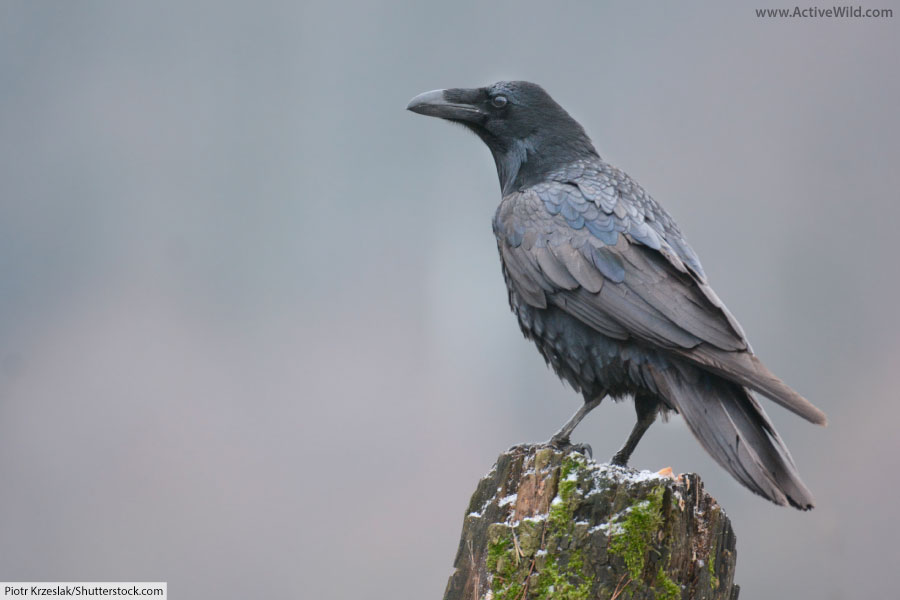 A raven’s plumage can appear to have a glossy, green or blue sheen. Its bill is large and powerful, with bristles that reach about half-way along its upper side. The chin feathers are shaggy and often prominent.

When in flight, the common raven’s tail is diamond, or ‘wedge’-shaped. Its wings are long and relatively narrow. Finger-like feathers may be seen at the tips of the wings.

When seen together, the size difference between a crow and a raven is often enough to provide a definite id. If this is not apparent, look out for the raven’s heavy bill and shaggy chin feathers.

In flight, the raven soars far more frequently than crows. It also engages in aerial acrobatics such as dives and rolls. If you see either of these behaviors, together with the diamond-shaped tail feathers, chances are you’re looking at a raven.

Where Are Ravens Found?

The common raven is found throughout the Northern Hemisphere. It lives as far north as the Arctic, and as far south as southern Mexico.

Although the raven is found over a wide area, the species is not migratory. Only birds found in the far north of the species’ range will move south during the winter.

The common raven lives in a wide range of habitats. It is commonly associated with coastal habitats, particularly sea cliffs, as well as with upland habitats such as moors and mountains. The raven is present at high altitudes in the Himalayas, and even lives on Mount Everest.

This adaptable species also makes its home in forests and open countryside. Although it is often found in wilderness areas, the raven will also live near humans in rural areas.

What Do Ravens Eat?

Like most crows, the raven is omnivorous. It is a predator, a scavenger and a forager. In fact, the species will eat just about anything, from seeds to carrion.

Ravens are known to eat fruit, nuts, grain, bird eggs, human garbage, dung, worms and arthropods such as scorpions, beetles and other insects.

The species will also predate small vertebrates, including mammals such as mice, the fledglings of other birds, reptiles and amphibians.

The world population of common ravens currently consists of over 16 million individuals, a number which is thought to be increasing. The species has a conservation status of ‘Least Concern’, and is not currently threatened.

The success of the common raven may not be such good news for a number of less-fortunate animals; the raven is known to predate the eggs and young of threatened species such as marbled murrelets, desert tortoises, and California condors.

Ravens In Myths And Legends 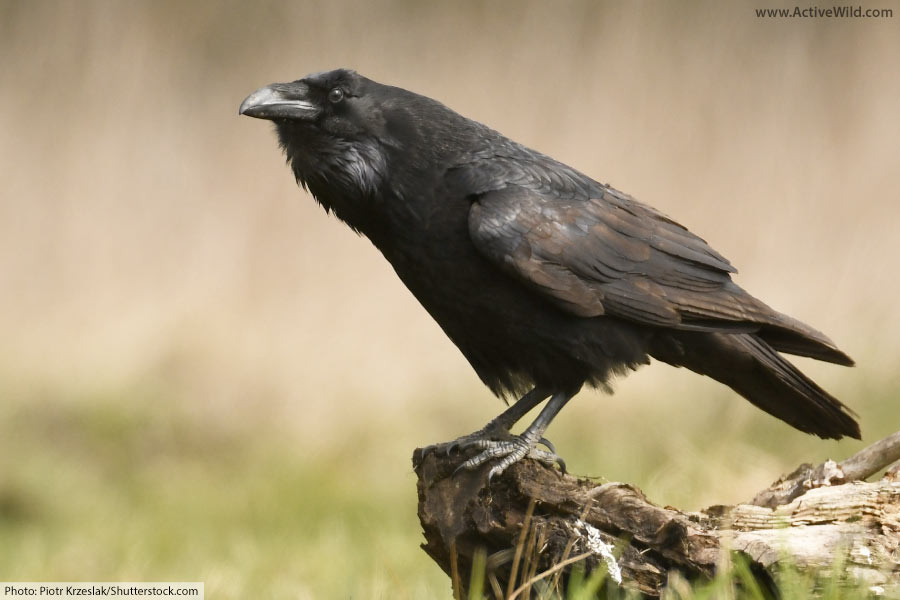 Perhaps due to its large size and somewhat sinister appearance, the raven has found its way into the myths and legends of many cultures.

In Norse mythology, the ravens Huginn and Muninn (thought and memory) sit one on each shoulder of the god Odin, and supply him with news and information.

Several First Nations peoples know the bird as a powerful trickster. Others know it as a creator. The bird appears on the crests and artwork of many indigenous North American tribes.

In England, it is said that if the small raven colony present in the Tower of London were to leave, then the country would fall to an invader.

A raven can remember not only its own place in the system, but also the relationship between other ravens. A raven will show discomfort if other familiar ravens do not behave in the expected manner towards one another.

Ravens are among the small number of animals that are able to communicate to each other about things that are not present. (This is known as displacement).

For example, upon finding carrion being guarded by a pair of older ravens, a young raven has been observed returning to its roost and telling the others about the find. The next day, the flock flew to the carrion together to see off the older pair and claim the carrion for themselves.

Ravens also demonstrate problem-solving abilities, tool use, and are even known to ‘play’ – partaking in activities purely for enjoyment (a behavior seen only in intelligent animals).

After spending the first few years of their lives with a flock of other subadult birds, ravens form mating pairs which from then on are rarely apart. Living as a pair is advantageous for foraging, detecting predators, territorial defense, raising offspring and companionship.

The common raven has a lifespan of up to 21 years in the wild, and over 40 years in captivity, making it one of the longest-lived of all birds.

Over To You: Have You Seen A Raven?

Are you lucky enough to have seen a raven in the wild? Perhaps you live in an area in which they are common? Let us know your raven observations and experiences in the comments section below!