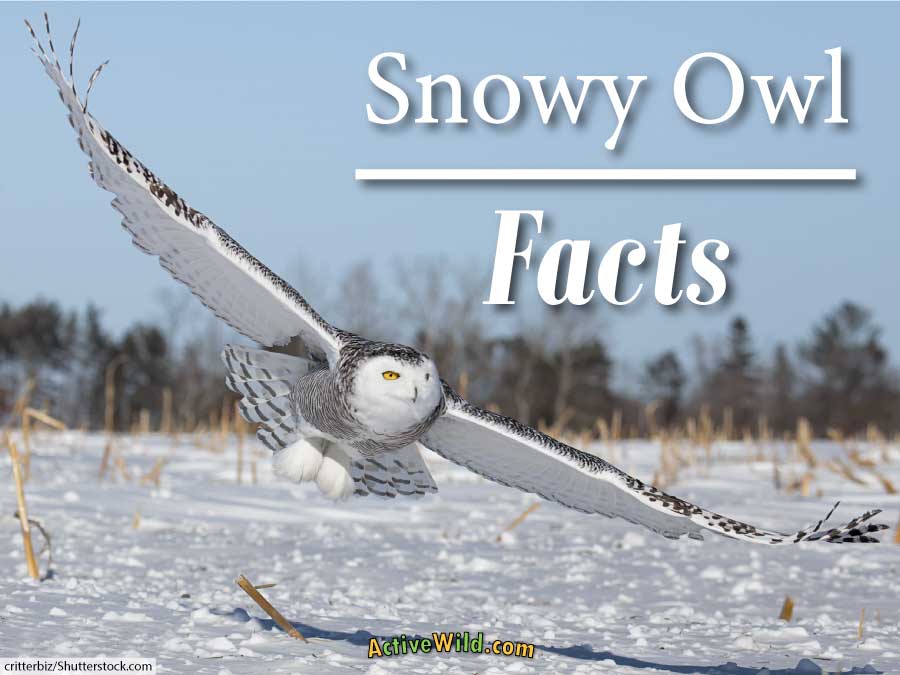 All About Snowy Owls: Meet A Distinctive Arctic Predator

The snowy owl is a large white owl that lives in the Arctic tundra of North America, Europe and Asia. Its thick, white plumage and feather-covered feet are adaptations for living in the Arctic Circle.

Every few years, when food becomes scarce in the Arctic, large numbers of snowy owls migrate southwards. During these times, this Arctic bird can be seen as far south as Florida!

Snowy Owl Facts At A Glance

The snowy owl is a large white owl with yellow eyes and a black beak. Adult males are almost pure white (occasionally with a few, scattered dark spots), while the plumage of adult females is marked with a number of dark bars and spots. Juvenile birds of both sexes resemble adult females, but are smaller and are more densely marked.

When snowy owls are spotted further south of their usual range they often seem unafraid of humans, perching conspicuously on buildings, fences, posts or even on the ground.

Snowy owls tend to fly close to the ground.

How Big Is A Snowy Owl?

Where Do Snowy Owls Live?

The area in which the snowy owl is found is extremely large; the species is present in Arctic regions of North America (including Alaska, Canada and Greenland), Europe (Scandinavia and Russia), and Asia (Siberia).

The snowy owl is largely nomadic, moving to areas in which prey is abundant.

During the winter snowy owls move south, and may be seen in the northern contiguous United States, northern Europe and northern Asia.

The snowy owl has a close relationship with its main prey, the lemming. Lemming populations are prone to wide fluctuations, with booms and dramatic drops both occurring naturally. These fluctuations have a knock-on effect on the snowy owl.

In some years, the lemming population can collapse, leading large numbers of snowy owls (often juveniles) to make their way south.

During these irruptions (in nature, an ‘irruption’ is a sudden increase in a species’ population), snowy owls may be seen as far south as California, Colorado, Kentucky, Virginia, and even (very) occasionally in Florida!

The snowy owl is at home on the Arctic tundra – a cold, barren habitat in which the subsoil is permanently frozen, causing limited tree growth. During the winter, the owl can be found in a wider range of habitats, including marshes, fields, and on the shores of lakes and the ocean.

Only in Norway, where lemmings are found at higher elevations, are snowy owls found in mountainous regions.

Snowy Owls In The Wild

The snowy owl builds its nest on the ground. The nest consists of little more than a shallow hollow scraped out by the female. It is usually situated in a position that offers good visibility over the surrounding area, such as a piece of raised ground or on a mound, ridge or boulder.

Female snowy owls lay from 3 to 11 eggs. The number of eggs laid (and chicks fledging) increases when prey is readily available. The male hunts for food while the female incubates the eggs. This takes around 31 – 33 days.

The young leave the nest around 2 to 3 weeks after hatching, but continue to be fed and guarded by their parents for 10 weeks or more.

Unlike most other owls, the snowy owl often hunts by day as well as by night (in the high Arctic it can be light for 24 hours). The owl is an opportunistic hunter, capturing any prey that is readily available.

The owl usually hunts from a perch, surveying its surroundings until a suitable prey animal comes into view. The owl can take prey on the ground or capture flying prey in mid-air. It will also catch fish swimming close to the surface of the water.

What Do Snowy Owls Eat?

The diet of a snowy owl consists of a wide range of small to medium-sized animals, including mammals, birds and fish. Lemmings and other small rodents such as voles and mice make up the majority of the owl’s diet, particularly in the summer when these animals are most abundant.

The owl will also eat a variety of other small to medium-sized mammals, including rabbits, hares, muskrats and ground squirrels.

Juvenile ptarmigan feature heavily in the owl’s diet during the species’ breeding season. Other birds taken by the snowy owl include: ducks, geese and murrelets.

The snowy owl is large and well-armed, and has few predators of its own. Despite this, a snowy owl nest and recently-fledged juvenile birds make tempting targets for Arctic predators such as the Arctic fox and the gray wolf.

Birds likely to attack the nest and/or juvenile snowy owls include ravens and jaegers (skuas).

The conservation status of the snowy owl is ‘Vulnerable’ (source). There are an estimated 28,000 adult snowy owls in the wild, and the population is decreasing. Threats to the snowy owl include hunting, starvation, plane strikes, vehicle collisions, and climate change.

You can find out more about the snowy owl and other animals on these pages: