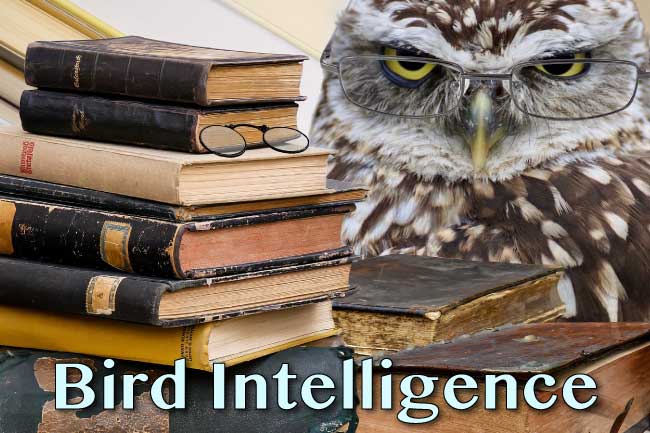 How intelligent are birds? A look at bird intelligence, with facts and examples of smart birds…

How Intelligent Are Birds?

If asked to make a list of intelligent animals, most people would include species such as dolphins and chimpanzees. Birds probably wouldn’t get a look-in.

However, a growing number of studies are challenging the traditional view that birds are, well, “bird brained”.

In fact, as we find out more about bird intelligence, the more we are beginning to realize that certain groups of birds are among the most intelligent of all animals.

On this page, we take a look at bird intelligence, and attempt to answer the question “how intelligent are birds?”

Bird Intelligence: A Bird’s Brain Vs A Mammal’s Brain

Today, birds and mammals are very different types of animal. However, the basic “body plan” of both–i.e. having a backbone, four limbs, eyes, ears, a skull containing a brain, etc.–reveals their shared ancestry.

Bird and mammal brains too share the same basic parts. However, 300 million years of evolution have left their brains–like their bodies–looking very different.

A bird’s brain is mostly smooth, and lacks the bumps and grooves of a mammalian brain.

The brains of crows and parrots – two of the smartest types of bird – are, in relation to body size, as large as those of the great apes.

However, evolution has prevented bird brains from getting too big; if birds had big brains then they would never have been able to fly! (Even flightless birds such as ostriches are descended from birds that could fly.)

Unlike birds, mammals (other than bats) never needed to worry about having to fly. This is the reason mammals tend to have larger brains than birds.

Although brain size is a reasonably good indicator of intelligence, it doesn’t necessarily follow that ‘the bigger the brain, the higher the intelligence’.

The smartest birds – even with their small brains – are more intelligent than most mammals.

A bird’s brain may be small, but it is highly efficient. Research has shown that the cells in a bird’s brain are extremely densely-packed. A parrot’s brain has the same number of neurons (brain cells) as that of a medium-sized primate.

Numerous tests have been devised to measure animal intelligence. Despite having small brains, crows and parrots take their place alongside great apes, dolphins and whales as the most intelligent of all animals.

Birds are capable of impressive feats. For example, a homing pigeon can find its way home from thousands of miles away, and the superb lyrebird is an excellent mimic of both natural and man-made sounds. Both of these feats require the ability to learn and store information. However, they don’t necessarily require intelligence.

An intelligent animal is able to take the information that it has learned and apply it in a different situation. For example, a bird may learn how to say human words, but only an intelligent bird would know what those words mean.

The African grey parrot is capable of learning over 200 words. More importantly, research has shown that some African grey parrots understand the meaning of the words they’ve been taught. The species can also be trained to recognize colors, shapes and objects.

A bird may instinctively know that sticks are good for building a nest. An intelligent bird – such as a New Caledonian crow – will realize that a stick can also be used as a tool for removing insects from holes in trees.

Only intelligent animals are able to use tools, as we’ll find out further down the page.

A famous test for self-awareness is the ‘mirror test’, invented in 1970 by US psychologist Gordon Gallup Jr. In the mirror test, a sticker is attached to part of an animal’s body that the animal is unable to see. (In the case of a bird, the sticker is attached onto the throat, underneath the bill.)

The animal is then placed in front of a mirror. The animal passes the test if tries to remove the sticker after seeing it in the mirror. This behavior implies that the animal recognizes its own reflection and is therefore self-aware.

The Eurasian magpie is the only bird so far to have passed the mirror test. It joins an elite group of only a handful of animals that are able to recognize their own reflections.

The magpie’s feat is all the more impressive when you consider that, at 18 months, only 50% of humans can pass the mirror test!

During times when food is plentiful, many birds deliberately store surplus food in multiple locations. By doing so they’ll have a supply of food available during the winter. This behavior is known as ‘caching’.

Caching requires a good memory; there wouldn’t be much point in hiding food if you couldn’t remember where you’d put it!

One species known for its caching behavior is Clark’s nutcracker, a North American member of the crow family Corvidae. It the autumn this incredible bird hides seeds in over 3,000 different locations. It relies on these food stores during the cold months.

Could you remember where you’d left 3,000 objects? I sometimes have trouble finding my keys!

One of the problems with being an intelligent species is that other members of the species are likely to be just as intelligent as you!

Crows will watch their colleagues hiding food, then steal the cache when the other bird’s back is turned.

Thanks to this behavior, crows are intelligent enough to keep an eye on their ‘friends’ when hiding their food. If they feel that they are being watched, crows will recover their food and hide it somewhere else.

Some birds, such as the western scrub jay, even use deception when hiding caching their food. If they think they are being watched when hiding their food, they will re-hide it multiple times in order to confuse the onlooker.

Pigeons, although not the most intelligent of birds, are capable of incredible feats of memory. Pigeons build up a mental map of landmarks in their home environment. Once out of their home range they switch to other navigation methods, such as using a built-in compass, but the memory they hold of their local area is vital for when they return home.

The brain of a hummingbird is the size of a grain of rice. Yet these tiny birds can remember which flowers they’ve recently drained of nectar, and will avoid visiting them again up to an hour later.

Studies show that the rufous hummingbird can learn how long it takes individual species of flower to replenish their supply of nectar. The tiny bird times its visits to certain flower species accordingly.

Tool Use By Birds

When an animal uses an object from its environment (e.g. a stick) and uses it to perform a task (e.g. probing for food behind the bark of a tree), it is said to be using a tool.

Seeing a stick not only as a stick but also as a means of obtaining food requires a great deal of intelligence.

Birds are among the few animals that use tools. Most of the tool-using birds use items such as sticks as ‘probing’ tools; tools that allow them to reach otherwise inaccessible items of food.

One of the best-known examples of a tool-using bird is the woodpecker finch. Found on the Galapagos Islands, this industrious species uses items such as cactus spines and twigs as tools. The items are used to obtain invertebrates from nooks and crannies in trees. Up to 50% of the finch’s food is obtained using tools.

The woodpecker finch is also a toolmaker. This intelligent bird been observed modifying its tools, for example by shortening a stick to make it more manageable.

Another famous tool user and toolmaker is the New Caledonian crow. This species takes toolmaking to another level, by creating tools designed for specific tasks out of raw materials.

The crow makes tools by biting pieces out of tough leaves. The leaf pieces vary in shape depending on what the tool is going to be used for. A long, straight piece is stronger, whereas a tapered piece will be better for probing.

The New Caledonian crow also makes tools out of sticks. If a straight stick isn’t up to the task, the bird will select a suitably-shaped stick and fashion it into a hook.

Green herons catch fish using bait, which may consist of insects, bread, or other objects. These the heron drops onto the surface of the water in order to tempt fish within range of its beak.

The ability to use tools is a good indicator of intelligence. However, the converse is not always true. Very few animals use tools; many have no need – evolution has provided them with all of the tools they’ll ever need.

This is why an animal that doesn’t use tools isn’t necessarily lacking in intelligence – it might simply not need to use them.

Rooks are highly intelligent birds, but they don’t use tools; their beaks are adequate for obtaining all the food they need.

Living in a group provides many benefits for animals. It also requires a degree of intelligence; as well as learning how to work together, social animals have to learn a set of social rules. As a result, animals that live in a group tend to be more intelligent that solitary animals.

One important skill that needs to be learned when living in a group is how to identify other individuals. This is especially important for young chicks who need to be able to identify their parents.

Penguin chicks frequently become separated from their parents. Luckily, they’re able to distinguish the contact calls of their parents from an early age. The parent just has to utter its distinctive call and the chick will come running.

Some birds are known to use teamwork in order to capture prey. Courting pairs of peregrine falcons have been observed hunting cooperatively. The male first separates a pigeon from the flock. The larger female then captures and dispatches the prey.

She’ll usually be the one who eats it too; the prime motivation for both birds is getting her in tip-top condition ready to lay their eggs.

We hope that you have enjoyed learning about bird intelligence. An article such as this can only ever hope to scrape the surface of what is a huge subject area.

It is very clear that for many years we humans have been doing birds a disservice. Birds are not the instinctive, unintelligent animals that we used to take them for. In fact, crows and parrots are among the smartest of animals. So, the next time you see a crow sitting on your lawn, don’t shoo it away; ask it for some help with the crossword!

Other Bird Pages at Active Wild

Discover some of the stars of the bird world: Amazing Birds

Learn why feathers are so important to a bird: Bird Feather Facts