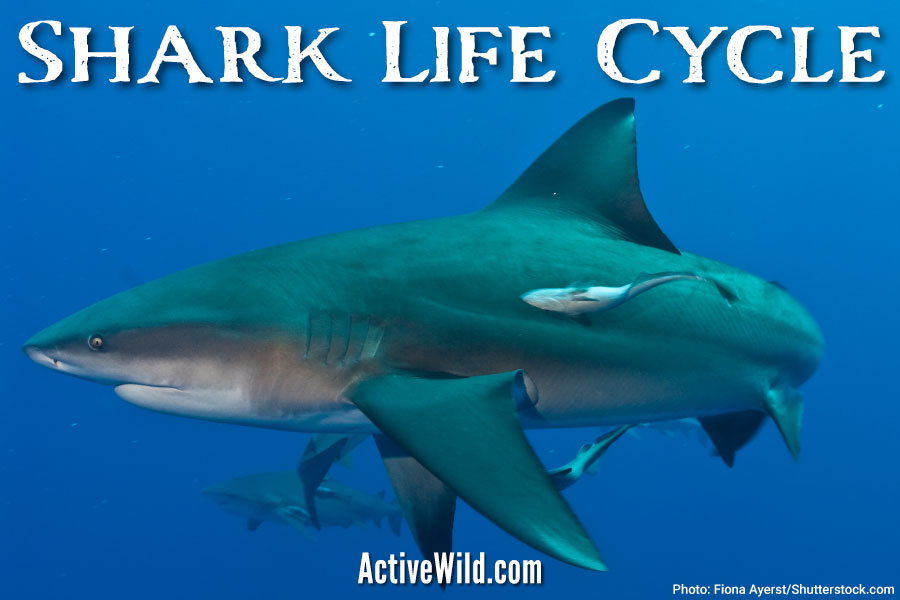 Sharks are highly successful animals. They appeared millions of years before the first mammals and have evolved numerous adaptations for finding and capturing prey. On this page, we take a look at another aspect of a shark’s lifestyle: its life cycle.

The shark life cycle is characterized by long pregnancies, the production of well-developed young in relatively small numbers, and a lengthy period before sexual maturity is reached.

For example, the sand tiger shark Carcharias taurus (also called the grey nurse shark) gives birth to 1m (3.3. ft.) pups, with an average birth rate of under one pup per year.

The gestation period (pregnancy) of the basking shark is over 1 year (possibly up to 2 or 3 years), and individuals only reach sexual maturity at age 6 to 13.

Their slow reproductive rate can leave sharks vulnerable to new threats. This is because, with a long gap between generations, sharks are slow both to adapt to, and to recover from, changes in their environment.

Sharks reproduce sexually, with males fertilizing eggs produced by females. (There are rare cases of asexual reproduction in sharks, with females producing young without mating via parthenogenesis.)

A female shark may release pheromones to signal that she is ready to mate. Male sharks are known to pursue and bite females to initiate mating.

Sharks reproduce using internal fertilization. Sperm is transferred to the female via one of the male shark’s claspers–a pair of appendages positioned behind the pelvic fin. The sperm travel along a groove in the clasper, which is inserted into the female’s cloaca – an opening with shared reproductive and waste functions.

The males of small, flexible sharks such as catsharks wrap themselves around the females while mating. Larger sharks position themselves alongside each other. The male shark may bite the female shark’s pectoral fins to hold her close. 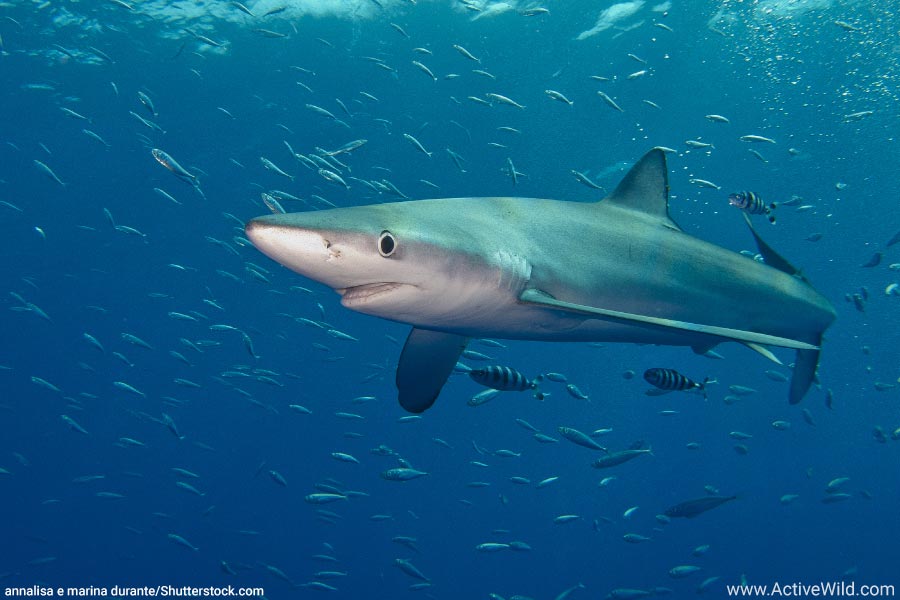 Females of some shark species have thicker skin than the males to prevent injury while mating. Female blue sharks, whose skin is three times as thick as the males’, can be recognized by their scars.

Sharks that give birth to live young are either ovoviviparous or viviparous. Their embryos develop inside the mother’s uterus before being born.

Most sharks are ovoviviparous. The embryos hatch and develop inside the mother’s uterus before being born. Each embryo receives nutrients from a large yolk sac that is attached to its body while it develops.

The embryos of viviparous sharks receive additional nutrients from the mother while in the uterus via an umbilical cord (in a manner similar to that seen in placental mammals) before they are born.

Oviparous sharks lay eggs rather than give birth to live young. Around 25% of shark species are oviparous, laying fertilized eggs that are encased in egg-cases. The egg-cases of egg-laying sharks are often known as “mermaid’s purses”.

Examples of oviparous sharks include: bullhead sharks such as the horn shark and the Port Jackson shark; many species of catshark (some of which, confusingly, are known as dogfish), including small-spotted catsharks, swell sharks, and nursehounds.

Oophagy is seen in several shark species. This is when the first embryos to develop eat the other eggs in the uterus. Some sharks, including the sand tiger shark, also eat their siblings. This behavior is known as “intrauterine cannibalism”.

Compared to bony fish, sharks produce relatively few young. The young of sharks are comparatively well-developed, and therefore more likely to survive to adulthood, than the fry of bony fish.

Sharks are fish that belong to the class Chondrichthyes (a class is a group of related animals). Members of this class are known as “cartilaginous fishes”.

Sharks are not the only members of Chondrichthyes; the group also contains rays, skates, sawfish, and chimeras (fish such as ratfish, ghost sharks, and rabbitfish.)

The skeletons of cartilaginous fish are made of cartilage rather than bone.

Cartilage is a tough, flexible tissue that occurs in animals. If you want to know what cartilage feels like, give the tip of your nose or your ears a wobble; it’s cartilage that gives them that bendy, rubbery feel.

Chondrichthyes (cartilaginous fishes) is one of two large fish groups, the other being Osteichthyes: the “bony fish”.

The vast majority of living fish are bony fish. As the name suggests, the skeletons of bony fish are made of bone.

Both sharks and bony fish reproduce sexually, that is, with males fertilizing eggs produced by females. However, there are differences in the mating strategies of the two groups.

The “scattergun” approach employed by bony fish is the reason that their eggs are often produced in vast quantities. This increases the chances of successful fertilization, but also produces a large amount of waste; only a few of the eggs will get fertilized, and a tiny fraction of the resultant fish will go on to reach adulthood.