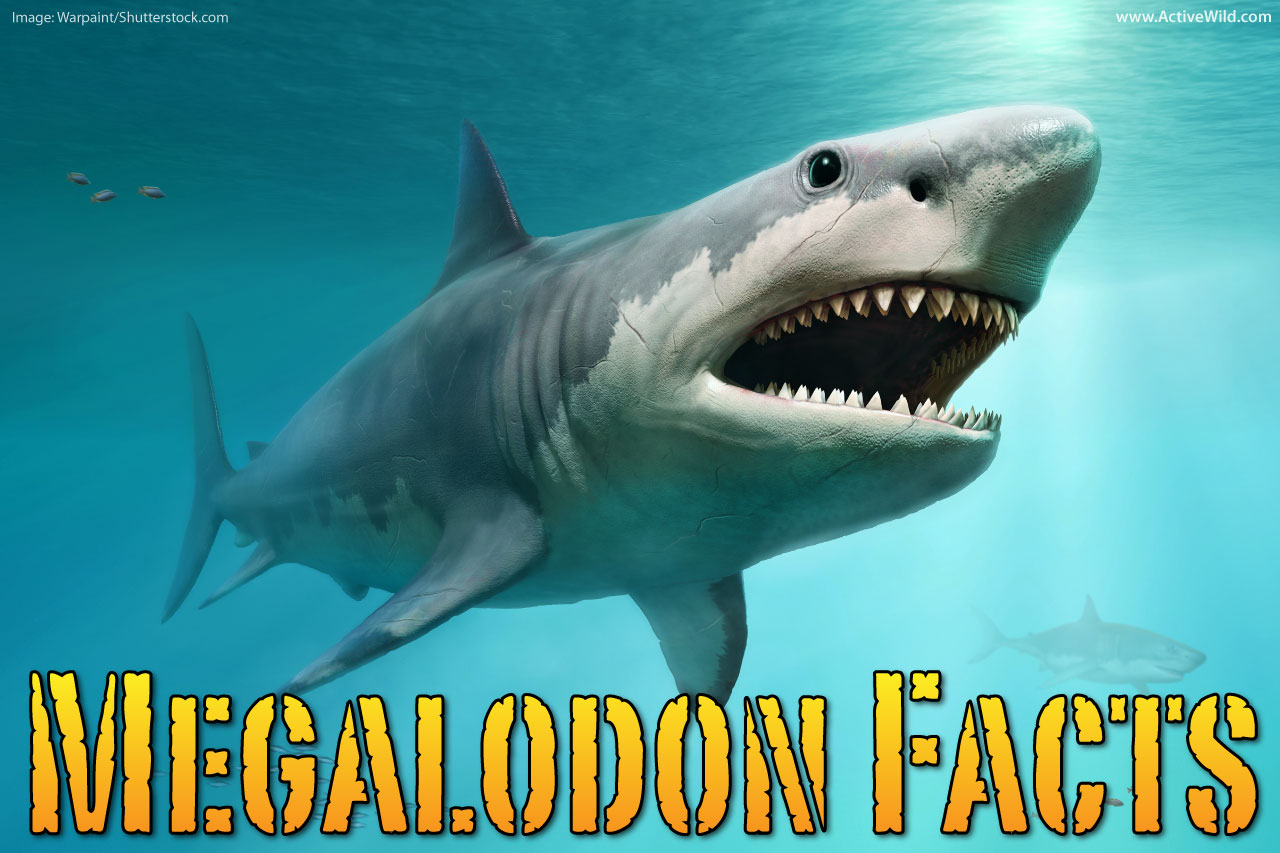 Megalodon facts for kids & adults: pictures & in-depth information on the biggest shark ever to have lived on Earth.

This colossal predator reached an estimated maximum length of around 18 meters (59 ft.); that’s almost one and a half times the length of the whale shark – the world’s largest living fish.

Some scientists believe that this prehistoric giant may have grown even larger!

The megalodon looked much like today’s great white shark, but was far bigger and more powerfully-built. The megalodon’s nose was probably less pointed than that of the great white, and its jaws were wider and flatter.

The megalodon had long pectoral fins to balance its large body as it moved through the water. (A fish’s pectoral fins are the fins on either side of its body just behind the head.)

How Big Was Megalodon?

Some estimates suggest that the megalodon may have reached a maximum length of 25 meters (82 ft.), although the current consensus is that the maximum length is more likely to have been (a still impressive) 18 meters (59 ft.).

The average size of a megalodon was likely to have been around 10.5 meters (34 ft.), with the species possibly reaching different sizes depending on where in the world it was found.

By comparison, the largest recorded great white shark was ‘only’ around 7 meters long (23 feet).

The megalodon is thought to be the largest fish ever to have existed.

Paleontologists (scientists who study prehistoric life) are able to estimate the size of the megalodon by comparing the sizes of fossilized megalodon teeth and vertebrae to those of living sharks.

In living species of shark, tooth width and body length have been found to correlate. Scientists can therefore estimate the size of the megalodon based on the width of its teeth.

The largest megalodon tooth ever to have been discovered is 18.4 centimeters (7.25 in) in length: that’s almost three times longer than a great white shark’s tooth.

The megalodon gets its name from its oversize teeth: megalodon can be translated as ‘large tooth’.

There is some confusion over the megalodon’s relationship with modern species. It was once thought to be closely related to the great white shark Carcharodon carcharias, and was originally put in the same genus and family, Charcharodon and Lamnidae respectively. This gave the megalodon the scientific name Charcharocles megalodon.

However, after comparison of megalodon teeth to those of other shark species, most scientists now believe that it is more closely related to another extinct shark, Otodus obliquus, and a member of the genus Otodus and family Otodontidae. Therefore, the megalodon’s (current) scientific is Otodus megalodon.

Both the family Lamnidae and the family Otodontidae are in the order Lamniformes, which contains many living sharks. Members of Lamniformes are known as ‘mackerel sharks’.

The ancestor of the great white shark is now believed to have lived alongside megalodon. The two types of shark may even have been competitors for food.

When Did Megalodon Live?

The megalodon lived during the Miocene and Pliocene epochs of the Neogene Period. It is thought to have appeared around 15.9 Mya in the Middle Miocene, and to have become extinct around 2.6 Mya at the end of the Pliocene Epoch.

Some scientists believe that the Megalodon appeared even earlier, around 23 Mya – at the start of the Miocene epoch.

Why Did The Megalodon Become Extinct?

In the Early Miocene the climate was fairly warm. However, around 14 Mya, an event known as the Middle Miocene Climate Transition saw global temperatures take a sudden dive. There was another drop in temperature 8 Mya, and temperatures continued to fall during the Pliocene Epoch.

Global cooling is thought to have caused – either directly or indirectly – the extinction of the megalodon:

Where Did Megalodon Live?

The megalodon was found all around the world. Its teeth have discovered in Africa, North America, South America, India, Australia, Japan and Europe. The only continent on which they have not been found is Antarctica.

A number of megalodon fossils have been found in areas of high elevation. This indicates that these areas were underwater when megalodon was alive, and that the climate must have changed considerably since megalodon since the fossils were deposited.

Based on the reproductive methods of living mackerel sharks, the megalodon is believed to have given birth to fully developed live young, via a process known as ovoviviparity.

In ovoviviparity, the eggs hatch inside the mother, and the embryos continue their development inside the mother before being born. In living mackerel sharks, the first embryos to hatch will actually eat the other eggs – a system known as oophagy.

The megalodon possessed the large serrated teeth of a meat eater. Due to its colossal size, it would have had to eat large amounts of food. Its diet would likely have included large marine animals such as whales, large fish, and possibly other sharks.

This is supported by the discovery of fossilized whale bones in which marks from megalodon teeth are clearly visible.

The tips of megalodon teeth have even been found embedded within fossilized whale bone. Perhaps they broke off during a particularly ferocious attack or feeding frenzy.

Smaller marine animals like dolphins, seals and large sea turtles would probably also have been part of the megalodon’s diet.

An adult megalodon wouldn’t have been choosy; this huge animal would have had to consume over a ton of food every day in order to sustain itself.

Because of its enormous size, the megalodon is believed to have been an apex predator in the marine ecosystem. With no natural predators, its only likely threat would have come from other megalodons.

(An apex predator is an animal at the top of the food chain, with no known predators.)

A shark’s skeleton is made of cartilage – the soft tissue that makes up our nose and ears – rather than of bone. This means that a shark’s body usually disintegrates too fast for fossilization to occur.

A shark’s teeth, however, are made of dentin. Dentin is a hard, calcified tissue, even harder and denser than bone. This is further surrounded by a hard enamel shell.

As a result, teeth take much longer than cartilage to decompose, and will fossilize.

As a shark sheds its teeth continuously throughout its lifetime, shark teeth are among the most commonly-found types of fossil.

Unsurprisingly, by far the most common type of megalodon fossil are teeth. The only other megalodon body parts found are vertebrae (parts of the backbone). Megalodon coprolites (fossilized droppings) have also been discovered.

Because of the large size of megalodon teeth, ancient people believed them to be ‘tongue stones’ – the tongues of ancient serpents.

There is a great deal of speculation over whether or not the megalodon is still alive today (especially since the release of the action movie ‘The Meg’. Over the years a number of people have even claimed to have seen the giant shark.

People who believe that the megalodon is still alive think that it may exist in the deep, unexplored parts of the world’s oceans – such as the Mariana Trench in the Western Pacific. However, most scientists agree that it would be impossible for a living megalodon colony to exist without our knowing about it.

There are a number of reasons why potential megalodon hunters may be disappointed:

11 thoughts on “Megalodon Facts For Kids & Adults: Discover The Biggest Shark That Ever Lived”