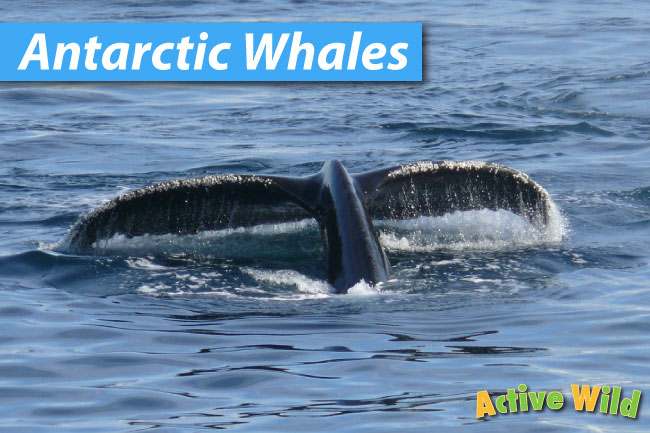 List of Antarctic Whales, with pictures, facts and information. This article is part of our Antarctica series.

Whales are marine mammals. They possess mammalian characteristics such as warm-bloodedness and (females) being able to produce milk.

Whales are members of a group of animals called Cetaceans. Cetaceans include whales, porpoises and dolphins. The Cetaceans’ closest land-based relatives are hippopotamuses.

Many species of whale are found in the Antarctic region. Some spend all of their lives in the cold southern waters. Others visit Antarctica in the summer months to feast on Antarctic Krill, before migrating to the warmer waters of the tropics to breed and give birth to their young.

Let’s find out more about Whales in Antarctica …

The Antarctic Minke Whale is a baleen whale. It is a ‘rorqual’ whale, which means that it has long grooves running along its underside from its throat. It is one of the smaller species of whale and wasn’t targeted by hunters, meaning that its global population is still high.

The video below shows some Antarctic tourists having a close encounter with a Minke Whale!

Beaked Whales are toothed whales. They get their name from their elongated ‘beaks’. Arnoux’s Beaked Whale is one of two species of Giant Beaked Whales.

Most Arnoux’s Beaked Whales are between 9 and 10 m (30 – 32 ft.), although larger specimens have been found. Its front teeth are visible even when its mouth is closed.

The Blue Whale is the largest animal ever to have lived on earth. This huge creature reaches lengths of over 30 m (100 ft.), and weighs up to 160 tons. It is widespread, and found in many parts of the world.

The Dwarf Sperm Whale is the smallest whale. This toothed whale grows to around 2.7 m (9 ft.) in length. It is closely related to the slightly larger Pygmy Sperm Whale, which is also found in Antarctic waters. Both species are most often seen floating motionless at the surface; this behaviour is known as ‘logging’. These rare whales are seldom seen.

The Fin Whale has a sleek, streamlined body which is black or dark grey on the back and sides, and white on the underside. The left side of its jaw is dark, and the right side is white. Like all rorqual whales, it has ridged skin on its throat and chest.

Gray’s beaked whale grows to around 6 m (20 ft.). It is unusual among the beaked whales for having upper teeth. It is a social animals that swims in groups. Groups of Gray’s beaked whale have been known to strand themselves on beaches. It is found all around the Southern Hemisphere, and is seen in Antarctic waters.

The Humpback Whale, as its name suggests, has a humped back, although its most distinctive features are its knobbly head and its long pectoral fins (the whale’s ‘arms’). It is seen in Antarctic waters in the summer, and migrates to warmer waters in the winter. Humpback colonies are also found in the Arctic.

The Long-finned pilot whale grows to just under 6 m (20 ft.) It is a social animal, swimming in groups and often seen spyhopping.

The Orca (also known as the Killer Whale) is a toothed whale and member of the oceanic dolphin family. It is top of the Antarctic food chain, and its prey includes seals, fish and some other whales. This apex predator is found in all of the world’s oceans, not just the Southern Ocean around Antarctica.

The Pygmy Right Whale is the smallest baleen whale. It grows up to 6.5 m (21 ft.) long. It does not have callosities. It was believed to be extinct until one was sighted in 2012. Little is known about the Pygmy right whale.

The Southern Bottlenose Whale is a species of beaked whale. It is thought to be the commonest of the Antarctic whales. It grows to around 7.5 m (25 ft.) and 7,300 kg (16,000 lbs). It has a grey back and sides and a paler underside. It is seen at the Antarctic coast and throughout the Southern Ocean.

The Southern Right Whale is seen around the Antarctic Peninsula. This marine mammal can grow up to 15m (50 ft.), and weigh up to 60 tons. It is a baleen whale; its mouth is equipped with baleen plates that filter its food (mainly krill) from the water. The Southern Right Whale’s ‘callosities’ (areas of thick, white skin) on its head can be used to tell individual whales apart.

The sperm whale has a blunt nose and a small jaw which opens underneath its head. It is a toothed whale, and the world’s largest toothed predator. It dives to over 2 km in pursuit of its favourite prey, squid.

The Strap-toothed whale is a toothed whale. It grows to just over 6 m (20 ft.). Its body is black, with areas of white on the beak and throat. The male strap-toothed whale has a pair of tusk-like teeth that grow out of its mouth and around its jaws. These teeth appear to prevent the jaws from opening more than a few inches. Although usually found north of the Antarctic Convergence, it is occasionally sighted in Atlantic waters.

We hope that you enjoyed learning about whales in Antarctica. If you want to find out more about the earth’s polar regions, check out these pages: