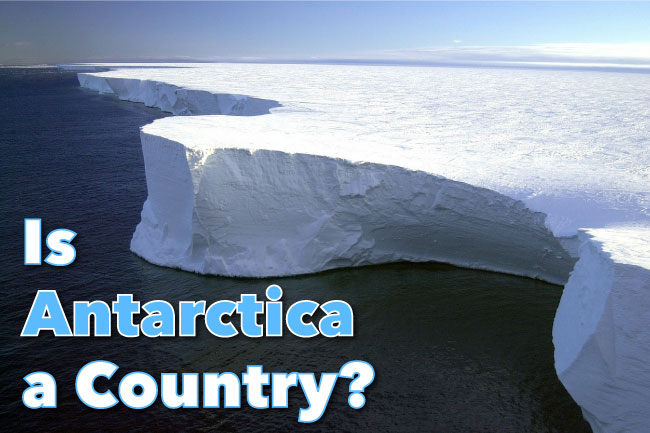 One polar region-related question that people frequently ask the internet is: Is Antarctica A Country?

If you’ve read our Antarctica Facts article then you’ll know that Antarctica is not a country. It’s a continent.

In this article, we’ll tell you why Antarctica isn’t a country, and we’ll also look at who owns Antarctica …

Is Antarctica A Country?

No, Antarctica is not a country. It’s a continent, but not a sovereign state. In fact, it’s the world’s most southerly continent; the South Pole is located in Antarctica.

Antarctica is also the world’s coldest, windiest and driest continent!

Antarctica doesn’t have a government or an economy.

Although the continent is around 1.5 times the size of the USA, only around 5,000 people live in Antarctica. That’s in the summer. In the winter, only around 1,000 hardy souls remain to face the sub-zero temperatures and frequent blizzards.

Nearly all of the people on Antarctica are either scientists or support staff.

No country owns Antarctica, although several countries have claimed parts of it. Some of these claims are recognised by other countries, but many aren’t. Some countries don’t recognise any other claims.

Thanks to the Antarctic Treaty, which we’ll learn about below, no country can make new claims, dispute anyone else’s claims, or alter their existing claims.

The Antarctic Treaty was signed in 1959 by the 12 countries who then had a presence in Antarctica. Since then, another 41 countries have agreed to the treaty.

The Antarctic Treaty states that:

‘Antarctica shall be used for peaceful purposes only.’

‘Freedom of scientific investigation in Antarctica and cooperation toward that end … shall continue.’

‘Scientific observations and results from Antarctica shall be exchanged and made freely available.’

In order to ensure that everyone is abiding by the agreement, the treaty also states that:

‘All areas of Antarctica, including all stations, installations and equipment within those areas … shall be open at all times to inspection.’

Is Antarctica A Country? Conclusion

We’ve found that Antactica isn’t a country. We’ve also found that under the Antarctic Treaty, people from all over the world can lay aside their differences in the name of science. Perhaps Antarctica is proof that people can work together if there is a higher aim involved?

You can find out more about Antarctica here: Antarctica Facts, Pictures & Information.