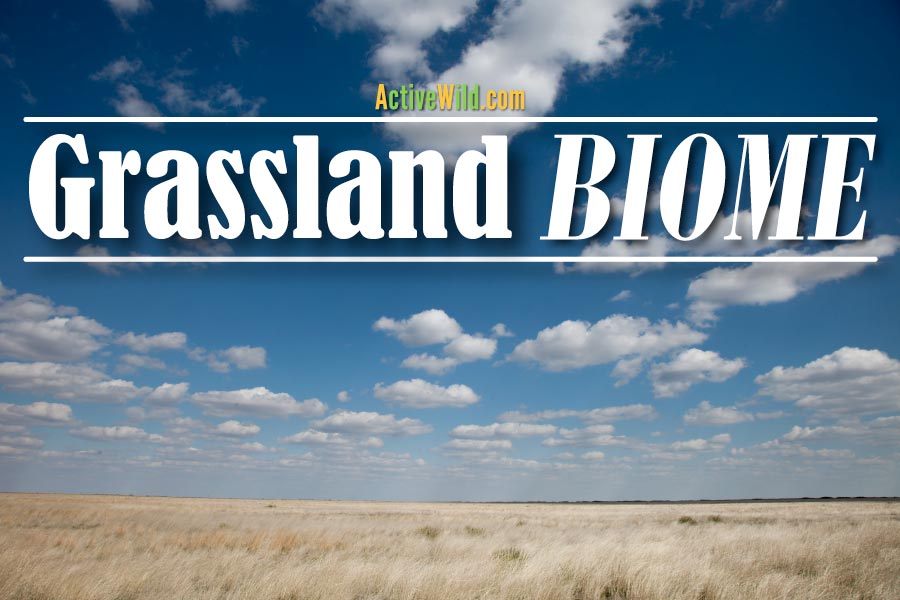 The grassland biome is the characteristic community of animals and plants found in the world’s grasslands. Grasslands are regions on Earth in which the dominant plants are grasses. Grasslands are found on every continent except Antarctica, and in total cover between 30 and 40% of Earth’s land area. With trees either sparse or absent, grasslands are wide open places that experience low rainfall. They are typically inhabited by grazing animals, whose presence helps keep tree growth to a minimum.

What Is A Grassland?

A grassland is an area whose plant growth is dominated both by grasses, and by grass-like plants such as sedges and rushes. Few, if any, trees grow in grasslands, resulting in large, open areas with minimal plant cover. The dominance of grasses in these regions is due to a number of factors, including: grazing animals; typically low rainfall (which is enough to support grasses, but not larger plants); and a relatively high frequency of wild fires, which grasses are more able to recover from than other plants.

Regions included in the grasslands biome may also be known as temperate grasslands, as they typically occur in mid-latitude or temperate regions. Regionally, areas of Grasslands are known by local names:

Grasslands are commonly found in mid-altitude or montane regions. They can occur on mountain slopes and plateaus.

Grasslands soil tends to have a well-developed soil web, and is rich and fertile. This makes it very attractive for commercial agriculture.

Unlike savannas, in which grasses may consist of up to 80% of the habitat (with the remainder being taken up by woody plants such as trees and shrubs), grass species truly dominate in grasslands.

Savannas can support both grazing and browsing mammals, but in grasslands the majority of mammalian species are grazers.

Savannas are limited to the sub-tropics, forming transition zones between forests and scrublands or deserts.

On average, grasslands receive less annual rainfall than savannas and have a greater range of temperatures both seasonally and daily.

In Grasslands, most of the rain falls in spring and early summer in the form of convectional rain.

Convectional rain is caused when moisture evaporates from the plains, rises to form clouds, cools and falls back down to earth as rain.

Relief rain occurs when warm air is forced to rise as it meets hills and mountains, causing the moisture contained within to cool and condense.

Thunderstorms are frequent in grasslands, and occasionally result in hail.

Mist may form in the early mornings but is usually burned up soon after sunrise.

Annual rainfall in grasslands is variable. Droughts can occur if several years go by with below average rainfall.

Grasslands experience vast temperature differences, both seasonally and between night and day.

In winter, temperatures at night often drop well below the frosting point, with daytime temperatures rising to near-summer averages.

A lack of cloud cover in winter is largely responsible for the high temperature variation. Nights are cold and there are long hours of sunlight which further contributes to dryness and evaporation.

Fire is a significant factor in shaping the Grassland biome. In summer, lightning strikes can start runaway fires but the real impact is felt in winter when the grass is dry and burns easily.

Woody plants do not recover easily, if at all, from devastating fires. The void left when trees are burnt is soon filled by opportunistic grasses.

Grasses are flowering plants that make up the family Poaceae. There are between 10,000 and 12,000 species of grass. They cover approximately 30% of the earth’s surface; more than any other plant species. (By some definitions this figure is as large as 40.5%.)

The diversity and tenacity of grasses have allowed them to spread to every continent except Antarctica. They can be found in every biome, except the icecaps.

Grass-like plants from other families such as rushes and sedges are also found in the grassland biome.

The stems of grasses are hollow, cylindrical and flexible, enabling them to withstand high winds.

The flowers of grasses form as small, insignificant clusters on spikes. They are not designed to attract insects for pollination but rather rely on the wind.

The seeds of flowers are spread by wind, birds and grazing animals.

Insects carry the seeds, which are otherwise known as grain, underground, where they are safe from frost and fire.

Grasses spread through lateral roots which develop at the nodes found along horizontal stems called rhizomes.

The dense underground root system of grasses enables them to survive in many types of soil. As a result, grasses are found in habitats as diverse as deserts, forest floors, marshlands and open plains.

The root system also aids the regrowth of grasses after prolonged droughts, cold spells and fire.

Woody plants with multiyear growth, such as trees and shrubs, are largely absent in the Grassland biome.

Plants such as these have difficulty surviving to maturity in the relatively harsh climactic and environmental conditions characteristic of grasslands, which include drought, frost, wide temperature variations and fire. 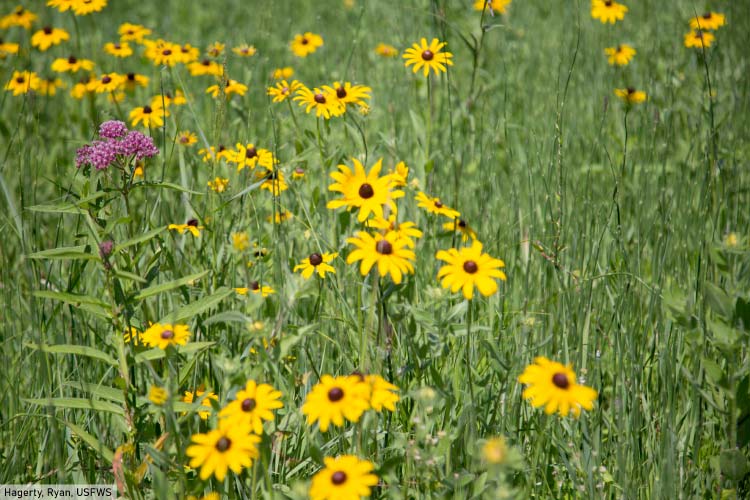 Wild flowers thrive in grasslands and at certain times of the year their presence can give regions in the grassland biome the appearance of meadows.

In grasslands flowers bloom in vast numbers for a short period after the first rains fall. In years of significant rainfall, ‘super blooms’ occur with even more abundant displays of flowers.

Much like the grasses, grassland flowers rely on the wind, birds, grazing animals and insects to spread their seeds.

Grasslands may lack the drama of the food chain found in the safari lands of the savannas, but they do support a diversity of animal life.

Grasslands historically supported vast herds of grazing mammals. There were herds of bison in the prairies of North America and springbok in the veld of South Africa that totalled millions of animals.

Unfortunately, these herds been decimated as a result of hunting and the conversion of grasslands into agricultural land.

The bison have interbred with domestic cattle and as a result only a few purebred animals survive.

Zebras, wild horses and certain species of antelope are all grazing animals found in grasslands.

Grassland predators tend to be smaller than the large cats of the Savannas, which would have difficulty hiding in the vast open spaces. They include the cheetah, which uses bursts of speed to run down its prey, wolves, coyotes, jackals and foxes.

Many grassland animals, including insects, arachnids, reptiles and mammals, escape the harsh surface conditions by living underground in tunnels, burrows and mounds.

Burrowing insects such as ants and beetles collect their food and store it below ground where they feed themselves and their young.

Rodents such as prairie dogs use burrow networks for rest, shelter from harsh conditions and refuge from predators.

Other small grassland mammals such as hares, meerkats, mongooses and jackals live and raise families underground.

Grassland birds vary in size from those light enough to perch on a stem of grass to large raptors and ground birds such as wild turkeys and bustards.

Due to the lack of trees, most grassland birds rest and nest on the ground where they are vulnerable to predators. Many rely on camouflage to keep their eggs and young safe.

Grassland birds of prey such as eagles, hawks, buzzards and owls nest in rock crevices and scan their surroundings for prey from areas of higher ground or from trees if present.

Larger raptors and carrion eaters such as vultures glide on thermals to look for food. In winter, their hunting hours are shortened as it takes time for the ground to warm and provide the thermals on which they soar.

In spring and into summer, rain gathers in hollows and low areas, forming temporary wetlands.

These seasonal wetlands support frogs and toads that lay their eggs in the water. Both their eggs and hatched tadpoles provide food for wading birds.

The waders spend the season breeding and feeding their young. Some are local birds, such as herons, ducks and geese. Others, like storks, are migratory.

The impact of development on the Grasslands biome.

Grasslands can be classified into three types: natural, semi-natural, and improved lands.

Natural areas have been set aside for livestock grazing only.

For example, in South Africa, large areas of land that are not owned by commercial farmers are known as commonage and are shared by pastural farmers.

Overgrazing occurs when the carrying capacity of the land is exceeded. Erosion results where animals repeatedly use the same paths.

Browsing livestock, e.g. goats, can be detrimental to the grasslands as they tend to pull up the roots of natural grasses, destroying their defences.

Semi-natural grasslands are managed areas and are used for live stock grazing and haymaking.

The latter practice is labour intensive but does ensure that the livestock have winter feed and prevents the grass being destroyed by fires.

Improved lands have been cultivated by the introduction of commercially viable non-native grasses. The soil is disturbed by ploughing or tilling.

The diversity of the land is often reduced to monocultures, which result from planting the same crop for several, consecutive years. The degradation of the soil is remedied with artificial fertilisers and supplements.

Pesticides, such as herbicides and insecticides further degrade the diversity by killing off competing varieties of grasses and naturally occurring insects. This has a knock-on effect, further up the food chain.

Sadly, much of the natural Grassland biome worldwide has been converted to arable land and livestock grazing.

Discover more about biomes, ecology and habitats on the following pages: