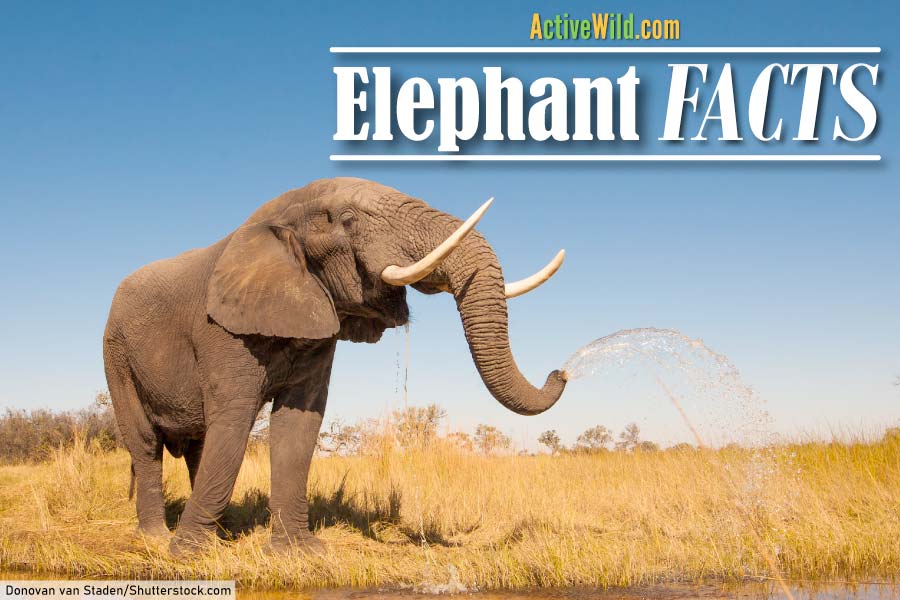 On this page you’ll find a collection of fun facts on elephants, along with pictures and interesting information on elephant species, ecology, life cycle, threats and conservation…

Whatever the reason, elephants are some of the most beloved of all animals. People travel halfway around the world just to be near them, and they feature prominently in the art and mythology of Africa and Asia. There’s nothing else quite like them.

Let’s find out more about these (usually) gentle giants…

What Is an Elephant?

The elephant family also includes dozens of extinct species, such as the woolly mammoth and the North American mastodon.

Asian elephants stand about 9 feet / 2.74 meters at the shoulder, and have a very different appearance from their African cousins. The Asian elephant has much smaller ears, and the top of its head is bulbous compared to the flat-headed appearance of African elephants.

The largest elephant ever recorded was an African bush elephant that stood 13 feet / 3.96 meters at the shoulder, towering over ordinary elephants by several feet. His name was Henry and he lived in Angola, southwestern Africa. His preserved body still stands in the rotunda of the Smithsonian Museum of Natural History in Washington, DC, where he greets millions of visitors each year.

Elephants survive on a low-nutrient diet of grasses and mature leaves, which have to be digested for a long time to extract nutrients.

Because their diet is not very nutritious, they have to eat a lot: in zoos, elephants may eat as much as 500 pounds / 227 kg of hay in a single day.

An elephant’s body is a relic of the Miocene, the geologic period dominated by large mammals. During the Miocene, there were dozens of elephant species living all over the world, from the steaming wetlands of equatorial Asia to the icy tundra of northern Europe.

The most famous prehistoric elephant is the woolly mammoth (Mammuthus primigenius) of Ice Age Europe. These shaggy, slope-backed animals roamed the tundra under the shadow of the polar glaciers, where they used their tusks to scrape away ice and tough, frozen soil to get at the buried vegetation. Their populations declined as the ice age ended, and the added pressure of human hunting drove them to extinction.

In North America around the same time, the American mastodon (Mammut americanum) inhabited wetlands and scrubby forests from Alaska to the Gulf of Mexico.

Mastodons differed from mammoths in the shape of their teeth and the habitat they lived in: mammoths lived in much more open environments, like plains and steppes, whereas mastodons preferred more closed woodlands and wetlands. Mammoths lived all over the world, but mastodons were restricted to North America.

The largest prehistoric elephant was the steppe mammoth, which inhabited northern Europe during the rapid climate fluctuations of the Middle Pleistocene. Adapted for extreme cold, it had a thick coat and towered over 15 feet / 4.57 m. A grown human could have walked right between their legs and under the belly without bending over.

Elephants are so unusual that no one is really sure who their closest relatives are. Based on DNA evidence, the best guess right now is that their closest cousin may be the Sirenians, or sea cows: animals like manatees and dugongs.

Another strong contender, amazingly, is the hyrax, a tiny rabbit-like creature that lives in Africa.

Although elephants look a bit like rhinos and hippos, they are not close relatives.

Why did elephants get so big? The most obvious advantage of large size is that it helps keep the elephant safe from predators. Elephants share their habitat with some of the largest predators on land: tigers in Asia and lions in Africa. By growing so massive, elephants make themselves intimidating to all but the boldest of the big cats.

Another advantage of size is that it allows elephants to reach higher than other animals in their search for food. That can be a big help for bush elephants, who live in relatively dry areas where drought is a major concern.

There’s one more advantage of being big, and it has to do with digestion. A big body (with a big belly) can digest low-quality plants that would just pass right through a smaller digestive tract. Animals that eat leaves, grasses, and other nutrient-poor foods tend to get much bigger than their fruit- or seed-eating cousins. Gorillas, cows, and elephants are all examples of this trend. 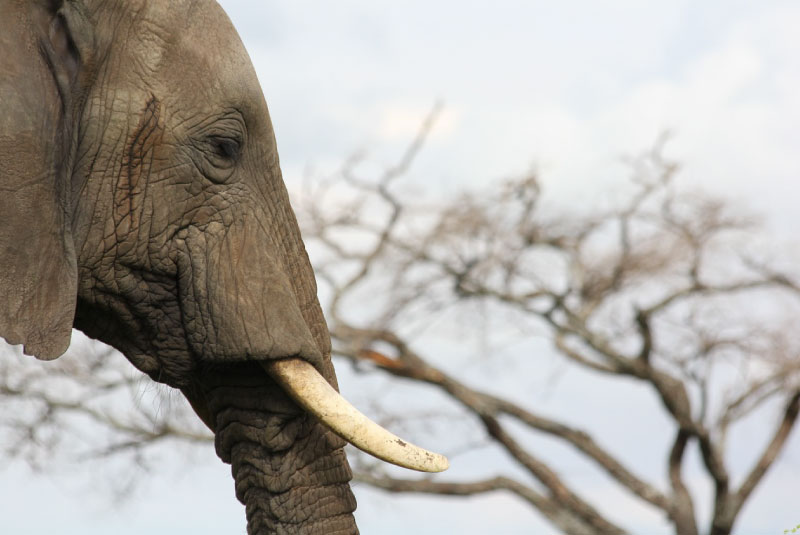 Apart from its size, an elephant’s most striking feature is its trunk. The trunk evolved as an extension of the nose, but calling the elephant’s trunk its “nose” would be a little like calling a human hand a kind of fin. Sure, hands evolved from fins, but the hand has evolved to do things no fin could ever do.

Scientists aren’t sure how the trunk originally evolved. It may have been a kind of snorkel, allowing prehistoric elephants to breathe while they searched for submerged food in a semi-aquatic environment. Or it might have evolved to manipulate objects like food and obstacles.

Today, the trunk serves a wide range of purposes in the lives of elephants. They use the trunk like an arm to pluck grasses and strip leaves to satisfy their constant hunger. They also use the trunk to drink, sucking up huge jets of water and then spraying it into their mouths (or over their bodies when they need a bath).

The trunk is also a sensitive probe that elephants use to explore objects around them, much the same way humans use their hands. But unlike a hand, a trunk provides smell information as well as touch.

After the trunk, the next thing you’ll probably notice about an elephant is its tusks. The tusks are massive front teeth that continue growing throughout an elephant’s lifetime.

Both male and female African elephants have tusks, but tusks are only present in male Asian elephants.

African elephants mainly use their tusks for digging: by rooting around with their tusks, elephants can find buried roots or water sources that other animals can’t reach. They also dig for mud, which contains nutrients not found in the elephant’s tough plant-based diet. This mud-eating behavior, called geophagy, is an active area of research in elephants and other animals that do it.

Just like humans, who can be left or right-handed, elephants seem to have a “dominant tusk.” Some favor the right, others the left.

Tusks are also powerful weapons. Bull elephants sometimes compete with each other for dominance, using their tusks to grapple and butt just like stags would do with their antlers. In Asian elephants, male competition is the main purpose of the tusks, which is why females have lost them.

Elephants are some of the most intelligent creatures on earth. Their brains are massive – even bigger than the brains of the much larger-bodied humpback whale. More remarkable still, those brains develop extremely quickly as the animal grows, much like whales and primates but completely unlike other mammals.

With their oversized brains, elephants have some remarkable abilities. They’re one of only a handful of animals that understand mirrors – they can recognize their own reflection and therefore understand, at the very least, that they have bodies similar to the bodies of their groupmates. Some scientists have speculated that elephants may even have a sense of self, of personal identity.

Elephants form flexible groups that vary in size depending on local conditions. In dry areas, they may range with a small family group of 5 to 7 individuals. During the rainy season, when food is abundant, the groups come together and may swell to 30 or more members.

Wild elephant herds are led by a matriarch, an older female. Contrary to the popular myth, elephants do forget things from time to time, but they have long lives and long memories. Older matriarchs know where to find food and water throughout the year, and other members of the herd defer to the most well-informed individual. If only human groups were so wise.

Male elephants can be aggressive, so they often travel alone or with small all-male “bachelor groups.” They leave their mother’s herd when they reach adulthood and often spend their whole lives in relative solitude.

In addition to their overwhelming natural beauty, elephants play a crucial role in maintaining their ecosystem. All three elephant species are considered “keystone species”, organisms whose extinction could lead to the collapse of the whole ecosystem.

Elephants are particularly important in maintaining the African savanna: by controlling the growth of woody plants, they keep the habitat open and suitable for smaller grazers like oryx and antelope.

The main threat to elephants is poaching. Historically, the ivory from elephants’ tusks has been a valuable material for jewelry and decorations, almost like a biological gemstone.

Elephants’ tusks are also used in some traditional medicines, though there is no scientific evidence that they have medicinal properties.

The international ivory trade has been banned since 1989, but there is still a market for elephant tusks.

Elephants also suffer from habitat fragmentation. These huge animals need to roam over huge areas, and human expansion has broken their habitat up into small pieces. A fence, town, or highway might not destroy the savanna outright, but it will interrupt elephant migration routes and cause their population to decline.

Fortunately, China – which historically was the main market for elephant ivory – enacted its own ban in 2018, which dramatically reduced demand. Elephant poaching is now less lucrative than it once was, and conservation experts are hopeful that this could lead to a rebound in elephant populations.

Find Out More with Active Wild