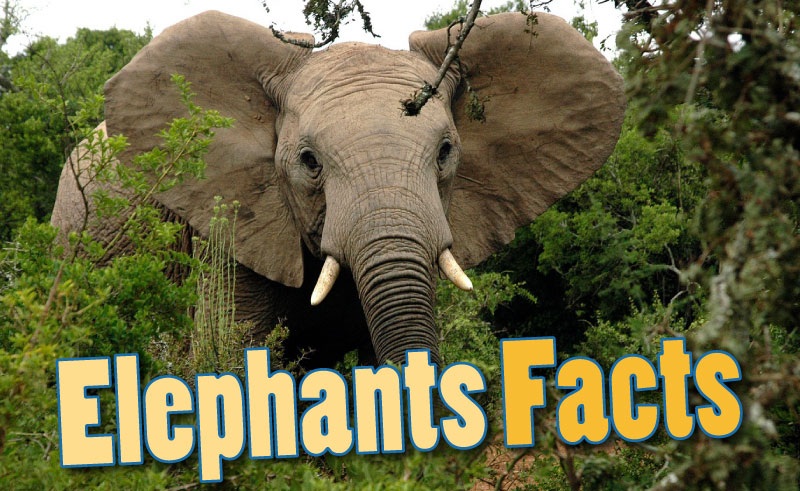 Everyone knows what elephants look like: they’re big, gray and wrinkly… and they have trunks! African elephants weigh up to 7 tonnes – that’s the same as about three cars! Let’s discover some more interesting elephant facts…

What’s the difference between African and Asian elephants?

This means that there are now three recognized elephant species.

African bush elephants are bigger than Asian elephants, and both males and females have tusks.

Asian elephants are a little bit smaller and only the males have tusks.

If you touch the skin of an Asian elephant, it is quite smooth and their ears can’t wrap around their face and cover their eyes.

How much do elephants weigh?

Elephants are the biggest land animal on the planet (the blue whale is the biggest animal, but it lives in the sea). Picture how big a Labrador dog is. Now imagine that dog about 50 times bigger – that’s the size of an elephant!

Elephants have big, heavy bodies. Their trunks are also really heavy, too. A big, male elephant can have a trunk that weighs 140 kilograms. Can you imagine if your nose weighed that much? You would get quite a headache!

How long do elephants live?

Elephants live longer than most animals. Because they are so big they don’t have many predators (animals that hunt them). In the wild, elephants can live to be over 70 years old. But you can’t really tell how old an elephant is because they are born with so many wrinkles!

Like most mammals , elephants are able to swim. It’s hard to picture a huge elephant taking a dip in the local pool (it would have to be a very big pool!) but elephants can swim really well. They use their long trunks like a snorkel so that they can breathe underwater.

Elephants really like swimming. They love playing and splashing in the water to cool down in the hot sun. Elephants even have water fights sometimes. They get lots of water in their trunks, and then shoot it out at their friends. You wouldn’t want to be up against an elephant in a water fight, would you!

The amazing film below shows elephants crossing a river. A calf gets into difficulties and two adult elephants rush to its aid.

Where do elephants live?

Asian elephants live in a variety of grassland and forest habitats. They live in India, Sri Lanka and China. Asian elephants are also found in Southeast Asian countries like Thailand and Indonesia. Here the elephants normally live in rainforests where there are lots of trees and lakes for water to drink and go swimming in.

What do elephants eat?

Elephants are herbivores which means that they don’t eat meat. They love eating leaves, twigs, bamboo and roots. All of their food can be found in their natural habitats. Since elephants have such long trunks, they can use these to reach up to the very highest branches to get the tastiest leaves!

These big animals need to eat a lot through the day to make sure they get enough nutrients. They can spend up to 16 hours a day gathering food. That’s a very long time to prepare dinner! Adult elephants eat around 100 kilograms of food a day – it’s a good thing they have plenty of trees to get all those leaves from.

Two types of elephant are critically endangered. These are the Sumatran elephant and the Bornean pygmy elephant.

This means that there is a very real chance that these creatures could soon be extinct.

The other Asian elephants are endangered.

African elephants are classed as ‘vulnerable‘. This means that they are still aren’t safe.

There used to be millions of elephants living across African and Asia. Now, there are far fewer elephants in the wild.

Elephants are endangered because they are losing their natural habitat. This is mainly because humans chopping down trees from the forests to create farming land where the elephants used to live.

An elephant’s tusks are made from a very valuable material called ivory. Ivory can be used to make a variety of objects, including knife handles and musical instruments. Things made out of ivory are very expensive, and it is very tempting for people living in poor countries to kill elephants for their tusks.

In the 1980’s (not very long ago), nearly half of the African elephants in the world were killed for their tusks.

It is now illegal (people are not allowed to do it) to hunt elephants for ivory and even to buy or sell things made from ivory. Sadly, some people still do.

I don’t know about you, but I’d much rather see a living elephant than a bit of jewellery!

There are many people fighting to save elephants. Organisations such as The David Sheldrick Wildlife Trust work hard to protect elephants from poachers (people who hunt elephants for their tusks).

Perhaps if you learn enough about wildlife you could get a job protecting elephants!