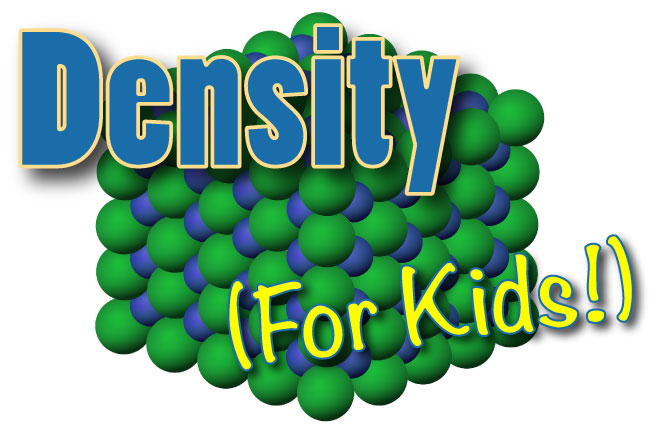 This page is all about density. It will show you what density is, how it is defined and how it is measured. The article includes a simple explanation and facts about density for kids.

Our investigation of density starts with a common trick question:

I hope you didn’t fall for it and say gold! The answer is, of course, that 1 kilogram of gold is just as heavy as 1 kilogram of feathers. They both weigh 1 kilogram!

Now think how big a 1 kg bag of feathers would be.

Compare it to the size of 1 kg of gold.

The 1kg bag of feathers would be much bigger than 1kg of gold.

This is because the density of gold is higher than that of feathers.

If you had two boxes, both of the same size, and you filled one with gold and one with feathers, which box would be the heaviest?

Answer: the box filled with gold of course! Because feathers aren’t as dense as the gold, the same volume of feathers would be much lighter.

What Is The Definition Of Density?

Basically, density is how compact an object is.

Put another way, density is the mass of an object divided by its volume. We’ll find out about mass and volume below.

How Do You Find Density?

In order to find out the density of an object, you need to know two other things about the object: its volume, and its mass.

You would then divide the mass of the object by its volume to find its density.

Volume is the amount of space that something takes up.

For example, if you’ve been given a box containing a present, then you could find the box’s volume by measuring its length, its width and its height.

This would give you the box’s volume.

If the box was very heavy, your present would be very dense. It could be a box of gold!

If you could pick the box up easily, then your present wouldn’t be very dense (or someone could be playing a trick on you by giving you box of feathers)!

The other thing you need to know when finding out the density of an object is its mass. Mass is actually quite difficult to explain, and the best way to think of it (for the time being) is how heavy something is.

However, mass is slightly different than weight. Weight is a force, and is affected by gravity. An object would weigh less on the moon than on the Earth, because there is less gravity there.

Mass stays the same wherever you are: the earth, the moon, or floating in outer space!

For simple density experiments, you can use scales to measure the mass of an object. Remember, however, that scales will measure weight, not mass.

If you want to be very scientific, you can use a triple beam balance. This will measure an object’s mass, rather than its weight.

What Is The Formula For Density?

This is done by dividing the object’s mass by its volume.

The formula for density is: Density = Mass / Volume

This equation can also be written: ρ=m/V

In the formula, ρ is the symbol for density. Scientists measure density in kilograms per cubic metre (kg/m3).

m is the symbol for mass. Scientists measure mass in kilograms (kg).

V is the symbol for volume. Scientists measure volume in cubic metres (m3).

The SI unit for density is kilograms per cubic metre (kg/m3).

Scientists need to be able to share their discoveries with other scientists all over the world. This means they all need to measure their findings using the same units.

That’s why scientists have all agreed to all use the same units to measure with. This system is called the International System of Units.

So, when a French scientist is talking about density, he will use kilograms per cubic metre, and an American scientist will understand him!

We hope that you have enjoyed this article about density for kids. Want to know more about science? See all of our scientific articles!