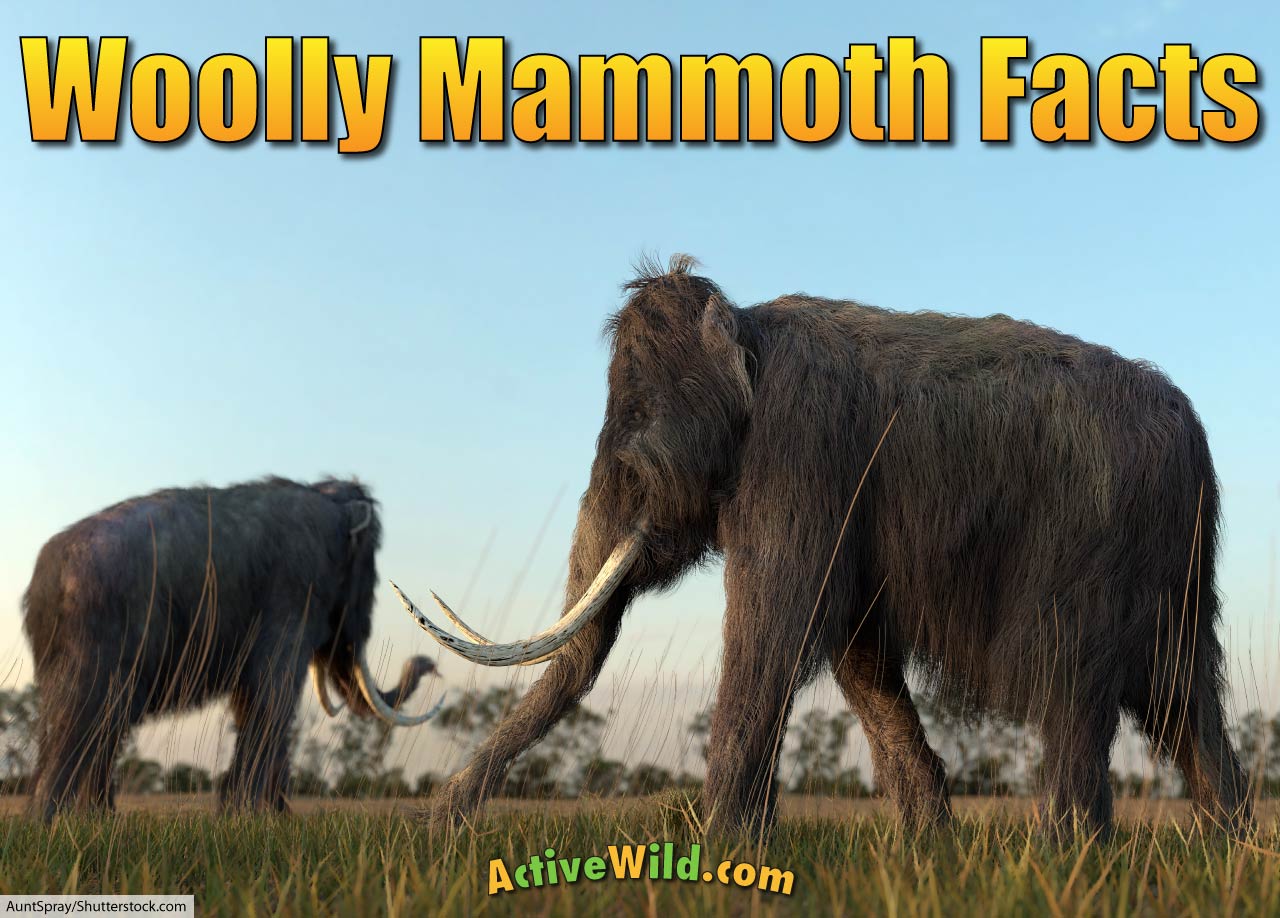 Woolly Mammoth Facts At A Glance

Find out more about prehistoric animals with Active Wild

The woolly mammoth was a large herbivore that lived during the Pleistocene and early Holocene epochs of the Quaternary Period. Although not the largest species of mammoth, it was the most widespread and the last one to become extinct.

The woolly mammoth was alive during the Ice Age, and has a number of adaptations – including the thick coat which gives the species its name – for living in the cold.

The closest extant (living) relative of the woolly mammoth is the Asian elephant (Elephas maximus).

The woolly mammoth was a similar size to the modern African bush elephant (Loxodonta africana). However, its skull was narrower, and it had smaller ears and a shorter tail than the living species.

In cave paintings, the woolly mammoth is depicted with a high, domed head, a single hump over the shoulders and a sloping back.

The coat of the woolly mammoth covered its entire body and ranged from dark brown to light brown in color. The coat’s coarse ‘guard hairs’ (the long, outer hairs) could be as long as 90 cm (35 in) on the animal’s flanks and abdomen. The dense undercoat consisted of shorter, slightly curled hair.

Other cold-weather adaptations include a thick skin with numerous oil-secreting glands, and a layer of fat that was up to 10 cm (3.9 in) thick.

The tusks of the woolly mammoth were very long and curved inwards – in some individuals the tips crossed. Females were smaller and lighter than the males and had shorter tusks.

Where Was The Woolly Mammoth Found? 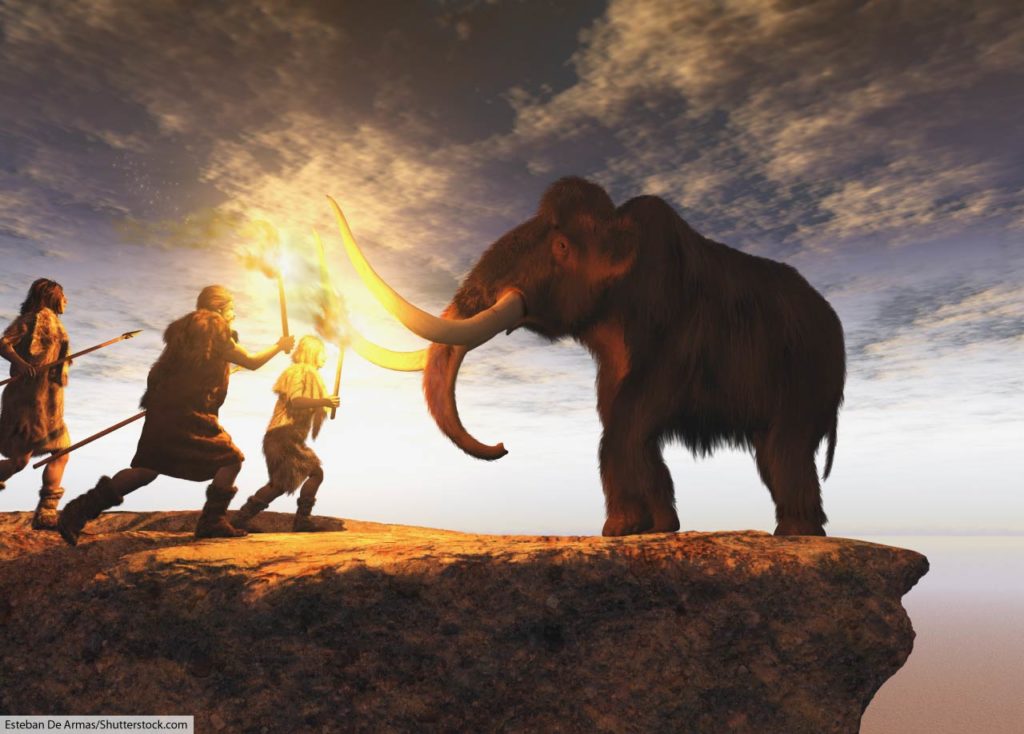 The woolly mammoth was the most widely distributed large mammal during the last Ice Age. The total distribution area has been estimated to have been roughly 33,300,000 km2 (12,850,000 sq. mi), and covered large parts of Asia, Europe and North America. The southernmost woolly mammoth specimen was discovered in the Shandong province of China.

It’s believed that there were two distinct groups (possibly sub-species) of woolly mammoth, with one being found only in the middle of the High Arctic.

The woolly mammoth was mostly found in a habitat today known as ‘the mammoth steppe’ or ‘tundra steppe’. This expanse of frozen land covered parts of Northern Asia, Europe and North America during the last Ice Age.

The mammoth steppe resembled the grassy steppes found in Russia today, but with a greater diversity and abundance of plant species.

Like modern elephants, the woolly mammoth appears to have been social. It is likely that females lived in family groups with their young, while males either lived alone or formed small ‘bachelor’ groups.

The mammoth is believed to have used its tusks to fight, to defend itself from predators, and to forage. It’s likely that the trunk was used by the woolly mammoth in social interactions as well as to manipulate objects.

Although little is known for sure about woolly mammoth reproduction, it was probably very similar to that of modern elephants.

The mating season is likely to have occurred during summer or autumn. There is evidence that male woolly mammoths (like elephant bulls) experienced ‘musth’ – a condition in which reproductive hormones peak and there is an associated increase in aggressive behavior.

It is likely that females probably gave birth to a single calf during spring or summer after a long gestation period of 21 to 22 months. A newborn woolly mammoth weighed around 90 kg (200 lb.).

The calves were nursed for at least 3 years and weaned gradually. Small milk tusks appeared around the age of 6 months and were replaced by permanent tusks about a year later.

What Did Woolly Mammoths Eat?

The woolly mammoth was an herbivore whose diet mainly consisted of grasses and sedges. Other plant material, including shrubs, twigs, tree bark, mosses, leaves, flowers, fruit, berries and nuts, would also have been consumed.

The animal used its 4 large molars to grind up tough vegetation. The impressive tusks would have been used as tools to dig up plants, remove snow to uncover vegetation, strip bark off trees and break ice to access drinking water. The tip of the animal’s trunk was probably used to grasp short grasses and delicate plant material.

A fully-grown woolly mammoth would have required approximately 180 kg (397 lb.) of food daily and may have spent as many as 20 hours foraging per day. The species had the ability to store fat in the neck and the withers (the ridge between the shoulder blades) for times when food was scarce.

Both young woolly mammoths and sickly adults were vulnerable to predation by animals such as wolves, cave hyenas as well as saber-toothed cats and other large felines.

Early humans may have begun to hunt woolly mammoths as early as 45,000 years ago. 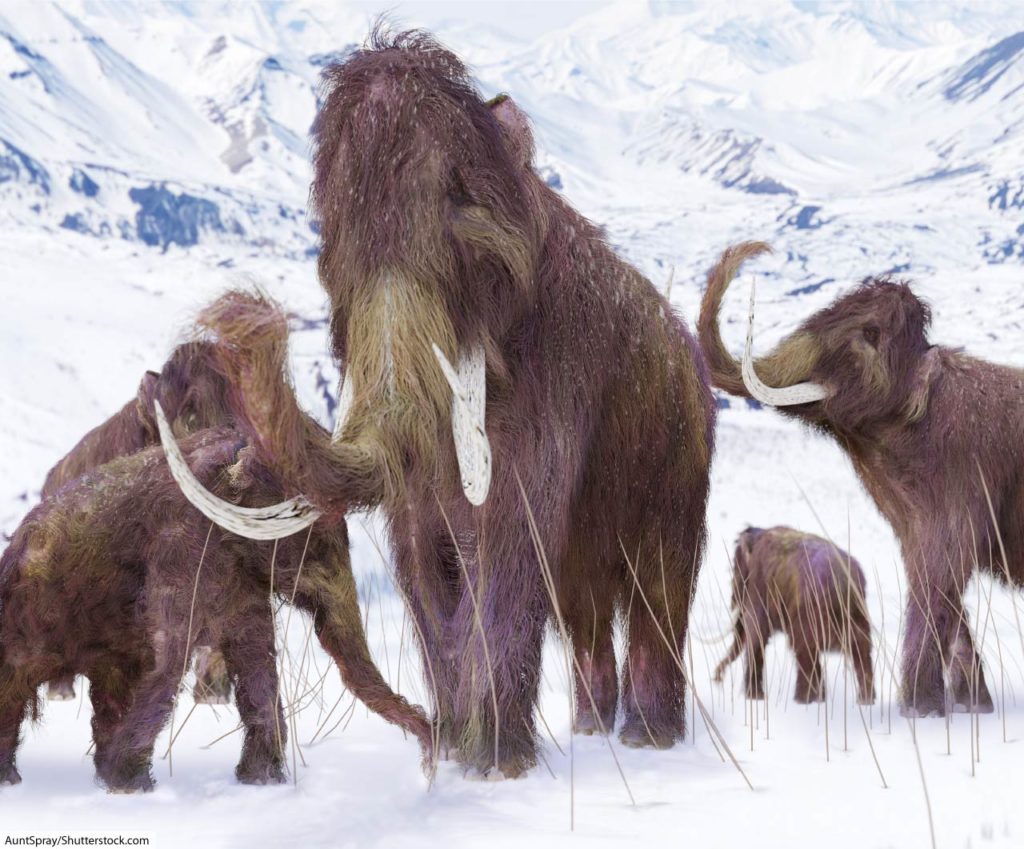 Most woolly mammoth populations disappeared 14,000 to 10,000 years ago during the Quaternary extinction event at the end of the Pleistocene epoch.

The last mainland population of woolly mammoths died out in the Kyttyk Peninsula in Siberia 9,650 years ago, but a few isolated island populations survived for longer.

It is believed that the woolly mammoth disappeared either because of climate change (which led to a shrinkage of its habitat) or because humans hunted it to extinction – or as a result of both.

DNA collected from frozen woolly mammoth specimens is being used in attempts to bring the species – or at least some of its characteristics – back to life. Some scientists believe that creating a viable elephant-mammoth hybrid will be possible in the next few years.