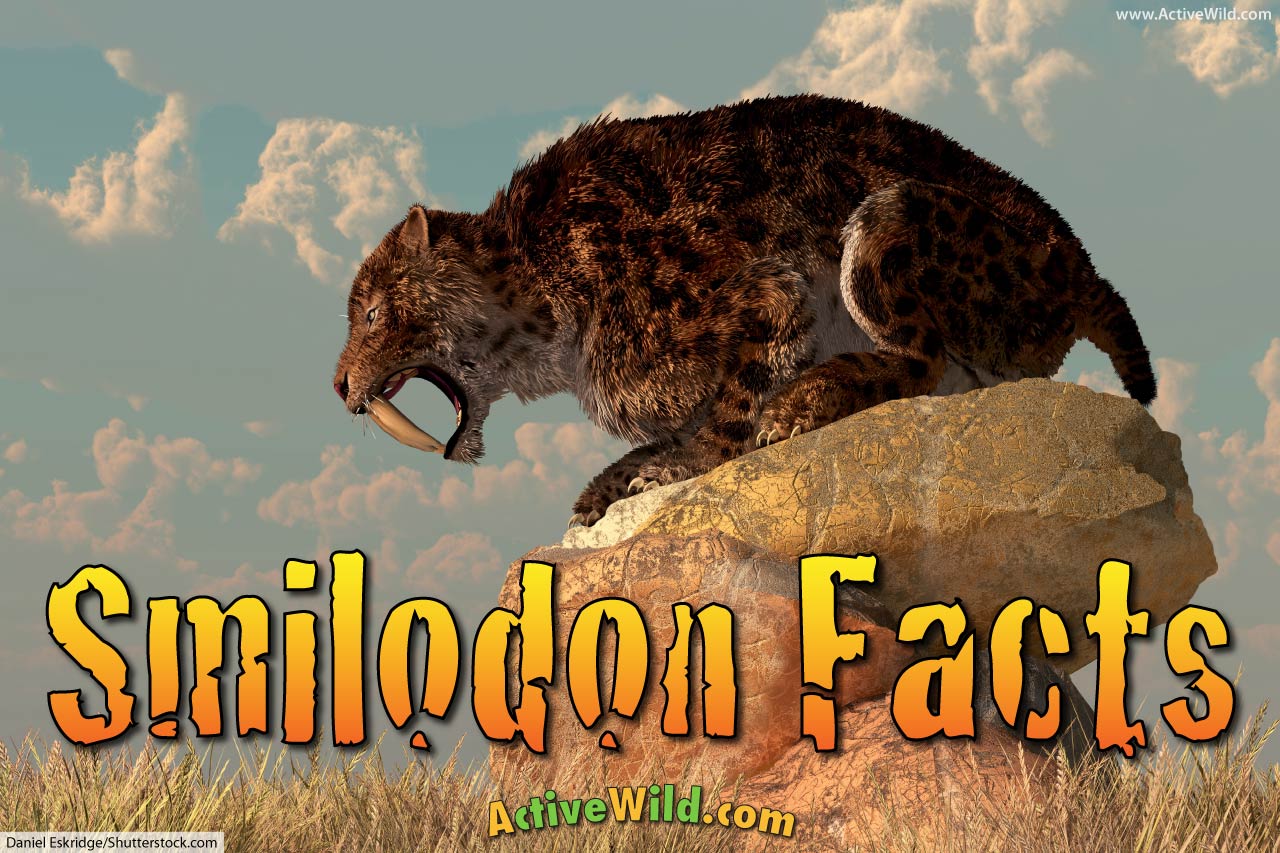 Smilodon facts for kids and adults. On this page you’ll find pictures and information on one of the world’s best-known prehistoric animals: the ‘saber-toothed’ cat Smilodon.

Smilodon Facts At A Glance

Smilodon is an extinct member of the cat family, Felidae. It lived in the Americas from 2.5 Mya (million years ago) to 10,000 years ago, during the Pleistocene and early Holocene.

Smilodon was around the size of today’s big cats. Its most distinctive characteristic was a pair of fearsome oversize canine teeth that projected downwards from the upper jaw.

Smilodon is the best-known of around 12 genera whose members are known as ‘saber-toothed cats’.

The name of the genus (i.e. the ‘Smilodon’ bit of the two-part scientific name) means ‘knife tooth’.

Smilodon was a heavily built, muscular cat with powerful forelimbs and a short tail.

The 3 species differed greatly in size: S. populator was the largest and its estimated weight was up to 4 times that of S. gracilis. S. gracilis was roughly the size of the modern jaguar, while S. fatalis was similar in size to a modern lion.

The blade-like canines of Smilodon were long and slender with finely serrated edges. These deadly weapons were up to 28 cm (11 in) in (curved) length.

Smilodon had a short, wide muzzle with a gape that reached nearly 120 degrees (in comparison, the gape of the modern lion reaches only 65 degrees). This was an animal that knew how to ‘open wide’!

Smilodon has been depicted with both a plain and a spotted coat. However, these are artistic impressions; the actual pattern and coloration is unknown.

There appears to have been little to no difference between males and female smilodons.

Where Was Smilodon Found?

Two of the three known Smilodon species (S. gracilis and S. fatalis) were primarily found in North America, while S. populator was restricted to South America.

It is thought that S. populator may have evolved from S. gracilis after the latter species spread to South America during the early to middle Pleistocene.

The largest number of Smilodon fossils (S. fatalis) have been found in the La Brea Tar Pits in Los Angeles, California. 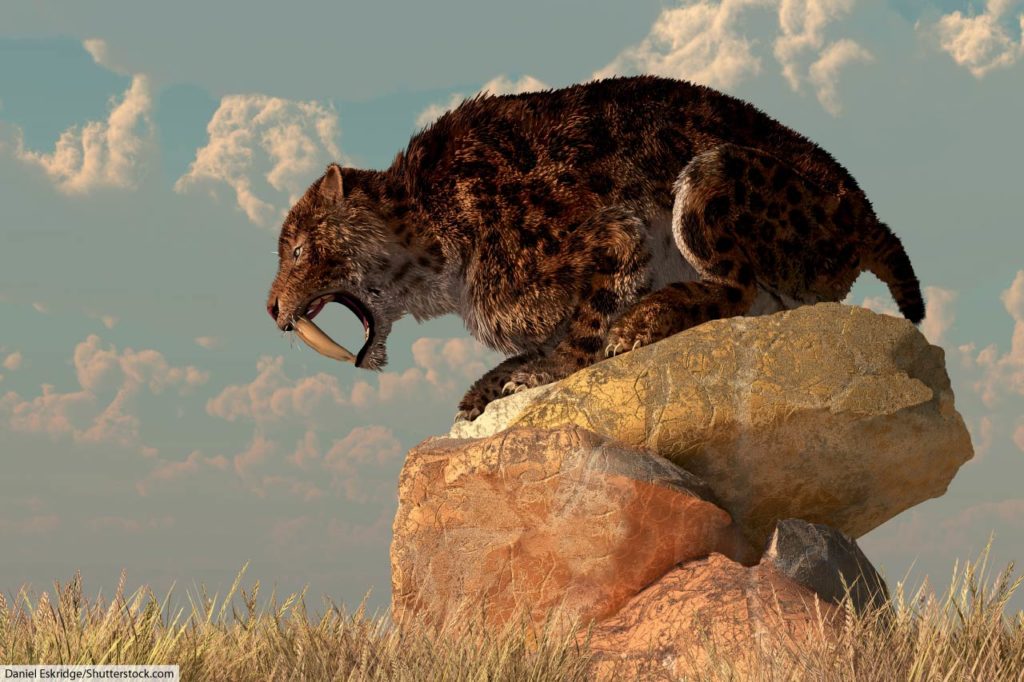 Most Smilodon fossils have been found in sediment layers from woodland environments and plains. As a probable ambush predator, Smilodon is likely to have inhabited forests, margins of woodlands and brushy plains. These areas would have offered cover as well as access to large prey animals.

It is unclear whether Smilodon was solitary or social – the fossil remains of the animal have been interpreted to support both views.

The size and the flexibility of the hyoid bone (tongue-bone) suggests that Smilodon, like modern lions, could have communicated by roaring. This would have made Smilodon a member of the group of animals known as ‘big cats’.

It is likely that Smilodon spent most of its life on the ground rather than in trees. The relatively small size and position of the Smilodon’s eyes means it wasn’t as good at perceiving depth as the modern arboreal (tree-dwelling) cat species. Its heavy build would also have made climbing difficult.

Smilodon likely relied on stealth rather than speed as a predator. Its limbs had similar proportions to those of modern forest-dwelling cats that rely on ambush hunting. Furthermore, Smilodon’s short tail would not have offered much assistance in balancing the cat while it was running fast.

Smilodon’s long heel bones suggest that it was good at leaping.

The lack of a large size difference between the sexes suggests that the males did not compete aggressively for females, and that Smilodon may have been monogamous (mated with just one partner).

According to studies, Smilodon was physically robust from birth. The lack of juvenile fossils at La Brea Tar Pits suggests that the young probably remained in a den while their parents hunted.

The young developed their saber-teeth gradually: they first appeared at around the age of 1.5 years and reached their full size when the Smilodon was roughly 3 years old. For a period of several months, the young had both infant and adult canines in their mouth.

What Did Smilodon Eat?

Smilodon was a top predator and probably specialized in hunting large mammals.

In North America it hunted animals such as bison, camels, giant ground sloths and horses. In Florida, S. gracilis also probably preyed upon peccaries of the genus Platygonus, the large-headed llama-like animals of the genus Hemiauchenia, and possibly even the armadillo-like glyptodonts.

The dire wolf (Canis dirus) and the American lion (Panthera leo atrox) probably competed with the Smilodon for prey in North America.

In South America, the available prey animals included ungulates such as litopterns and toxodonts. The differences in typical prey may partly explain the physical differences between the different Smilodon species.

How Did Smilodon Hunt?

It is likely that Smilodon was probably an ambush predator that used its powerful forelimbs to grasp and pin down large prey.

How exactly Smilodon used its large canines is not clear: according to a popular theory, it may have delivered a fast, stabbing bite to the neck (as opposed to the slow, suffocating bite that modern cat species tend to use).

However, studies have shown that a dagger-like bite would have caused Smilodon’s teeth to shatter had they come into contact with bone. This may not have been a problem if, like modern cats, Smilodon was able to ‘feel’ with its teeth.

Another explanation is that the saber teeth were used to slice, rather than puncture, flesh, with the teeth in the lower jaw supplying leverage.

How Did Smilodon Eat?

Looking at Smilodon’s skull, you may have wondered how it could actually eat without those huge canine teeth getting in the way. A team of filmmakers found that this may not have been a problem. They put fake Smilodon teeth on lions (a brave thing to do!) and found that the cats had no problem eating their food.

Smilodon may also have scavenged carcasses left by other predators, but due to its brittle teeth it would have avoided biting into bone. 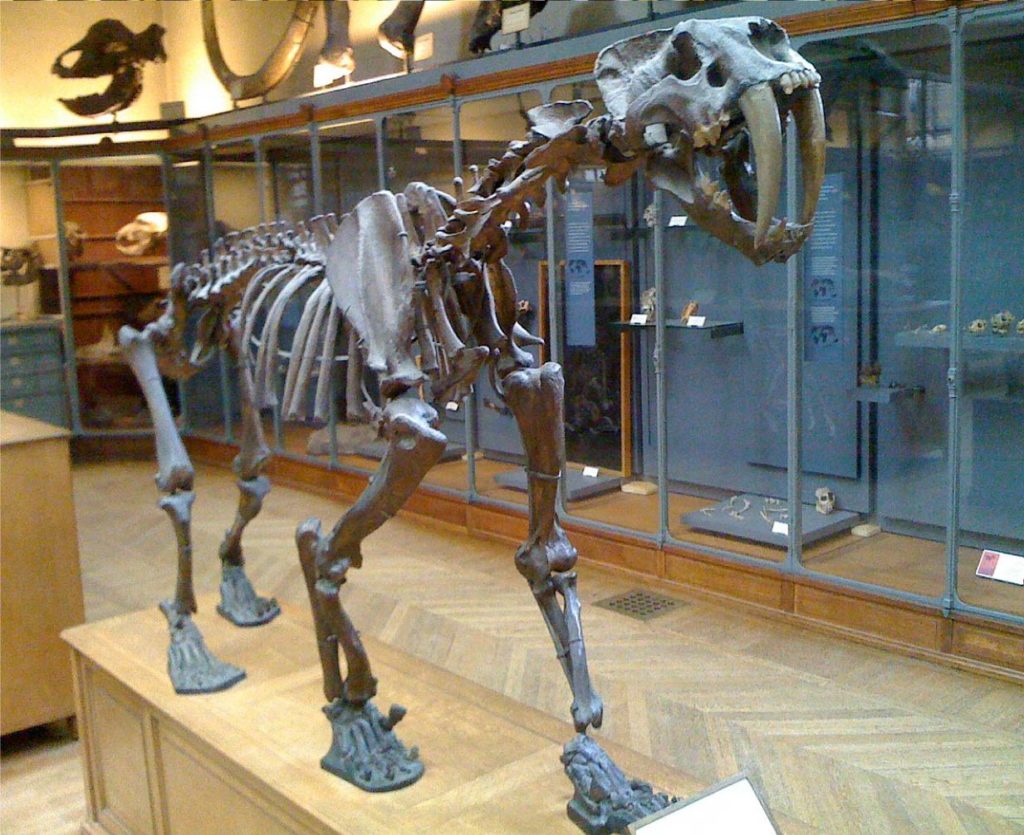 7 thoughts on “Smilodon Facts For Kids & Adults: Discover One Of The World’s Best-Known Prehistoric Animals”