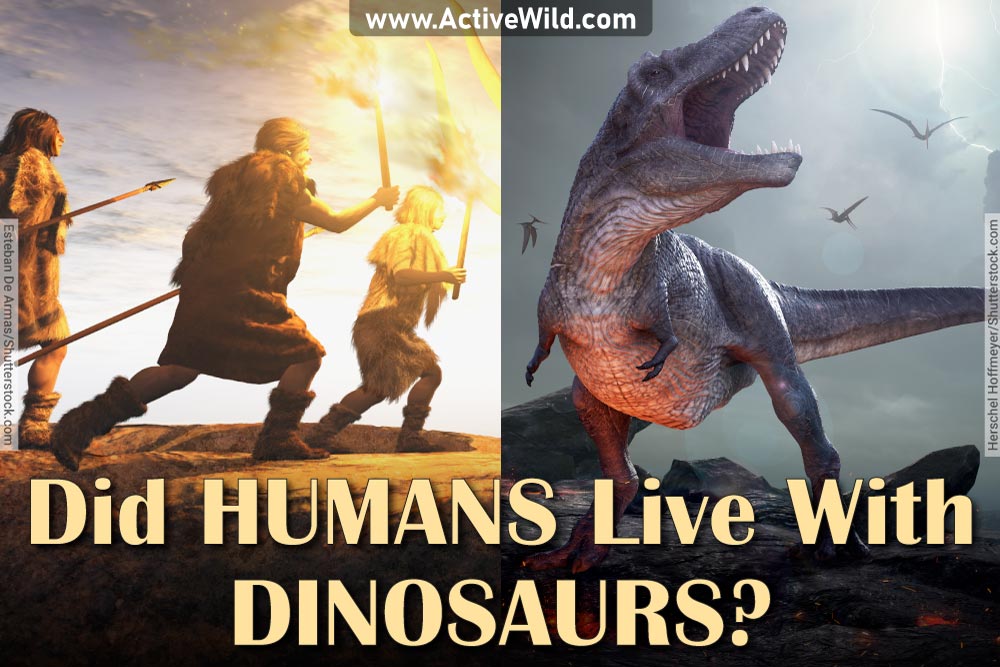 Humans did not live with dinosaurs; many millions of years separate the last (non-avian) dinosaurs and the first humans. Dinosaurs first appeared in the Triassic Period of the Mesozoic Era, and became extinct 66 million years ago. The first modern humans (Homo sapiens) appeared around 315,000 years ago; at least 65 million years after the last dinosaurs.

Note that, unless specified, on this page the word “dinosaur” refers to “non-avian” dinosaurs (i.e. non-bird dinosaurs).

MYA = Millions of Years Ago

The only dinosaurs to survive the Cretaceous-Paleogene Extinction Event that took place around 66 million years ago were the avian dinosaurs, or birds.

Therefore, while it is factually correct to say that humans coexisted with dinosaurs (because we live at the same time as birds), it may be misleading, because most people think of dinosaurs as being large animals such T. rex or Apatosaurus.

Large creatures such as these, and all other non-avian dinosaur species, died out in the Cretaceous-Paleogene Extinction Event.

So, forget what you’ve seen on “The Flintstones” or in the movies; humans (not even Stone Age man) never lived with dinosaurs!

However, most scientists think that the very first primates, which were small, insect-eating animals, did live with dinosaurs towards the end of the Cretaceous Period.

Continue reading for interesting facts on dinosaurs and early humans…

You can find out more about early humans on these pages:

When Did Humans First Appear?

Dinosaurs were an incredibly successful group of animals that existed for around 167 million years in the Mesozoic Era.

You can find out more about dinosaurs on this page: Dinosaur Facts

During that vast amount of time, dinosaurs became wide-ranging and highly diverse, ranging in size from the giant Argentinosaurus huinculenis (the largest dinosaur to be discovered, at 130 feet long and 106.3 tons) to the tiny Epidexipteryx hui (a mere 25cm).

Dinosaurs did not rule the whole world; they never lived in the sea or evolved the ability to fly. (Animals such as plesiosaurs, mosasaurs and pterosaurs were not dinosaurs.)

When Did Dinosaurs Live?

You can see more Triassic dinosaurs on this page: Triassic Dinosaurs

You can see more Jurassic dinosaurs on this page: Jurassic Dinosaurs

You can see more Cretaceous dinosaurs on this page: Cretaceous Dinosaurs

Dinosaurs were reptiles descended from small, bipedal species that lived during the Triassic Period.

Dinosaurs are one branch of a group of reptiles known as archosaurs. The early ancestors of archosaurs, the Archosauromorpha, had survived the most catastrophic extinction event that the world has ever experienced: the Permian-Triassic extinction event.

Palaentologists believe that this mass extinction was caused by large-scale volcanic eruptions.

The first dinosaurs were small animals that were vastly outnumbered by other prehistoric animals, including the early relatives of mammals, and other reptile groups.

Somehow, the early dinosaurs survived, and, as climate conditions changed, slowly began to appear in a wider range of habitats.

However, it was only in the Jurassic Period, after another extinction event, the Triassic-Jurassic Extinction Event, that dinosaurs became the dominant animals on land.

Nearly all that we know about dinosaurs comes from fossil evidence that is many millions of years old. This includes dinosaur bones, and trace fossils such as footprints. The fossil record is by no means complete, and we are adding to our knowledge of prehistoric life all the time.

The Cretaceous-Paleogene Extinction Event And The End Of The Dinosaurs

Did Early Humans Live With Dinosaurs?

The first modern humans (i.e. Homo sapiens) appeared around 300,000 years ago, tens of millions of years after the dinosaurs went extinct.

The earliest humans are thought to have lived in Africa, before moving out into what is now Europe and Asia, and eventually inhabiting most other parts of the world.

What Is A Human?

Humans (Homo sapiens) are members of the genus Homo, a group of related species that itself is part of the great ape family, Hominidae. Humans are the most prevalent of all the primates, the group of animals that includes monkeys and apes.

Hominidae is one of sixteen families in the order Primates. (See below)

Early species of genus Homo include Homo habilis and Homo rudolfensis, both of which lived around 2 MYA.

Did Early Man Live With Dinosaurs?

The first species of genus Homo appeared around 2.8 MYA; long after the dinosaurs had become extinct.

Members of the great ape family, Hominidae, are known as hominids. There are eight living hominids, including humans.

The other seven hominids are: three species of orangutan (Sumatran, Bornean and Tapanuli), two species of gorilla (eastern and western), the chimpanzee and the bonobo (both of which belong to the genus pan).

Did Hominids Live With Dinosaurs?

Hominids did not live with dinosaurs. The first hominids appeared around 17 MYA, around 49 million years after the last dinosaurs had become extinct.

The family Hominidae is part of a larger group of animals: the order Primates. Primates include all apes and monkeys, as well as related animals such as lemurs, galagos and tarsiers.

Primates evolved from arboreal (tree-living) animals, and many Primate characteristics are a result of their tree-dwelling ancestry.

You can find out more about primates on this page: Primates: The Ultimate Guide

Did Primates Live With Dinosaurs?

Early primates are thought to have evolved from small, nocturnal, insectivorous (insect-eating) animals that may have resembled small rodents.

Physically, humans possess large brains that formulate complex thought. Humans are bipedal, meaning they walk upright on two legs. Humans are mammals, which mean they give live birth, are warm blooded, and have hair, as opposed to dinosaurs, which were reptiles that laid eggs in a nest.

The scientific name for the modern human, Homo sapiens, the Latin words for “wise man”, was coined by Carl Linnaeus in 1758. (Linnaeus invented the modern taxonomy system we use to classify living things.) As other human species were named, each one of them was added to the list.

Did Humans Live With Dinosaurs: Conclusion

In the future, Jurassic Park-style technology might bring dinosaurs back to life. Humans may live with dinosaurs in the future, but they never did in the past.

Discover more about dinosaurs on the following pages: