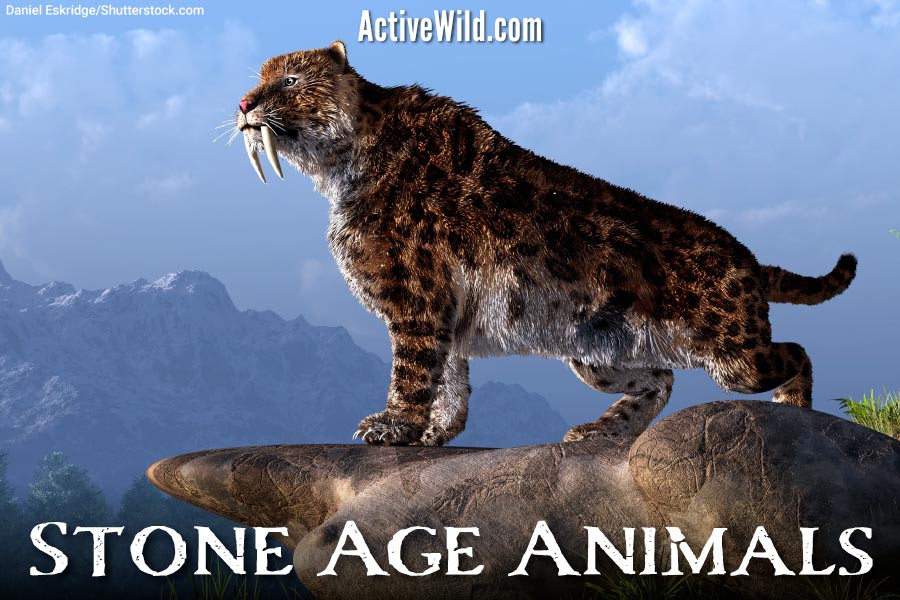 The animals of the Stone Age: list with pictures and facts.

Animals Of The Stone Age

Animals of the Stone Age include the cave bear, dire wolf, Glyptodon, marsupial lion, Mastodon, Smilodon and the woolly mammoth. Stone Age animals co-existed with early humans and their ancestors, who by the end of the Stone Age had spread across Eurasia and into The Americas.

What Is The Stone Age?

The Stone Age is a period in history during which humans and their ancestors made and used stone tools. It began around 3.3 million years ago and ended between 5,000 and 2,000 years ago, depending on location (stone tool use began and ended at different times in different parts of the world).

Much of the Stone Age is included in the Pleistocene epoch, a time in the geologic time scale that began 2.58 million years ago and ended 11,700 years ago.

The climate of the Pleistocene epoch was dominated by glacial cycles. During glacial periods, much of the planet’s northern and southern hemispheres were covered by ice sheets. These glacial periods were interspersed with warmer periods known as interglacials, during which the ice sheets would retreat.

The last glacial period began 115,000 years ago and ended around 11,700 years ago. It is known as the Ice Age, although the name can also refer to the whole Pleistocene Epoch.

The animals in this list of Stone Age animals are all known or believed to have existed alongside humans and their ancestors.

Hunting by humans is one of the two main causes of extinction of stone-age animals, the other being a warming of Earth’s climate that followed the end of the last glacial period, which occurred around 11,700 years ago.

Many animals of the Stone Age had evolved to live in cold climates and were unable to survive the lengthy interglacial period that followed the end of the Ice Age. 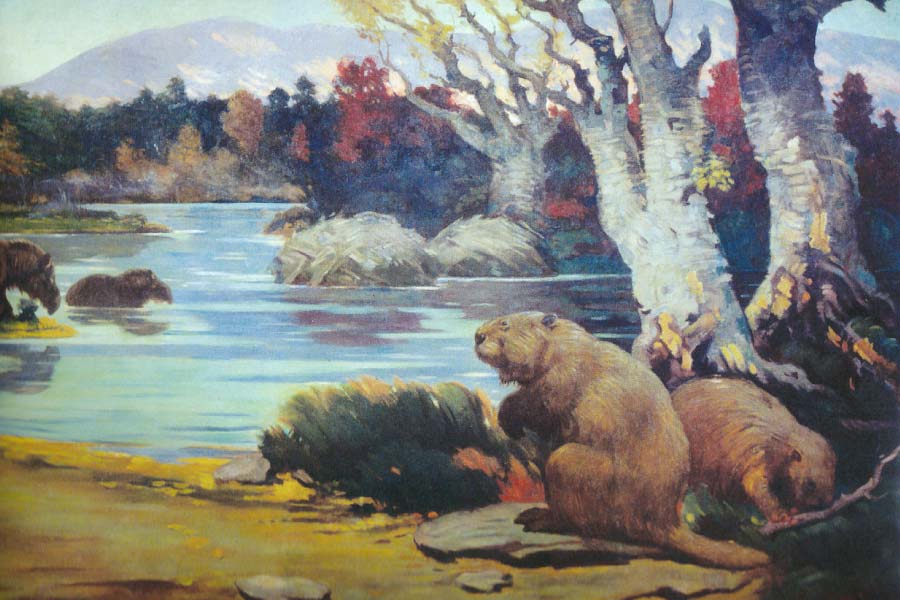 Castoroides, also known as the giant beaver, was a bear-sized member of the beaver family Castoridae. It appeared in the late Pliocene and lived through most of the Pleistocene. Two species of giant beaver have been identified.

The largest giant beavers grew to around 2.5 m / 8.2 ft in body length. The incisor teeth of Castoroides were much longer than those of modern beavers, reaching around 6 in. / 15 cm in length. Its tail was also longer and thinner.

The giant beaver is thought to have shared the largely aquatic lifestyle of living beavers.

The cave bear was a stone age relative of living brown bears, and a member of the bear family, Ursidae. Its scientific name is Ursus spelaeus. With a body length of up to 3 m / (9 ft 10 in), the cave bear was a similar size to the polar bear, the largest of the living bears. It was found in Europe and Asia.

Cave bear fossils have been found in caves, suggesting that the species lived and hibernated in caves (which is how the species got its name). The size and structure of its teeth suggests that its diet was mainly herbivorous.

Deinotherium was a stone-age relative of today’s elephants. Unlike todays’ elephants, however, its tusks extended from the lower, rather than the upper jaw, and curved downwards. They were probably used to pull branches off of trees, or to dig in the ground for food.

Standing over 4 m / 13.12 ft. tall, and weighing an estimated 14 tonnes / 15.43 short tons, the largest Deinotherium was larger than the African elephant – the largest living land animal. 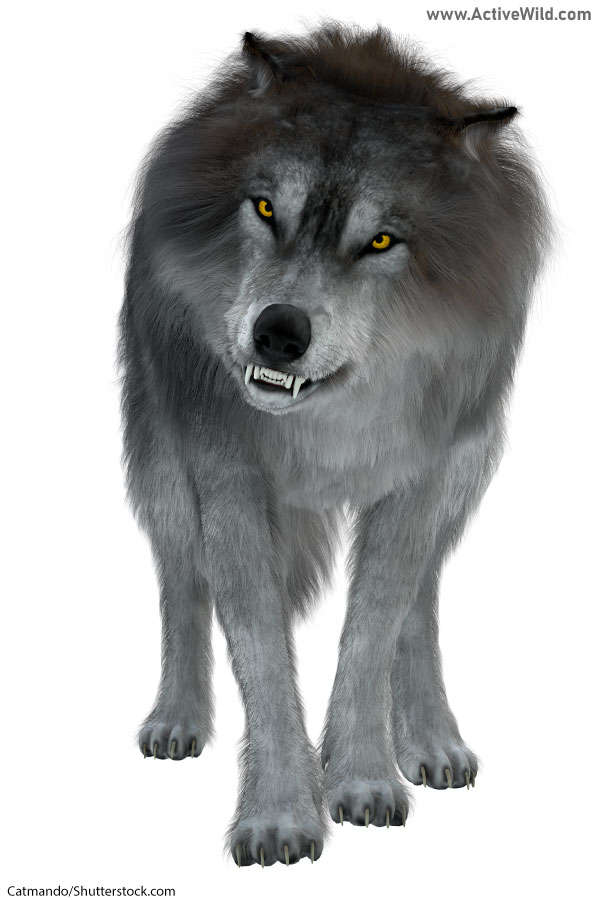 The dire wolf is one of the best-known stone-age animals. It appeared in the Late Pleistocene, and lived up to around 9,500 years ago.

Although a similar size to today’s gray wolf, the dire wolf was slightly heavier, suggesting a stockier body.

The dire wolf’s teeth were larger than those of today’s wolves, and its bite force more powerful than that of any living canid. These may have been adaptations for a hyena-like scavenging lifestyle, but are likely simply have been requirements for taking down large stone-age animals such as mastodons and ground sloths.

The dire wolf is one of many stone age animals to have been found at the La Brea Tar Pits, a fossil hotspot in Los Angeles, USA. 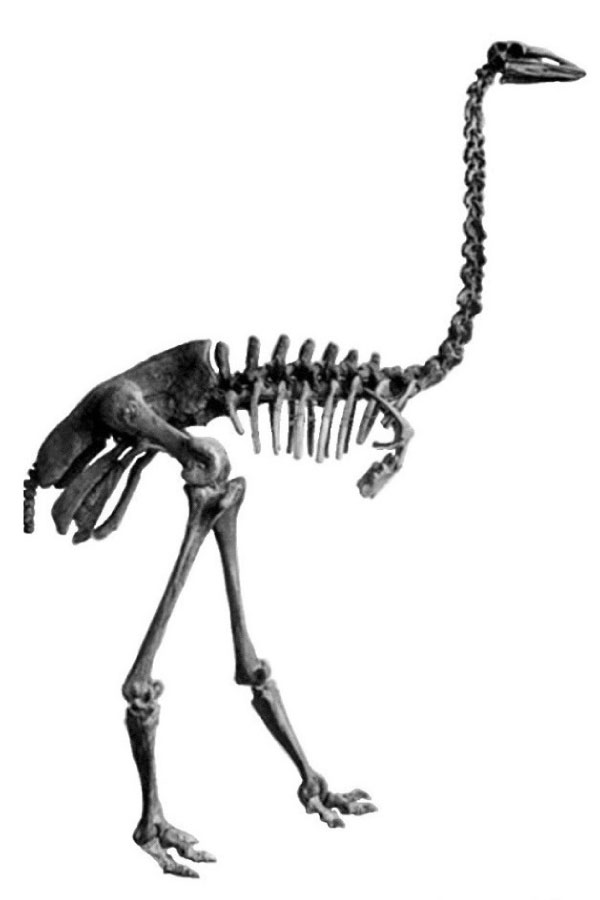 The elephant birds were a family (Aepyornithidae) of flightless birds found in the African Island country of Madagascar. They belong to a group of birds known as “ratites”, which includes living birds such as ostriches and cassowaries.

Elephant birds are thought to have appeared in the Oligocene epoch, and existed until the 17th century.

Glyptodon was a 2.5 m / 8.2 ft. long, stone-age relative of today’s armadillos. The size of a small car, Glyptodon was protected by a rounded, armored shell. Its tail, too, was heavily armored. It belonged to the mammalian group Xenarthra, which contains today’s anteaters, sloths and armadillos.

Glyptodon was herbivorous. Its extinction may have been caused by overhunting by stone-age humans.

Mammoths were a group of mammals in the elephant family that first appeared early in the Pliocene epoch, before the beginning of the Stone Age. Around 10 mammoth species have been identified. They make up the genus Mammuthus.

Mammoths first appeared in Africa, then spread across Europe and Asia before entering North America.

The best-known mammoth is the woolly mammoth Mammuthus primigenius. This species was a similar size to today’s African bush elephant. It had several adaptations for living in the cold, including its characteristic fur, and small ears for protection against frostbite.

The last woolly mammoths lived on Wrangel Island, a Russian island in the Arctic Ocean. They were still alive at the time of the building of the Great Pyramid in Egypt.

Thylacoleo carnifex was a stone age marsupial that lived in Australia. It is the largest of three species of genus Thylacoleo, a group of animals known as the marsupial lions due to similarities in both their appearance and lifestyle to those of today’s lions.

Thylacoleo carnifex was a fearsome animal, the size of a jaguar, with strong fore limbs, retractable claws, and an immensely strong bite force.

Mastodons were Stone Age relatives of today’s elephants. The five currently recognized species of mastodon belong to the genus Mammut and family Mammutidae. They were found in North America, and were less-closely related to living elephants than mammoths.

Smaller than mammoths, but powerfully-built and equipped with long tusks, mastodons were herbivores that inhabited forests.

Hunting of mastodons by stone age humans may have caused their extinction at the end of the Pleistocene epoch.

The Irish elk Megaloceros giganteus was a large member of the deer family Cervidae. It was one of several species of the now-extinct genus Megaloceros. This stone age species was found across northern Europe and into Siberia. It was a similar size to today’s moose and its antlers were larger than those of any other known deer.

Depictions of the Irish elk in cave paintings show it with pale fur, and a dark stripe running along its back and each of its sides. 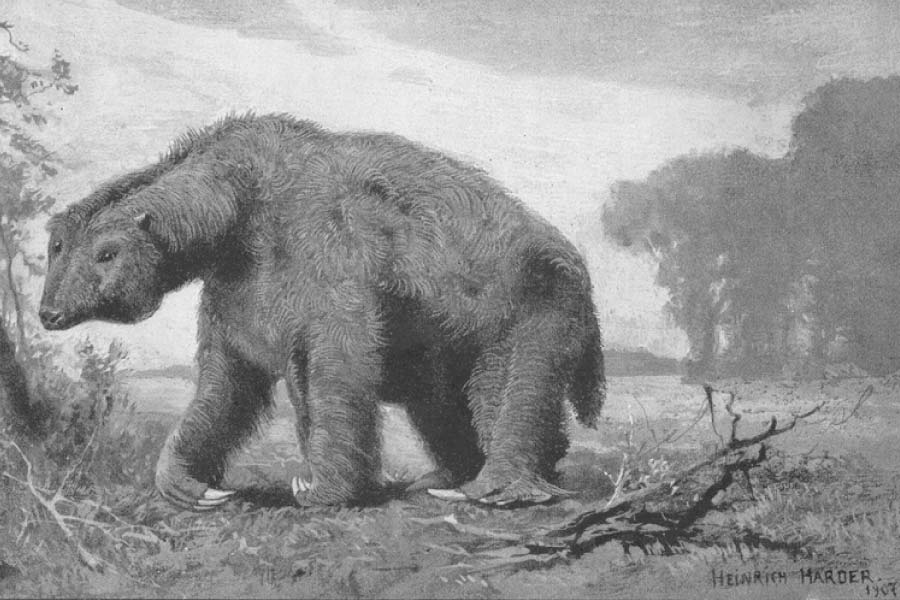 Megatherium was a giant ground sloth that lived in South America. It belonged to the same group, Xenarthra, that contains living sloths, anteaters and armadillos, and extinct animals such as Glyptodon, also included in this list of stone-age animals.

Megatherium Americanum, the largest species of Megatherium, grew to lengths of up to 6 m / 20 ft., and would have weighed up to 4 tonnes / 4.41 short tons.

Unlike living sloths, Megatherium didn’t climb trees; it would simply have pulled branches towards its mouth with its powerful arms. Although Megatherium is often depicted with hair, some paleontologists think that it would have been hairless, like an elephant, to prevent overheating. 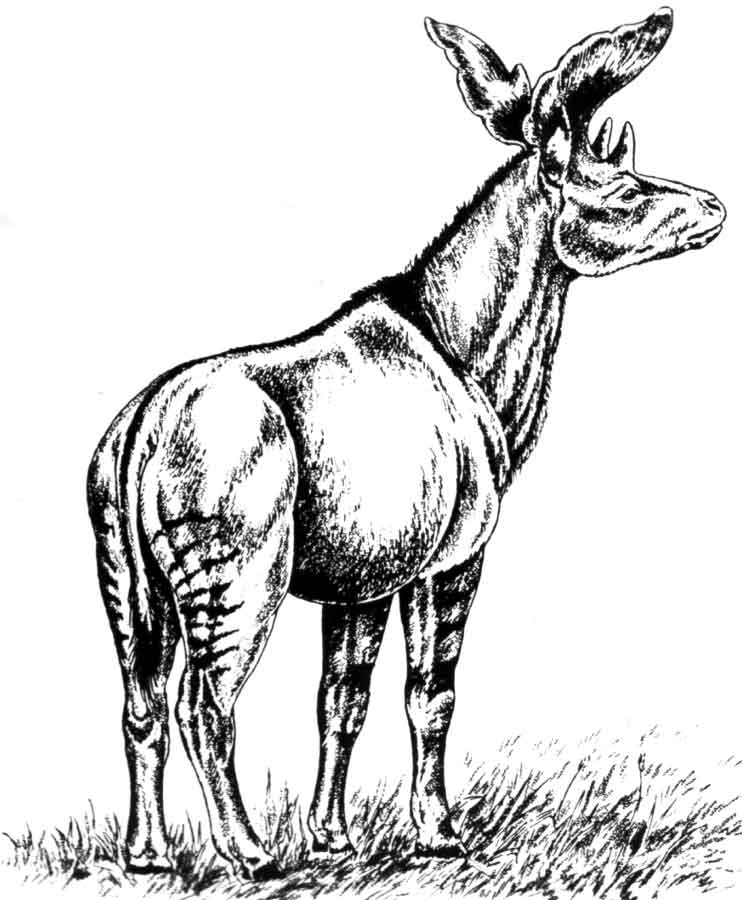 Sivatherium is a genus of extinct animals in the giraffe family Giraffidae. It was found in both Africa and Asia and appeared several millions of years before the beginning of the stone age. It is thought to have become extinct around 800,000 years ago.

Sivatherium resembled a modern okapi, but was significantly larger. It had two pairs of horn-like growths known as ossicones on its head. One pair was large and resembled antlers. 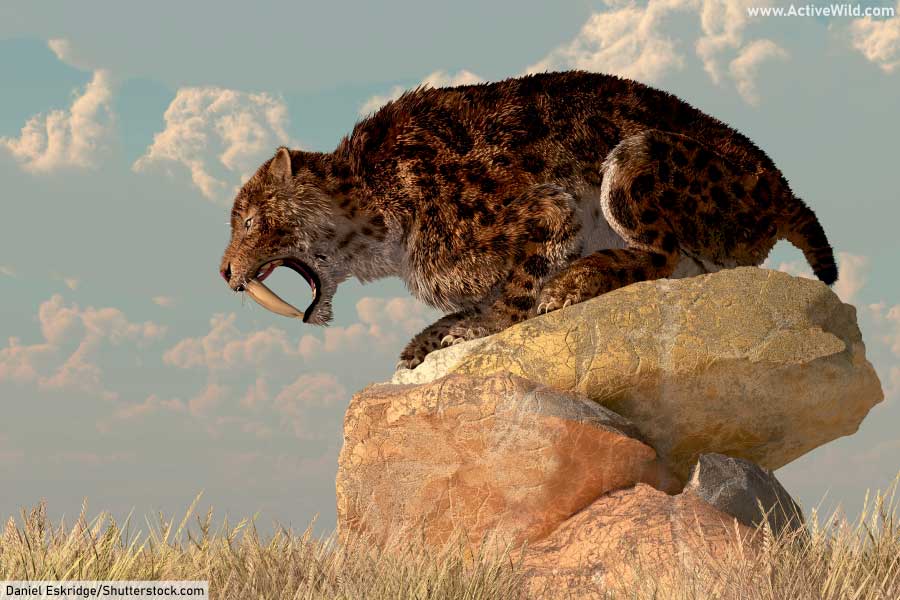 One of the most famous stone age animals, Smilodon was a saber-toothed cat found in the Americas in the Pleistocene and early Holocene. Smilodon populator, a Smilodon species found in South America, may have been the largest ever member of the cat family Felidae ever to have lived.

Smilodon is also known as the saber-toothed tiger, although it is not closely-related to today’s tiger.

Smilodon hunted animals larger than itself, bringing them down with its powerful limbs and claws before delivering a death bite with its long canines. 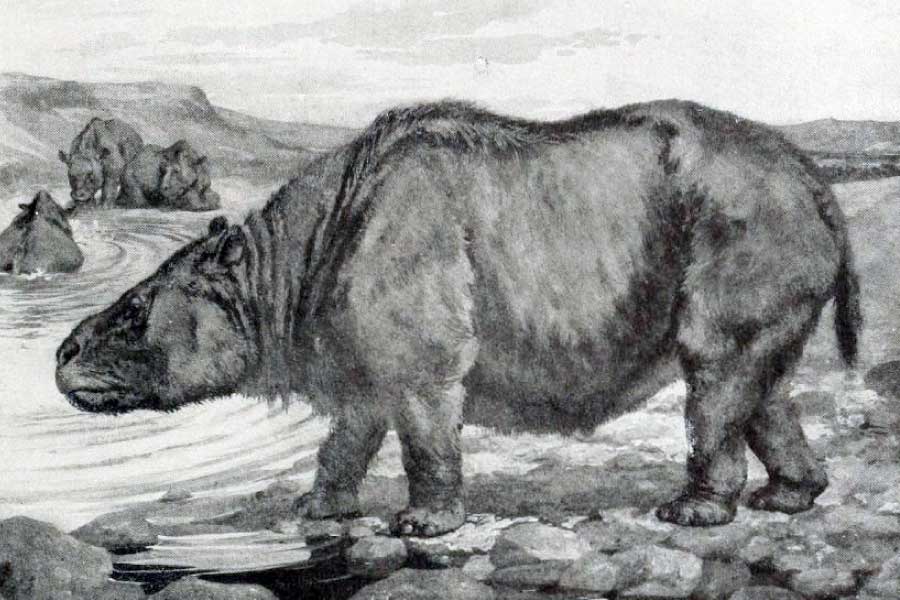 Toxodon was a hippopotamus-like hoofed mammal that lived in South America. It was powerfully-built, with short legs and a barrel-shaped body It would have co-existed with early human settlers for several thousands of years before becoming extinct, possibly due to hunting by humans. Several specimens have been found with arrowheads embedded in them.

The woolly rhinoceros, scientific name Coelodonta antiquitatis, was a stone-age member of the rhinoceros family Rhinocerotidae. It roamed the cold grassland biome known as the Mammoth Steppe that covered much of Europe at the end of the Pleistocene.

A similar size to today’s white rhino, the woolly rhino was covered in hair and had two horns on its nose. The longer front horn grew up to 1.4 m / 4.6 ft in length.

While humans are known to have hunted the woolly rhinoceros, it is thought that a warming climate, rather than hunting, caused the extinction of this cold-climate specialist.

You can discover more amazing prehistoric animals on the following pages:

1 thought on “Animals Of The Stone Age: A List Of Stone Age Animals With Pictures & Facts”