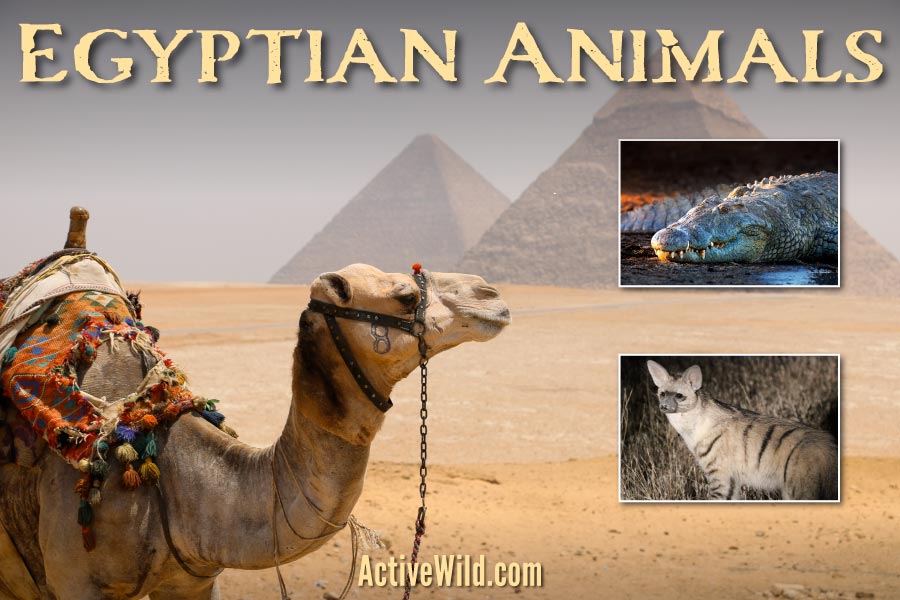 Examples of Egyptian animals include the aardwolf, Egyptian cobra, lappet-faced vulture, Nile crocodile, Nubian ibex and striped hyena. Most of Egypt is covered in desert, and many of the animals that live in Egypt have adaptations for living in this habitat.

Scroll down for pictures and facts on these and many other Egyptian animals.

According to the Egyptian government’s 1998 National Strategy and Action Plan for Biodiversity Conservation, Egypt is home to 15,000 animal species, including 10,000+ insects, 515 birds, 132 mammals, 91 reptiles and 7 amphibians.

Egypt is a country in North Africa. It is located at the northeastern-most corner of Africa, with part of Egypt (the Sinai Peninsula) extending into Asia.

The River Nile flows through Egypt before draining into the Mediterranean Sea, which borders the country to the north. To the east of Egypt is the Red Sea, which separates Africa from Asia.

Egypt’s climate is extremely hot and dry, and the Sahara Desert extends over much of the country. 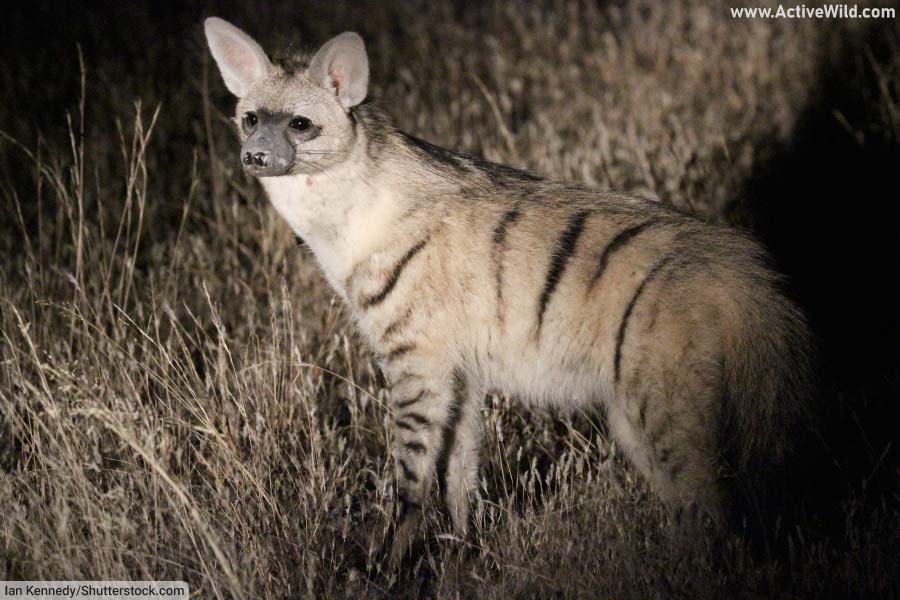 The aardwolf is the smallest of the four members of the hyena family, Hyaenidae. Unlike the other hyenas, the aardwolf doesn’t eat large animals. Instead, the diet of this nocturnal animal consists almost exclusively of termites and other small insects.

Using its long, sticky tongue to gather up the insects, a single aardwolf might eat up to 250,000 termites in one night.

There are two main populations of aardwolves in Africa: one in eastern Africa, one in southern Africa. In Egypt, the aardwolf is found in Gabal Elba, a mountainous region in the south east of the country.

The African wild ass is a critically endangered member of the horse family Equidae. It is thought to be the ancestor of the domestic donkey, and has a strong resemblance to its domesticated cousin.

Any remaining wild asses in Egypt will be found in the mountainous Gabal Elba region in the south-east of the country.

The species has a light brown coat and large, backwards- curving horns. It is found in dry, rocky, mountainous areas across North Africa.

Like many Egyptian animals, the Barbary sheep is able to live in areas with very little water. The Barbary sheep gets all of the water it needs from the plants in consumes. It can go without drinking water for over a year.

The dorcas gazelle is one of ten species of genus Gazella, a group of small antelopes known for their speed. (A number of other antelope species are known as gazelles but do not belong to the genus Gazella.)

The dorcas gazelle is a desert specialist that gets all of the water it needs from the plants that it eats; it can go its whole life without drinking water. The species is found in rocky shrubland and grassland across much of North Africa.

As an adaption for evading its numerous potential predators, including the cheetah, the dorcas gazelle is capable of running at speeds of up to 60 mph / 96.5 km/h.

The dromedary is one of three camel species. All three belong to the genus Camelus, which forms part of the larger camel family, Camelidae, which also includes animals such as llamas and alpacas.

Although the dromedary is the tallest of the three camels, the two-humped Bactrian camel is heavier. (The third camel species is the critically endangered wild Bactrian camel, the only non-domesticated camel.)

The dromedary was first domesticated around 4,000 years ago. Its wild ancestors were native to desert regions of northern Africa and Asia. The species has been the traditional means of transport in the desert regions of Africa and the Middle East for thousands of years, and as a result is one of the most famous Egyptian animals.

This large snake is found in grasslands and savannas.

When threatened, the Egyptian cobra (like other cobras) rears up and widens its neck to intimidate its adversary. Unlike some cobras, it does not spit venom, instead it injects venom via its two needle-like fangs. Its bite is potentially fatal to humans. 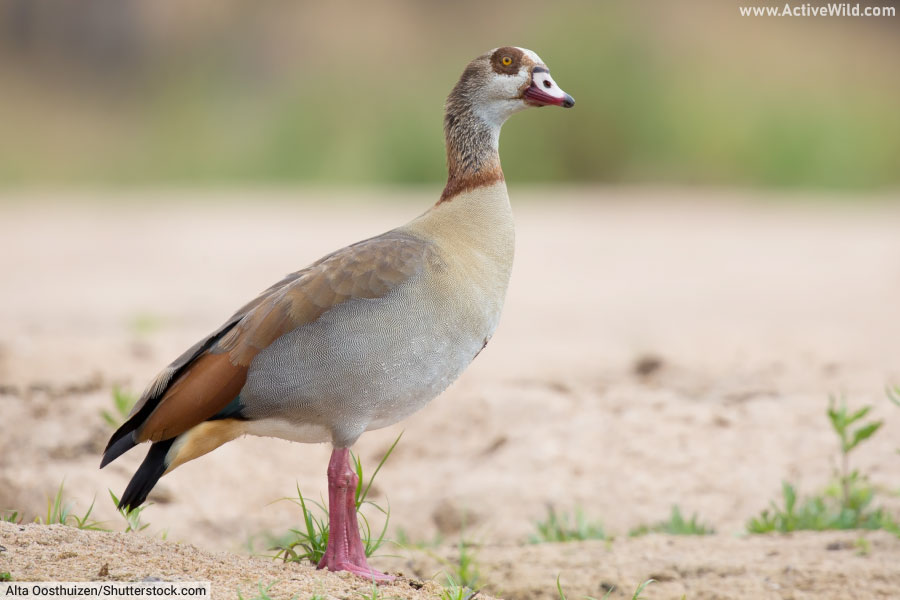 The Egyptian goose is a member of the duck, geese and swan family, Anatidae. Originally found across much of Africa, the species has been introduced to Europe and North America. The species can be identified by its distinctive brown eye patch and white wing patches.

The species is non-migratory and can form flocks numbering thousands of individuals. It is found in grasslands and wetlands and feeds on land plants.

The Egyptian vulture is a distinctive old world vulture with a pale coat and yellow face. It is often seen soaring on thermals in search of food, which consists mainly of carrion (dead animals).

The Egyptian vulture is found not just in Egypt, but also across much of the rest of Africa and also in southern Europe and southern Asia.

Despite its large range, the species is endangered and its population is decreasing. This is due to a number of reasons, including a lack of available food, collisions with wind turbines, and lead poisoning from lead shot being left inside the animals it eats.

The lappet-faced vulture is a huge bird, with a wingspan of up to 2.9 m (9.5 ft.). Like all vultures, it is primarily a scavenger, feeding on carrion that locates while soaring on thermals.

Despite being found across much of Africa, the lappet-faced vulture is an endangered species, with a population of under 6,000 adult individuals. One of the main threats to the species is poisoning by insecticides and other pest-control poisons contained in the meat of the animals it eats. 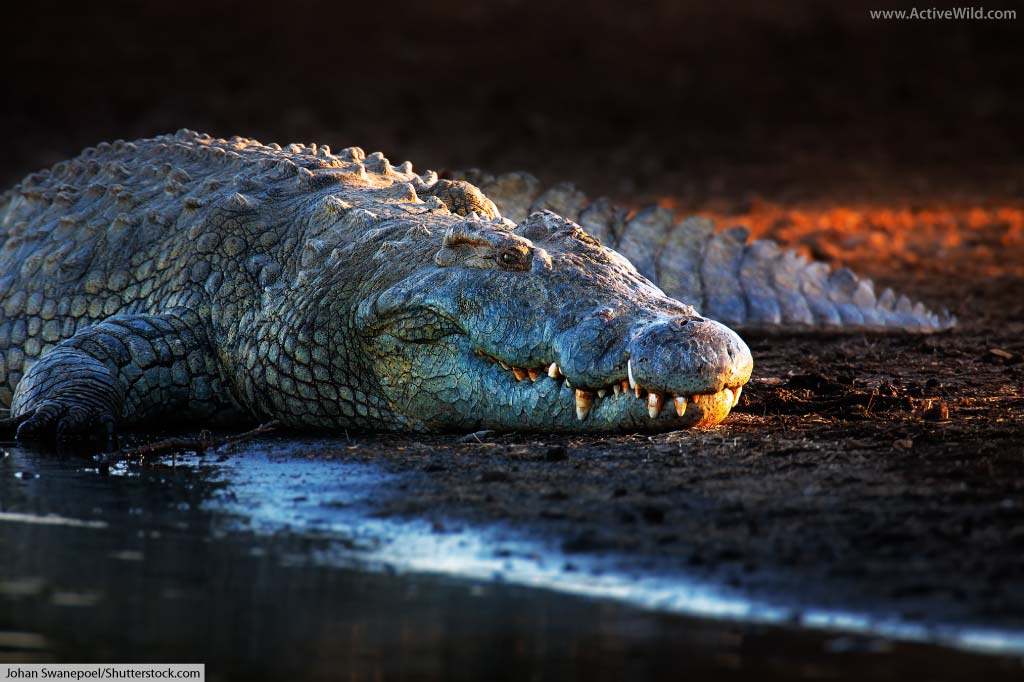 The Nile crocodile is a large, semi-aquatic reptile found in freshwater rivers and lakes across much of Africa. In Egypt it is found only in Lake Nasser, a large, man-made lake formed by damming the Nile.

The Nile crocodile is the largest and most common crocodile found in Africa, and the world’s second-largest crocodilian (after the saltwater crocodile). Male Nile crocodiles (the larger of the sexes) occasionally reach lengths in excess of 5.5 m / 18.04 ft.

Known for its aggressiveness, the Nile crocodile is one of Africa’s most dangerous animals. 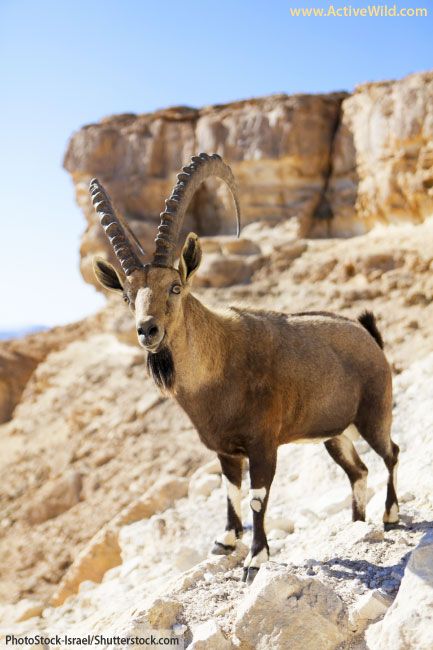 The Nubian ibex is a member of the sheep and goat subfamily Caprinae, which is part of the larger family Bovidae, which also contains cattle, antelopes, and related animals.

The species lives on rocky, dry shrublands on mountains and hillsides. Females live in herds, while males are more independent, only joining herds during the breeding season.

The Nubian ibex is found in Egypt in several locations in the Middle East. It may also be present in Sudan, Ethiopia and Eritrea. Its entire population consists of a maximum of 4,500 adult individuals, and is decreasing due mainly to hunting.

The pale gerbil is one of the few animals that are endemic to Egypt (i.e., it is found only in Egypt, and nowhere else in the world). Like most gerbils, it belongs to the genus Gerbillus, which is part of the mouse and rat family, Muridae.

In the wild, the pale gerbil is found in sandy, coastal and desert habitats. The species is often kept as a pet.

Also known as the slender-horned gazelle or simply rhim, the rhim gazelle is found in desert habitats in North Africa. It has the palest coat of all gazelles. Its thin, ridged horns can reach 40 cm / 15.75 in. in length.

This desert specialist gets all of the water it needs from dew and the plants that it eats. It wanders desert regions in search of vegetation to eat and is even found in the Sahara Desert.

Rüppell’s fox is a member of the dog family Canidae found in desert and other arid (dry) habitats in North Africa, the Middle East and parts of Asia. It has several adaptations for living in deserts, including large ears for keeping cool, and hairy soles for walking and gripping on hot sand.

The crepuscular (active at dawn and dusk) or nocturnal lifestyle of Rüppell’s fox is another adaptation for living in the desert; it spends the hottest part of the day in resting underground in a den.

Rüppell’s fox is significantly larger, and has a darker-colored coat than the fennec fox, another member of the dog family found in Egypt.

The Saharan horned viper is a member of the viper family Viperidae that is found in the Sahara desert and in other desert regions of northern Africa and the Middle East.

The species is a pale, sandy color; an individual’s color often matches the sand of the region in which it is found. Most (but not all) Saharan horned vipers have distinctive horns, one above each eye.

The Saharan horned viper, like other desert snakes, moves primarily by sidewinding. In this method of locomotion, the snake moves sideways by moving its head and following with the rest of its body. In this way it can move quickly over slippery sand.

The striped hyena is one of four members of the hyena family Hyaenidae, and one of two found in Egypt (the other being the aardwolf). It is smaller on average than both the spotted hyena and the brown hyena, but larger than the aardwolf.

The striped hyena is primarily a scavenger, feeding on carrion it finds on the grasslands, savannas and shrublands in which it lives. Occasionally the species will hunt and bring down its own prey.

With a declining population estimated to number fewer than 10,000 individuals, the striped hyena is close to becoming threatened. The species is often deliberately poisoned by humans, who view it as a threat to their livestock and also due to superstitious beliefs.

You can discover more about amazing animals from all around the world on the following pages: