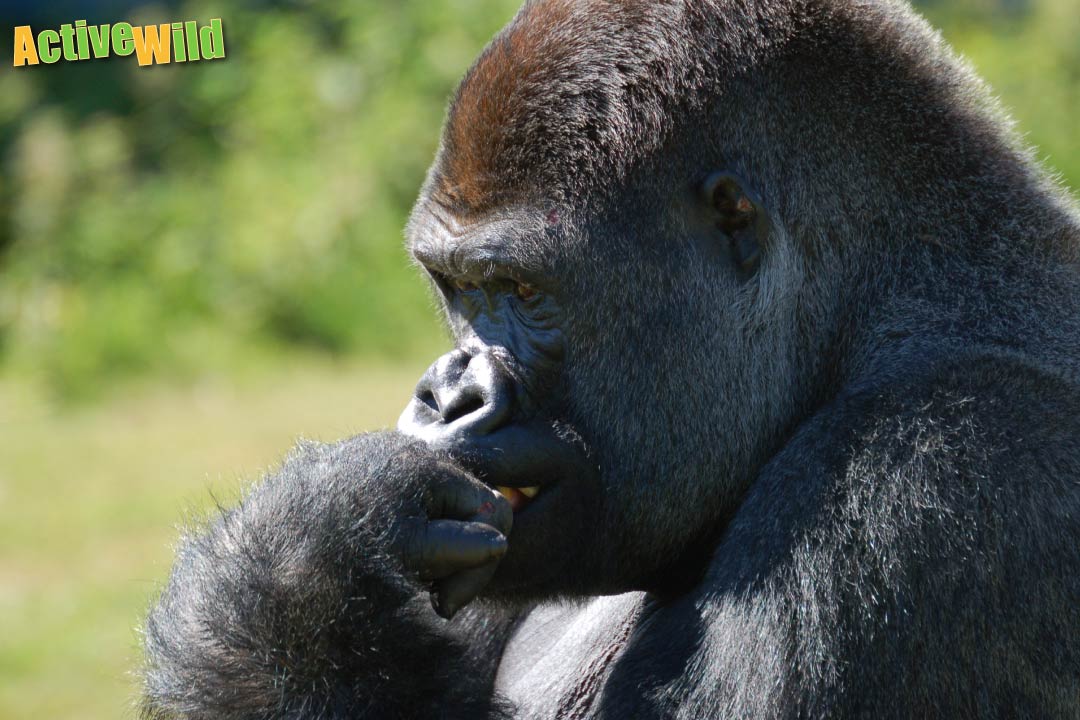 The western gorilla is a critically endangered primate found in the forests of Central Africa. Despite its fearsome appearance, the species is mainly herbivorous. The Cross River gorilla, one of two western gorilla subspecies, is the world’s most endangered great ape.

Read on for western gorilla facts, pictures and in-depth information…

Western Gorilla Facts At A Glance

Both western and eastern gorillas are members of the family Hominidae. Members of this family are known as great apes, or hominids. The other great apes are the chimpanzee, the bonobo, the three species of orangutan and man.

After the chimpanzee and bonobo, the gorillas are our closest living relations. We share between 95 and 99% of our DNA with gorillas!

The western gorilla is a large, powerfully-built animal with long, muscular arms and relatively short hind legs. Its skin is black and leathery. Much of its body is covered with coarse hair that ranges from black to dark brown-grey in color. The forehead can be brown or reddish-brown. The face, ears, hands and feet are hairless.

The gorilla’s face has a protruding brow and a short muzzle with large nostrils.

At around 15 years of age, male gorillas acquire a covering of short, gray-white hair on their backs. For this reason, mature males are known as ‘silverbacks’.

Juveniles up to 4 years of age have a small patch of white hair on the rump.

There is a large difference in size between male and female gorillas, with males being significantly larger and weighing up to twice as much as females. Males can also be identified by their large, sharp canine teeth and the shape of their heads, which are more conical and less rounded than those of the females.

The diet of the western gorilla contains more fruit than that of the eastern gorilla, and it tends to wander further when foraging.

Most of the time the western gorilla walks on all fours. It uses a form of walking known as knuckle-walking, in which the gorilla’s upper body weight is supported by the knuckles.

When the gorilla is threatened or when carrying food it will rise up and walk short distances on its hind feet.

Despite its large size, the western gorilla is able to climb trees. Young gorillas are nimble climbers but adults tend to stick to the main trunk and the biggest branches. Large silverbacks are the least likely members of the troop to be found in trees.

Where Is The Western Gorilla Found?

The western gorilla is found in western Central Africa.

The Cross River gorilla subspecies is restricted to a small area which spans the border of Nigeria and Cameroon, in the vicinity of the Cross River.

The Cross River gorilla occurs in rough terrain in remote montane forests at elevations of up to 1,900 m (6,200 ft.).

The western gorilla lives in groups of 5 to 15 individuals known as ‘troops’. A typical troop consists of a male silverback, several adult females and their young. Larger troops may also contain one or more younger males, known as ‘blackbacks’.

The silverback leads the troop and protects it from predators such as leopards. It will also behave aggressively towards other males, who offer a potential threat to the troop’s infants.

A male gorilla’s threat display involves standing upright, chest beating, tearing at vegetation and growling loudly. He may also charge at his opponent. Although actual fighting is rare, it can result in the death of one of the combatants – a silverback will defend his troop with his life.

The species is not territorial, and the home of one troop may overlap with that of another.

The western gorilla is active during the day, spending its time both foraging for food and resting. During the night it sleeps in a nest made from vegetation. Gorilla nests are usually built on the ground. Infants share their mother’s nests until they are weaned.

Female western gorillas usually begin to reproduce at around 10 years of age. Males have to wait until they acquire ownership of a troop before they get the chance to mate. This usually occurs at 15 years of age, when the characteristic ‘silverback’ hair appears.

Males who haven’t yet acquired troops of their own may either live alone or in ‘bachelor groups’.

There is no distinct breeding season; females become receptive for two to three days each month. The gestation period for a western gorilla is 256 days / 8.5 months. The female typically gives birth to one infant, although twins occasionally occur.

A new-born gorilla weighs from 1.8 to 2.3 kg (4 to 5 lb.) and has a sparse covering of hair. At first, the infant is entirely dependent upon its mother. It will have started crawling and clinging to its mother by 3 months of age. An infant gorilla grows around twice as fast as a human baby.

The female nurses and carries her infant for 3 to 4 years.

A troop’s silverback may often be seen playing with the group’s infants. He will even look after an infant if its mother dies.

What Do Western Gorillas Eat?

The western gorilla’s diet consists mainly of plant matter. Its preferred food is fruit, which it may travel up to 4 km (2.5 mi) per day in search of, but it also eats leaves, shoots, nuts and bark.

The western gorilla forages for food both on the ground and in trees. Adult males consume roughly 32 kg (45 lb.) of food every day.

An adult western gorilla is a large and formidable opponent and has few, if any, predators. In normal circumstances only the leopard would pose any kind of threat. Gorilla infants are more vulnerable to predation, and may be targeted by animals such as birds of prey, crocodiles, leopards and other large cats.

Is The Western Gorilla Endangered?

The western gorilla is rated ‘Critically Endangered’ by the IUCN.

The western lowland gorilla subspecies has an estimated population of around 316,000 individuals.

The Cross River subspecies faces a high risk of extinction. Surveys carried out between 1990 and 2015 found that fewer than 250 individuals were left in the wild.

The populations of both subspecies are decreasing.

Threats to the western gorilla include: