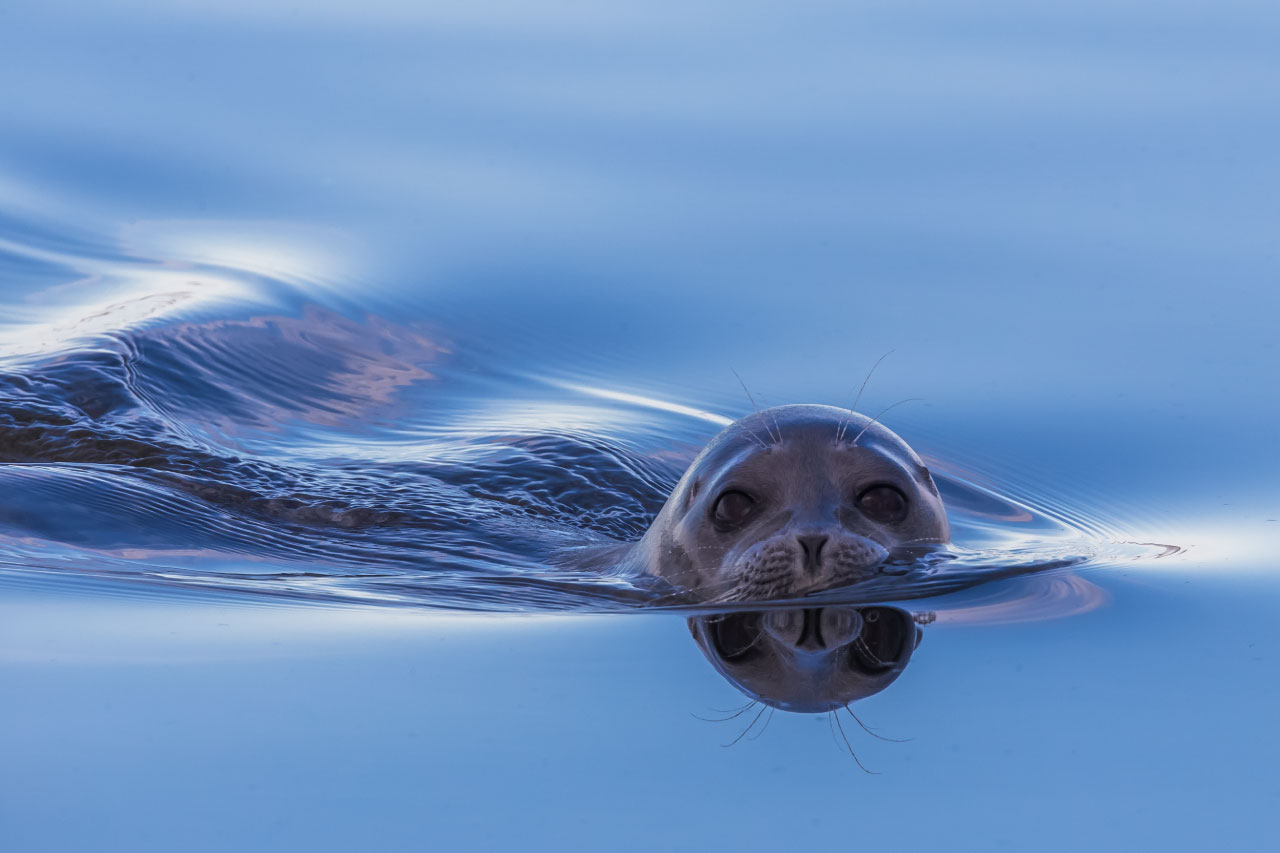 The ringed seal is the most common seal in the Arctic. Rarely venturing onto land, the species spends most of its time either hunting in the cold Arctic waters, or ‘hauled out’ on the ice.

This page contains ringed seal facts, pictures and in-depth information on the species’ lifestyle. Read on to find out more about this Arctic marine mammal…

Ringed Seal Facts At A Glance

The ringed seal is the most common seal in the Arctic. It is one of several ‘ice seals’; seals whose entire life-cycles take place on ice rather than on land.

The ringed seal is a member of the earless seal family, Phocidae. Members of this family, who are also known as ‘true seals’, lack visible external ears.

Unlike eared seals (i.e. members of the family Otariidae – the sea lions and fur seals), earless seals are unable to reverse their hind flippers when walking on land. Although this makes them less agile on land, the earless seals swim in a more efficient manner, and are often able to forage further from land than the eared seals.

Pusa, the genus to which the ringed seal belongs, also contains two other closely-related seal species: the Caspian seal and the Baikal seal.

* Subspecies are members of the same species that are found in separate areas and which often exhibit slight physical differences.

The largest subspecies is the Baltic ringed seal; the smallest is the Ladoga ringed seal.

The ringed seal gets its name from the distinctive pattern of pale gray, ring-like markings present on the otherwise dark grey of its back. The undersides are light gray.

The species has a plump body, small head and short snout. With an average length of around 1.5 m (5 ft.), it is one of the smallest true seals. Males are slightly larger than females.

The claws of the ringed seal’s fore flippers are over 1 inch (2.5 cm) in length and sturdily-built. Using these, the seal is able to dig holes in the thick Arctic ice.

Due to its ability to create breathing holes in thick ice, the ringed seal is able to occupy areas in which other seal species would be unable to survive.

Where is the Ringed Seal Found?

The ringed seal is found throughout the Arctic Ocean and adjacent seas, from around 35°N to the North Pole. The species also makes its way into freshwater lake and river systems, and is present in Russia’s Lake Ladoga and Finland’s Lake Saimaa (both of which are freshwater).

Vagrants are occasionally sighted further afield; the species has been spotted both in Portugal and New Jersey, USA.

The ringed seal uses both seasonal and permanent ice on which to breed, molt and rest. It is usually seen on large ice floes of at least 48 m (157 ft.) in diameter.

Most ringed seals spend most, if not all, of their lives on the ice, rarely venturing onto land. Only the Lake Saimaa, Lake Ladoga, and Baltic Sea subspecies haul out (come ashore) onto rocks and island shores in the absence of seasonal ice.

From mid-May to mid-July, the ringed seal undergoes a seasonal molt. During this time, it feeds less and spends much of its time hauled out.

The ringed seal is usually solitary and avoids other seals outside of the mating season. The Ladoga ringed seal is an exception: this subspecies has been observed hauled out in groups during the ice-free period.

The size of a ringed seal’s home range varies. Females tend to have larger home ranges than males, and both sexes travel less far in winter when ice restricts their movements.

The ringed seal builds snow caves on the ice. These provide protection from both the elements and from polar bears, who are a principal predator of the seal. A single seal will often build two or more lairs, dividing its time between them.

Mating takes place in the spring between late April and May. During this time, male seals engage in territorial behavior and become more aggressive and vocal. Their facial glands secrete a strong-smelling oil which makes their faces appear darker. (Indigenous people avoid hunting the seals at this time due to the unpleasant odor.)

Males often wait for females by the main breathing holes for a chance to mate.

Females give birth to a single pup in late winter or early spring, after a nine-month gestation period. The birth typically takes place in one of the seal’s snow caves.

The newborn pup weighs around 4.5 kg (9.9 lb.) and is covered in lanugo (a woolly coat) which is replaced within 3 weeks.

The female lactates for 5 to 7 weeks after the pub is born. Her milk is rich in fat and allows the pup to double its weight during this time.

Before the pup is weaned, the female moves it between several (typically 4 to 6) different lairs. The pup is taught to swim by its mother during its first week of life.

Diet: What Do Ringed Seals Eat?

The ringed seal is a carnivore whose diet comprises a variety of fishes and invertebrates. Prey tends to be small, and schooling fish species appear to be preferred. The ringed seal typically hunts alone.

The seal eats more in the fall in order to build up fat reserves in preparation for winter.

While on the ice, the ringed seal tends to stay close to its breathing hole. This allows the seal to make a quick escape if danger threatens. The use of multiple lairs offers additional protection from predators.

Is The Ringed Seal Endangered?

The ringed seal is rated ‘Least Concern’ by the International Union for Conservation of Nature (IUCN).

The species is widely distributed in the Northern Hemisphere and has an estimated total population size of over 3 million individuals.

A number of ringed seal subspecies are geographically restricted with low populations. The Ladoga ringed seal is considered ‘Vulnerable’ and the Saimaa ringed seal ‘Endangered’.

The Ladoga ringed seal is affected by net fishing, poaching and industrial pollution.

The Saimaa ringed seal is affected by net fishing as well as by boating, tourism, and shoreline development.

Because the ringed seal is heavily dependent on ice (especially to raise its young), global warming may pose the greatest threat to the species as a whole.