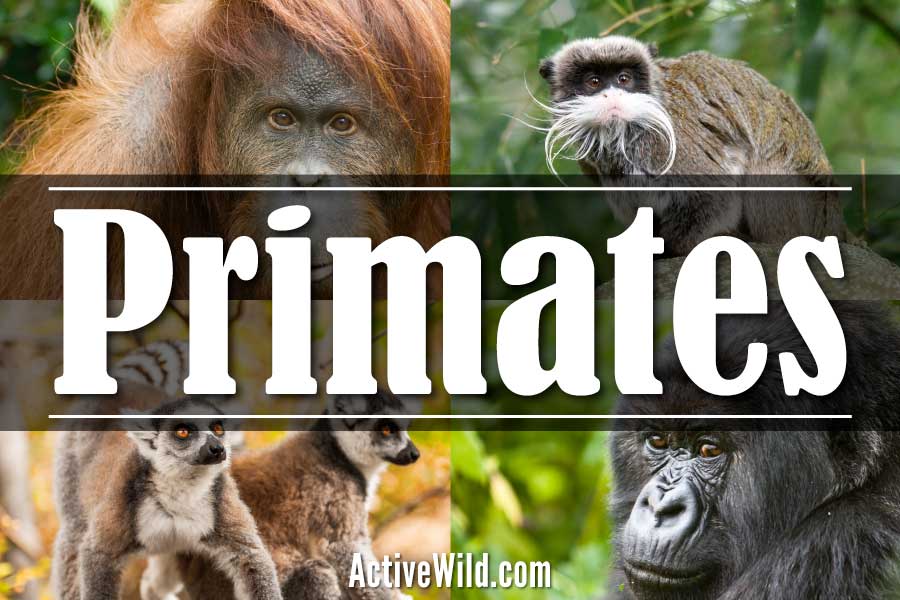 Primates are mammals in the order Primates. Modern primates include bushbabies, lorises, lemurs, tarsiers, monkeys, and apes (including humans). Primates evolved from forest-dwelling ancestors and have adaptions for an arboreal (tree-dwelling) existence, including flexible shoulders and dextrous hands.

Members of the order Primates range in size from the tiny Madame Berthe’s mouse lemur (Microcebus berthae), which weighs 1 oz (30 g), to the eastern gorilla (Gorilla beringei), which weighs in at over 440 lb (200 kg).

There are around 300 different species of primate, making Primates the third most diverse group of mammals (after rodents and bats).

The scientific study of primates is known as primatology. The subject is of particular interest to us because Primates is the order to which humans belong. Humans share many characteristics with the other primates, and much primate research has been conducted in order to understand our own origins on Earth.

You can find out more about primates on these pages: 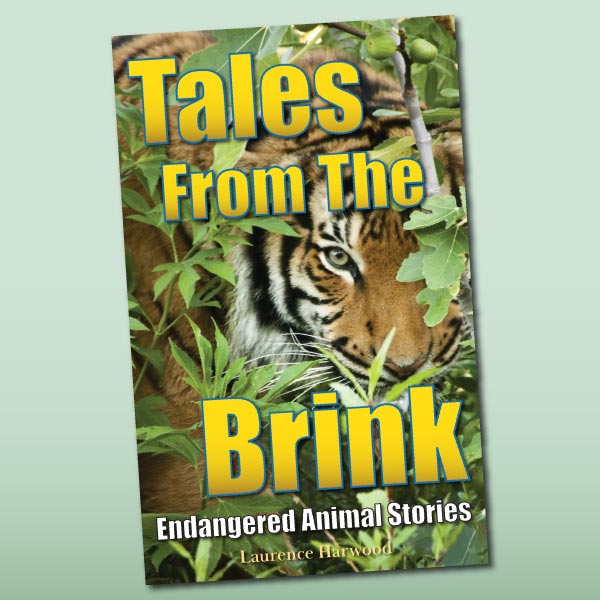 Primates have large brains relative to their body size and are known for their high intelligence. They evolved from tree-dwelling ancestors and show many adaptations for an arboreal existence. They have dextrous hands, and opposable thumbs and big toes, which help to grasp branches. They also have special nerve endings in their hands and feet that increase the sensitivity of these organs to touch.

The shoulders and hip joints of primates are flexible, to allow swinging and climbing through trees. Unlike other mammals, primates have a clavicle (collar bone) that is very important for arboreal locomotion: while a primate is swinging along below a branch, placing one hand after the other, the clavicle prevents the shoulder joint from collapsing. This form of locomotion is called brachiation, and primates can only do this effectively because of the presence of a clavicle in each shoulder.

Primates have eyes that face forwards. This condition is often found in predators, and is associated with stereoscopic vision. When eyes face forwards, the two fields of view overlap slightly, and allow the animal to judge depth (see in three dimensions). This is crucial for a predator that has to judge, accurately, the distance to its moving prey.

Primates are not predominantly predators, but they do have to judge the distance to the next branch or tree while leaping and swinging at high speed through the forest. Their stereoscopic vision enables them to do this without making mistakes.

Many mammals are more dependent on their sense of smell than they are on their eyesight for perceiving information about their environment. In primates, the sense of smell has become less important and has been replaced by excellent vision.

Well-developed vision is another adaptation to life in the treetops, where scents rapidly dissipate into the air. Primates use their eyes to locate food, to watch the behaviour of others, and to locomote effectively through the forest.

Bushbabies are found only in Africa and lemurs are native to Madagascar. Lorises occur in India and southeast Asia. These three groups of primates are considered to be more primitive, being reminiscent of early insectivores. They are mostly nocturnal, and are still dependent on a strong sense of smell; they communicate using scents containing pheromones (airborne hormones).

Tarsiers are the only truly carnivorous primates, and are found in southeast Asia. They also have a well-developed sense of smell.

Monkeys have long tails and relatively large brains. They depend on their excellent eyesight to make sense of their environment.

Apes, by comparison, have no tails. Apes are Old World species, found only in Africa (gorillas and chimpanzees) and Asia (orangutans and gibbons). Apes are considered the most intelligent of the primates and are also the most familiar to us because of their close genetic relationships to humans.

Fossils of primates have been found on all continents, excluding Australia and Antarctica. The oldest known examples were small, marmoset-like creatures with long tails. Their fossils have been found in North America, Asia and Europe, and date from around 55 million years ago.

Even at this very early stage, these species showed several of the features that are characteristic of modern primates. This, along with recent molecular studies, has led scientists to propose that the primates initially diverged from their mammal ancestors as much as 80 million years ago.

There is, unfortunately, no fossil evidence of the very early species yet. The primates underwent adaptive radiation during the Eocene Epoch (55-35 million years ago) and, by the end of this time, species representing all the main groups of primates had evolved.

Lemurs are found only on the island of Madagascar, which lies off the east coast of Africa. However, fossils of lemurs have been found both on the African mainland and in Pakistan. Since Madagascar broke away from the mainland about 88 million years ago, it has been hypothesised that lemurs arrived on the island more recently, by means of rafts of floating vegetation.

In the past 20 to 30 million years, lemurs have diversified into around 100 different species on the island.

There is no fossil record of monkeys that occurred in South America. The ancestors of modern New World monkeys such as spider monkeys and howler monkeys are thought to have colonized South America about 40 million years ago, by crossing the Atlantic from Africa, on rafts of floating vegetation.

There is much speculation in explaining the origins of primates, and it is clear that more fossil evidence is needed to fully understand primate evolution.

What Do Primates Eat?

Most species of primates live in trees in tropical regions of the world. However, a few live in unusual habitats, such as high mountains and arid savannas. Their food consists of leaves, fruits, flowers and seeds, which they locate by visiting the canopies of the trees.

Those species that have become terrestrial, such as baboons, are often omnivorous, and include insects and small vertebrates in their diet.

Some primates have more specialized diets: tarsiers are predators, consuming insects, lizards and bats; gelada baboons eat mostly grass; and certain marmosets and lemurs include tree gum in their diets.

The fact that primates eat a range of plant foods has enabled them to adapt more easily to life in different habitats.

Primates exhibit a variety of locomotion styles, usually dependent on the habitats in which they live.

Lemurs and bushbabies often leap from tree to tree, while lorises move more slowly and stalk their prey. Monkeys may leap or swing, and – along with gibbons – are really the athletes of the forest.

Terrestrial monkeys, such as baboons, walk on all four feet and really only climb trees to be safe from predators at night. The apes, for example gibbons, orangutans and chimpanzees, climb trees too, and are able to move along the branches by brachiating.

Gorillas spend most of their time foraging on the ground and walk with a quadrupedal gait, using their knuckles to support them. Gorillas and chimpanzees use bipedal walking often and are comfortable standing upright.

Tool Use By Primates

Several primates have been recorded using tools to help secure food. These tools are of a simple nature, such as the stone used by a crab-eating macaque to smash the shell of a mollusc, or the stem poked into an ant’s nest by a chimpanzee, in order to collect a row of tasty ants.

Some primates have even been seen to make their own tools. In captivity, apes can be taught to recognise objects and to communicate with zoo keepers. This is evidence of the superior intelligence of these mammals.

Some primate species, such as orangutans, live a solitary existence; they forage alone and only meet up with others for the purpose of mating. Gibbons typically form pair bonds, and live together with a partner, rather than in a group.

Most primates, however, live in groups, and show complex types of social organisation. Sometimes the groups consist of a single male with associated females, such as in gorillas; or a single dominant female, with associated males and young, such as in some species of tamarin monkeys.

The social groups of chacma baboons, hamadryas and geladas contain multiple males and females, often numbering hundreds of individuals. In such societies, the relationships are complex and there is a balance between co-operation and competition.

Social groups benefit individuals by giving protection from predation, and helping to secure mates. However, there will always be competition between group members when it comes to getting access to food.

Within any group, communication between members is important, and primates use a variety of vocalizations, including grunting, hooting, singing and howling, as well as facial expressions, to pass on information. They also groom each other, as a way of reinforcing social bonds, and removing parasites. Some lemurs and lorises even have a special row of front teeth, known as a toothcomb, that is used to groom themselves and others.

There are many ways in which people interact with other primates. Often, primates are a tourist attraction and bring revenue to a country. In India, rhesus macaques are considered holy in Hindu mythology and people feed them and allow them to roam the streets in urban areas.

In many African countries, people hunt and eat primates, and may sell captured primates to pet shops as part of the trade in exotic pets.

Each year, thousands of primates are used in laboratories across the world, for experimentation and in the development of medicines. And more than 30 primates have been sent into space, in order to test the biological effects of space flight.

More recently, human populations have increasingly come into conflict with wild primates because humans have expanded into the natural habitats of these creatures. Deforestation, agriculture and exploitation of forests for wood, have all resulted in habitat loss for primates.

It is estimated that 60 percent of the world’s primate species are currently threatened with extinction. This is a sad indictment of human greed and insensitivity, considering that we share a common ancestor with all these primates, and that they are our closest genetic relatives.