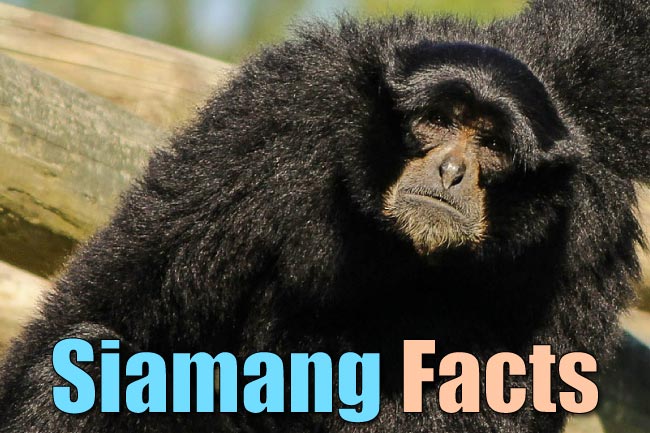 Siamang facts, pictures and video. Discover the world’s largest gibbon, an endangered species found in the rainforests of Southeast Asia. Be sure to watch the video featuring the siamang’s famous call!

Siamang Facts At A Glance

The siamang is a gibbon (see below) found in Southeast Asia. It is the largest species in the family Hylobatidae, and grows up to twice the size of other gibbons.

Members of the primate family Hylobatidae are known as gibbons. Gibbons are also known as ‘lesser apes’. They are smaller than the great apes and, unlike their relations, don’t make nests. Gibbons are incredibly agile and among the animal kingdom’s very best climbers, swingers and jumpers.

The siamang is the only species in the genus Symphalangus, whose name is derived from the Greek words for together (sym) and finger (phalanx). The name refers to a membrane (an area of skin) that joins the siamang’s 2nd and 3rd toes.

(Want to know more about terms such as ‘family’, ‘genus’ and ‘kingdom’? Check out our article on Animal Classification.)

One of the siamang’s most distinctive features is its ‘gular sac’. This is a large throat pouch that helps to amplify the gibbon’s calls (which you can hear for yourself below). The siamang’s fur is also longer and darker than that of its gibbon relatives.

(You can clearly see the siamang’s gular sac in the photo below.)

The siamang has long, slender arms, and, like all apes, lacks a tail. (The lack of a tail is the fastest way to tell an ape from a monkey; nearly all monkeys have tails.)

The only parts of the siamang’s body not covered in long fur are its face, palms, fingers and the soles of its feet. The siamang’s big toe is prominent, and separate from the rest of the toes.

The siamang has a short muzzle and its chin and mouth are gray in color. Both males and females have long canine teeth. Young siamangs are completely black.

Siamangs from Sumatra are slightly larger in size than those from Malaysia. Due to this and slight differences in behavior, some zoologists regard them as subspecies.

You can listen to the siamang’s calls using the player below.

The siamang is found in three Southeast Asian countries: Indonesia, Malaysia and Thailand.

The siamangs of Indonesia are found in the Barisan Mountains in the west-central parts of Sumatra. (Indonesia is a country made up of many different islands, including Sumatra.)

In Malaysia, the species is present in the mountains south of the Perak River in the Malay Peninsula. Siamangs are also found in a small area of southern Thailand.

You can find these locations using the interactive map below:

The siamang is found in a variety of forest types, ranging from semi-deciduous forest to tropical evergreen forest. The species favors areas that are abundant in fig trees. It occurs in both lowland and mountainous areas up to an altitude of 1,500 m (4900 ft.).

The siamang is an arboreal (tree-dwelling) species that inhabits all levels of the canopy. It spends the majority of its time in the mid-upper canopy and retreats to the highest trees to rest and sleep.

The siamang lives in small family groups. These typically consist of a dominant male and female and their offspring. The groups will also occasionally include other adults.

Each group establishes a home range between 15 and 47 ha (37 to 116 acres) in size. The groups are territorial, and will defend most of their home range from neighboring groups.

The siamang is active during the day. Over half of its waking period (which starts at dawn and ends just before dusk) is spent resting. The animals will also forage, travel, play and groom each other. Grooming is an especially important social activity.

Siamangs communicate with each other in various ways, including facial expressions, body postures and gestures.

Physical aggression, such as males chasing each other and biting, may occur when the animals engage in territorial disputes. However, the loud call of a siamang – amplified by its large throat sac – is its primary means of defending its territory.

Vocal communication is particularly important among siamangs. Mated pairs typically vocalize together in the morning. Their calls advertise their presence to other nearby groups. The activity also serves to strengthen the pair’s bond (newly formed pairs have been observed to spend more time calling). Sometimes branch shaking and swinging also accompany the calling.

The siamang uses its long, strong arms to swing from branch to branch, a mode of movement known as ‘brachiation‘.

The siamang is typically monogamous (i.e. it has a single partner). Pairs usually mate for life, although in Sumatra some females have been observed mating with multiple males.

Every 2 to 3 years, the female gives birth to a single infant (rarely twins) after a gestation period of around 7 months.

The infant clings to its mother’s belly for the first 3 to 4 months of its life. The father will start to carry the infant once it reaches 1 year of age. Any older offspring still present will also occasionally assist in caring for their infant sibling.

What Do Siamangs Eat?

The siamang is primarily a herbivore (plant eater) and eats various types of vegetable matter. The siamang’s diet is known to include at least 160 different plant species, ranging from woody plants to vines.

The siamang prefers to eat fruit, but will switch to a higher proportion of leaves if necessary. It may also consume flowers, insects and bird eggs.

Depending on the availability of different types of food, 20 to 50% of the animal’s diet may consist of fruit (especially figs) and 40 to 65% of young leaves.

Is The Siamang Endangered?

The siamang is rated ‘Endangered‘ by the IUCN.

The species occurs in many protected areas and is also fairly adaptable to changes in its environment. However, this hasn’t prevented a steep and continued decline in siamang numbers.

The main threats faced by the siamang are:

Habitat loss: Much of the remaining forest habitat in the siamang’s range is fragmented. Forests have been lost due to road building, expansion of agriculture (including palm oil and coffee plantations), illegal logging and hydroelectric schemes. Forest fires have also destroyed large parts of the species’ habitat.

Illegal pet trade: The siamang is the most popular gibbon species in the illegal pet trade. The collectors typically target infants, which also puts the mothers in danger.