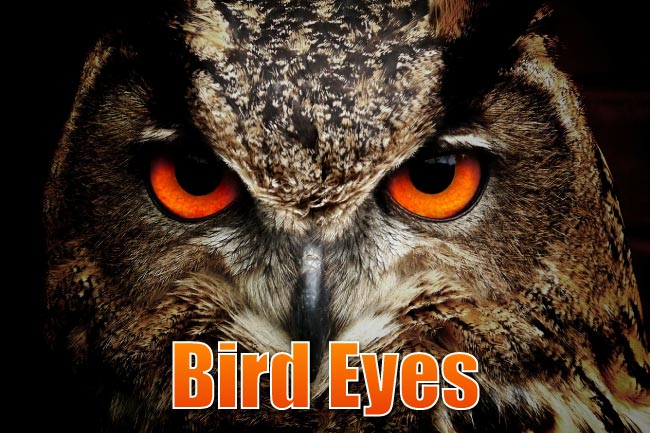 Birds are well-known for having good eyesight. Even before scientists began to examine bird vision, phrases such as ‘hawk-eyed’ were used to describe people who could see long distances. On this page, we’ll find out all about bird eyesight, and discover how birds see the world.

Bird Vision – How Good Is A Bird’s eyesight?

Birds of prey such as kestrels are famous for their ability to spot tiny prey animals from high above the ground. One study (Fox et al, 1976) found that the American kestrel can see a 2mm insect at a range of 18 meters.

It’s not just being able to see long distances that birds are known for. Owls can fly at high speed through forests at night. Ducks can spot a predator approaching from behind just as well as if it was approaching from the front.

Most birds are reliant on the sense of sight in order both to find food and to stay alive.

Birds have relatively large eyes compared to mammals. In general, birds’ eyes are around twice the size (relative to body size) than those of mammals.

The relative size of a bird’s eyes varies from species to species. The birds with the largest eyes relative to body size are eagles, falcons and owls.

The eyesight of birds of prey is among the best of all birds (and therefore of all animals).

Some eagles have eyes that are almost as large as the ostrich’s, despite their bodies being far smaller. Birds of prey have eyes 1.4 larger than those of an average bird (in proportion to body size).

Eyes are large, heavy organs. They take up a large amount of room in a bird’s skull. (You can see the back of an owl’s eyes through its earholes!) The fact that flying animals such as birds carry around these heavy organs shows just how important they are to their lifestyles.

The wedge-tailed eagle of Australia has the largest eyes in relation to body size of all birds. It also has the greatest visual acuity (i.e. the clearest, or ‘best’ vision) of all animals.

Not all birds have large eyes. Kiwis have tiny eyes. These flightless birds rely on smell to locate food. Hummingbirds have the smallest eyes of all birds.

We can look in different directions without moving our heads – we just move our eyes. Birds’ eyes don’t more around in their sockets as much as ours. This is probably due to the fact that a bird’s eyes are simply so large that there is limited room in the skull to allow for any movement. As a result, birds are constantly having to move their heads in order to gauge distances.

The rods are more sensitive to light than the cones and are therefore useful for seeing in low-light conditions.

Most birds are diurnal (i.e. active during the day). As a result their eyes have more cones than rods. Birds that are active at dusk and night – such as owls – have more rods.

The large physical size of an owl’s eye also helps it to see in low-light conditions. In daylight, owls and pigeons have similar vision. In poor light, however, the owl’s light-sensitive eyes are far more effective.

An owl’s eye is designed for light sensitivity rather than clarity. In actual fact, owls rely on their hearing more than their eyesight to locate prey.

Falcons, shrikes and kingfishers, and other birds known to have particularly good eyesight, have two foveas. The fovea is an area at the back of the eye in which photoreceptor cells are most densely-packed. The fovea is the part of the retina in which the picture is sharpest.

Other Adaptations For Good Eyesight

The asymmetrical structure of a bird’s eye enables it to keep both the horizon and the ground in focus at the same time. However, compromises have to be made. This adaptation does mean that many birds are, in general, a little near-sighted.

It’s not just a bird’s eyes that help it to see. Large areas of a bird’s brain are given over to processing visual information. Birds can see rapid movement better than humans. This is useful for flying at high speeds among trees.

Birds, however, have four types of photoreceptor cell; not only can they see red, green and blue, but they also have photoreceptors that are sensitive to ultraviolet light.

It is thought that most birds can see ultraviolet light. This provides birds with a whole new layer of visual information.

The plumage of many birds reflects ultraviolet light. Birds that to us look rather drab may look far more colorful to other birds.

Sleeping With One Eye Open

Birds sleep with one eye open. This allows them to rest one side of their brains at a time, while keeping an eye out for predators. Some birds are even thought to sleep while flying – and keeping one eye open is likely to be necessary in order for them to be able to do this.

You can usually tell what kind of a lifestyle a bird leads by the position in which its eyes are located in its head.

The eyes of most birds are positioned at the sides of their heads. Most birds can see to the sides better than to the front, and can’t see behind them at all.

Birds such as ducks have their eyes positioned high up on the sides of their heads. This allows them to see all around them, including behind them. They can also see above them. However, their forward view is very limited.

The American woodcock is thought to have the largest known visual field of all birds. It has 360° vision, and can also see what’s going on above it.

Birds of prey have forward-facing eyes. This provides excellent ‘binocular vision’, which means they can gauge distances very well. This is ideal for predatory species, who need to catch prey in order to survive.

Eyes are heavy, liquid-filled organs. Although most birds are flying animals, they have extremely large eyes in relation to the size of their bodies. This show just how important eyesight is to birds.

The size and position of a bird’s eyes are dependent on its lifestyle. Some birds have excellent eyesight for finding prey; other species rely on their eyesight to prevent them from becoming someone else’s dinner.

You can find out more about the amazing world of birds in the following articles: