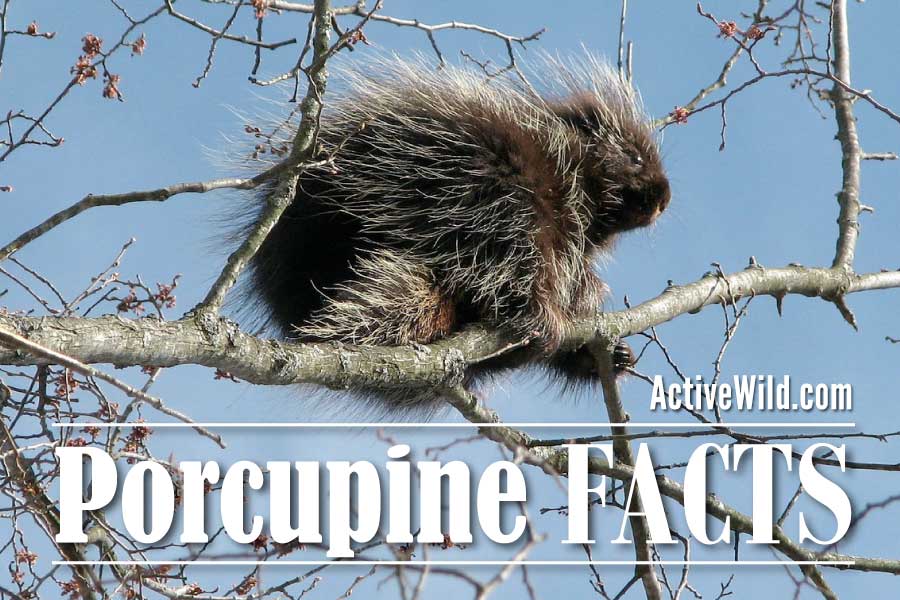 Fun facts on porcupines: find out where these quilled rodents live, what they eat, how they defend themselves and much more…

What Is A Porcupine?

A porcupine is a large rodent with a distinctive coat of protective quills.

The two porcupine families are not closely related. The similarities in their appearance are due to convergent evolution (the process in which unrelated species develop similar characteristics independently of each other).

Where Do Porcupines Live?

The North American porcupine is found in temperate forests and shrublands as far north as southern Canada and parts of Alaska. It is the only porcupine found in the USA and Canada.

The largest porcupine is the North American porcupine Erethizon dorsatum, a member of the New World porcupine family.

The name “porcupine” is derived from the Latin words for “pig” and “spine”.

Porcupines are not closely related to hedgehogs, despite the spiny appearance of both groups of animals. (Unlike porcupines, which are rodents (members of the order Rodentia), hedgehogs belong to the order Eulipotyphla.)

All porcupines have an acute sense of smell.

Porcupines have an average lifespan of 15 years in the wild. In captivity, some have lived to be as old as 20!

Porcupines aren’t very social and spend most of their time on their own.

Male porcupines are extremely vocal during the mating season, when they fight over mating rights to females.

Female porcupines give birth to litters of between one and three young, typically once per year. The gestation period can last anywhere from 16 to 31 weeks, depending on the species.

Porcupines are born with their eyes open and have soft quills which take from a few hours to several days to harden.

Porcupines mature between nine months and 2.5 years of age, depending on species.

What Do Porcupines Eat?

Porcupines are mostly herbivorous. Their diet consists of vegetation such as grass, leaves, fruits, nuts, seeds and buds.

Some porcupines also chew on bones. This helps keep the porcupine’s teeth sharp and also supplies them with minerals.

Some Old World porcupines may occasionally supplement their plant-based diet with insects and small vertebrates such as lizards.

A porcupine’s quills are modified hairs that are embedded in the muscles of the skin. The quills are coated with keratin, the same natural material out of which our nails are made!

The quills are a defensive adaptation to protect the porcupine from predators.

If a porcupine feels threatened it will first raise its quills as a warning. If this doesn’t work, the porcupine will attack by turning round and moving, quills-first, towards the predator.

Some porcupines make a chattering sound with their teeth to warn predators to stay away. Another defensive adaptation used by some porcupines is to emit a foul-smelling odor.

Contrary to popular belief, a porcupine can’t shoot its quills! However, the quills will detach if they become embedded in another animal’s skin. This can lead to infection, or even death.

The quills are sharp and have between 700 and 800 overlapping scales or barbs which make them difficult to remove.

Porcupines grow new quills to replace the ones they lose.

Antibiotics on the quills are thought to be produced to protect the porcupine from infection if it pricks itself!

North American porcupines can have 30,000 or more quills!

The porcupine with the longest quills is the crested porcupine, whose quills can reach up to a foot (30 cm) in length!

New World porcupines are capable climbers and spend much of their time in trees. Some species have prehensile* tails that help them to climb.

The quills of New World porcupines are located across the back, legs, and tail and are mixed with the animal’s underfur, bristles, and guard hairs.

When threatened, the quills jut out in all directions. New World porcupines will lash out at predators with their quill-laden tails.

New world porcupines are dark brown to back in color. Their quills often have white markings, which stand out against their otherwise dark color. This coloration warns even color-blind predators that the porcupine is potentially dangerous.

The North American porcupine is the largest of all porcupine species, and the only porcupine found in the US and Canada.

The North American porcupine is usually found in forests, where it spends time on the ground as well as in trees.

North American porcupines have an appetite for wood and use their large front teeth to help them munch on bark and stems. They have even been known to invade campgrounds and chomp down on canoe paddles!

All other New World porcupine species are found in tropical forests across Mexico and South America.

New World porcupines of genus Coendou are known as the “prehensile-tailed porcupines”. Porcupines in this group are adapted for life in the trees and have long, muscular tails that curl around branches for support. They also have long claws that help them to climb.

Unlike their New World cousins, Old World porcupines have quills that are grouped in clusters, rather than mixed with other types of hairs.

When erect, a porcupine’s long quills can make it appear two to three times larger than it actually is.

Old World porcupines have short, dense quills on the back and rear. At the base of the tail the quills are hollow and rattle when they move, sounding a warning to potential predators.

The largest of the short-tailed porcupines is the African crested porcupine (Hystrix cristata). It is found in sub-Saharan Africa, North Africa, and Italy. It lives in hilly and rocky habitats.

The long-tailed porcupine (Trichys fasciculata) is the smallest of the Old World porcupine species. It resembles a spiny rat and is just 19 inches (48.3 cm) in length.

Overhunting by humans has been cited as one of the biggest threats to porcupines.

In some areas porcupines are seen as serious agricultural pests, and as a result are persecuted by humans.

Porcupine quills are a favorite ornament and good luck charm in Africa, where the animals are also hunted illegally for their meat. In North Africa they are used in traditional medicine.